To celebrate their 65th anniversary, AKG have launched limited-edition versions of two of their best-known products: the C451B pencil condenser mic and the K702 open-backed headphones. The C451B differs from the original only in colour — the anniversary edition is black — so there's little point in me reviewing them here. The Anniversary Limited Edition K702s, though, vary slightly from the standard model. They boast identical specifications, but the drivers of the Anniversary edition are matched for optimum stereo performance, and the physical design has been changed. This is apparent both in the colour scheme, which is now all black with details picked out in blue and silver, and in the leather headband, which has lost the 'bumps' that annoyed some K702 users and is now made from extremely soft, high-quality leather. 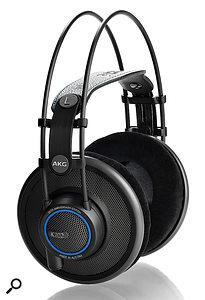 We weren't supplied with a standard pair of K702s for comparison, although we've used them in the past and there's no suggestion that the birthday boys sound significantly different, apart from any minor improvements to the stereo image brought about by the matched drivers. Comfort-wise, the new headband is certainly soft, but unfortunately it was also too large for my head, so the weight of the phones was supported mostly by the earcups, rather than by the headband. This wasn't uncomfortable, as they are very light, and a colleague remarked that they were slightly more snug-fitting than the standard model, but in general I like my headphones to grip the head slightly more firmly, and found the K702s a bit prone to slippage, so there's room for improvement here.

In use, they deliver the sonic detail and focus you'd expect from a good pair of open-backed headphones. Compared with my own Shure SRH1840s, the K702s require quite a bit more level from the headphone amp, and come across as being ever so slightly 'scooped' in the mid-range, with a gentle rise in the high frequencies, but not so much as to misrepresent source material or exaggerate sibilance. The bass end is balanced, transient detail is very good, and it takes no time at all to become accustomed to the frequency response. I'd be more than happy to mix on these headphones. Not everyone will feel that the hefty premium for the Anniversary Edition is worthwhile, given that most of the differences are cosmetic — but they left me thinking that the standard K702s might just be a bit of a bargain! Sam Inglis