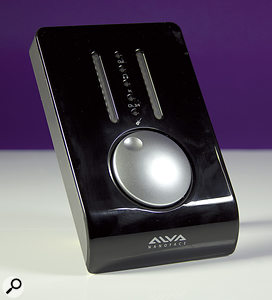 The Nanoface is the very first audio interface to be offered by German company Alva. This development comes partly by way of a very close relationship with RME, for whom Alva supply breakout cables and other accessories. It's no surprise, then, that the Nanoface bears a striking resemblance to its more lavish cousin over at RME — the Babyface — and employs a similar 'modular' system of core interface plus breakout cable. In outline, its specification includes two microphone inputs, two further line inputs, four line outputs, S/PDIF digital I/O and MIDI In and Out.

One Knob To Rule Them All

Out of the box, the simple and sleek aesthetics are plain to see, and it's very surprising how light in weight the case is without the range of controls and sockets that usually inhabit an audio interface. The concept here is simplicity: a single control is used to navigate a series of modes and operate every aspect of the interface, while its small size makes it portable. Rubber feet on the underside ensure that it sits flat on working surfaces and doesn't move around, and the case, rotary encoder and onboard meters look identical to those used in the construction of the aforementioned Babyface. Despite its diminutive weight and dimensions, nothing feels flimsy.

A short breakout cable attaches to the unit by means of a 15-pin D-Sub connector, and houses the majority of the available inputs and outputs. Aside from the two microphone inputs, the remaining line ins and outs on the breakout cable have unbalanced phono connectors. This is slightly frustrating, given that most users would need to purchase additional adaptors or alternative cables to interface with their existing equipment. Jack connections — even unbalanced ones — would have been far preferable in this respect. On the case itself, there is a quarter-inch stereo output for headphones (which doubles up as line outputs 3-4), an instrument DI input and optical S/PDIF connections. The unit is bus powered, and the supplied USB cable comes with two connectors at the computer end. This is in case a single USB port supplies less power than is required. In practice, however, the Nanoface seemed to work fine using one port on my laptop.

The Nanoface's back panel features a D-Sub connector for the breakout cable, optical I/O ports and a USB 2 port.

Installation is a very simple process, with a very lean driver of around 2MB and no bundled DAW software or control panels. I was able to get up and running very swiftly indeed, but unfortunately some users may not be quite as lucky in this respect. As with other USB audio interfaces, some people with very recent Mac hardware running Mountain Lion are reporting problems getting the Nanoface to function properly, and perhaps would be advised to hold fire for a little while. Alva are working very closely with Apple for a fix, and hope that the problem will be resolved very soon. Meanwhile, there is a workaround available that can be viewed on the official Nanoface forum.

I also encountered a setback in the Mac driver that prevents changes to the speaker configuration from being applied in Audio/MIDI Setup. For example, it isn't possible to change from a standard stereo configuration to, say, a 'quadraphonic' setup, with the four analogue outputs feeding four speaker channels. Although, in practice, this will not affect the majority of users, those wishing to play discrete multi-channel audio out of applications other than their DAW may well be disappointed. On reporting this problem, I was advised that a fix will be underway as soon as the Mountain Lion issues have been ironed out.

A couple of useful developments have been made since the time of launch and are not covered by the current promotional literature. Firstly, the pass-through of an AC3 stream via the digital output is now available to Windows users for connection to domestic surround decoders. This function will follow in a later version of the Mac driver. Additionally, a graphical user interface will soon be released for the Nanoface to allow quick access to each setting without using the rotary control. Alva's UK distributors were kind enough to send me screenshots of the application and it looks to be a very neat additional feature. 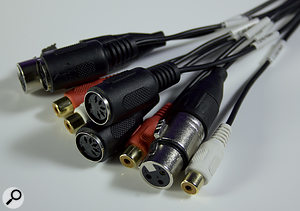 The breakout cable with MIDI, RCA Phono and XLR connectors.

With the breakout cable attached, it is a definite challenge to keep all the cables tidy on the desktop. I if I owned a Nanoface, I would certainly consider investing in the optional extension cable to keep things tidy. Navigating the various functions is fairly straightforward once you get used to the different modes and 'click and twist' combinations of the encoder. With regular use, I could envisage this becoming second nature, and especially efficient when playing an instrument when recording. A sticky label is provided to remind the user how to access the most fundamental settings until they become familiar with the moves. 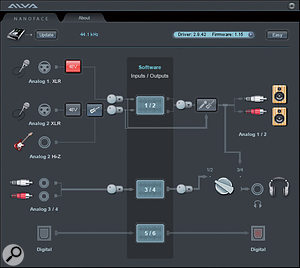 The soon-to-be-released graphical user interface for the Nanoface.The microphone preamps provide 50.5dB of gain, and neither a pad or high-pass filter are present. They are impressively clean — even at maximum amplification — and this performance would put many interfaces in this price bracket to shame. Phantom power is applied to each microphone input individually, and, unlike some other interfaces, it is surprisingly difficult to turn it on or off in error (always a concern when using delicate ribbon microphones). A definite click and three-second hold is required, assuming that you are first in the correct mode. Helpfully, all outputs are muted as phantom power is toggled on or off — a very neat feature indeed. For each preamp, gain is applied using the encoder in 2.5dB/2.75dB increments, with the amount being shown by the meters. Within a second of setting the gain, the meters automatically switch to displaying the input level. A two-page spread in the glossy user manual illustrates exactly what the meters show for every input, output and gain setting, but in practice this is rarely needed. The absence of numerical values actually encourages you to follow the meters and use your ears.

While recording, small buffer settings of 32 samples worked without a hitch, and I was also able to route inputs through reverb effects during recording without any obvious latency. To overcome any potential problems with latency, a hardware monitoring option is offered for inputs 1-2 only. When enabled, this routes inputs 1-2 directly to their corresponding outputs, for zero-latency monitoring. Careful adjustments to the faders of tracks already recorded in the DAW are used to create a balance between playback and input signals, since a separate 'mix' setting is not provided. With hardware monitoring switched on, inputs 1-2 are automatically mixed to a mono signal at the headphone output so that sources are not hard panned in the foldback mix.

During a recording session, the Nanoface worked exactly as planned and the flow chart on the sticky label negated the need to reach for the user manual at all. Despite a few unplanned cycles through the modes, due to enthusiastic clicking, it was incredibly quick and straightforward to get recording underway. Results were noise-free and very pleasing in quality.

Aside from some teething problems with drivers and a few minor niggles, the Nanoface is a stylish, compact and great-sounding interface that features pristine preamps, smart metering and a versatile feature set. While the single-control operation won't appeal to all, the rotary encoder soon becomes fun and efficient to use, and the forthcoming GUI application will make operation even more straightforward. If sound quality is important to you, this pocket rocket should be near the top of your list.

The Native Instruments Komplete Audio 6 is perhaps the closest competitor in terms of specification. It has an almost identical offering of inputs and outputs, but level metering is far more limited. The Komplete has four dedicated analogue outputs, as opposed to the dual-function headphone socket of the Nanoface, and all line connections are terminated as balanced jack sockets. Two instrument inputs are available simultaneously, and the provision of 'combi' sockets means that users have line-in options for inputs 1-2. Meanwhile, the Komplete Audio 6 has a single MIDI Output, compared to two on the Nanoface. Digital in/out is via RCA S/PDIF connectors.

The M-Audio Fast Track C400 is also worth a look at this price level. While it only has two analogue inputs, its four dedicated analogue outputs make it ideal for connecting two sets of monitors. The monitor controls allow for fast switching between outputs 1-2 and 3-4, and there are also zero-latency DSP effects available on the foldback mix. The microphone preamps do have a sensitivity pad, but metering isn't as advanced as on the Nanoface. Like the Komplete Audio 6, digital in/outs are RCA S/PDIF and there is a single MIDI Output.

A versatile interface with impressive sound quality. Driver updates and imminent GUI software will help to seal the deal.