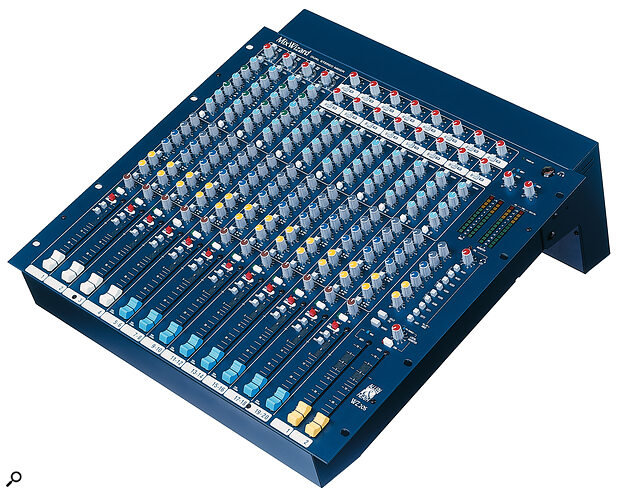 If you are short of space, the prospect of fitting a 40‑input dual‑channel mixer into a 10U rackmounting case will certainly be attractive. Martin Walker follow some leads.

Not content with adding a little magic to mixer design with their MixWizard series, Allen & Heath now seem to be making my wishes come true as well. In the Christmas wish list in SOS December '97, I asked for a mixer with a lot more stereo inputs — and here it is (finally)! Many musicians use a number of MIDI synths and samplers, most of which provide a main stereo output, in addition to a number of mono outputs for adding outboard EQ and effects to specific sounds. This leaves a lot of people, myself included, with mixer requirements that are largely uncatered for by most manufacturers.

Many people in this situation end up buying desks with lots of identical mono channels, and using pairs of these with identical settings, one panned hard left and the other hard right. Thus, a 24‑channel desk might be used in an 8‑stereo/8‑mono configuration. This may look impressive, but it's difficult to do anything creative when you've got to simultaneously turn two controls every time you want to tweak a stereo channel. Moreover, the chances of getting the EQ settings identical on each side are small, and this certainly won't help your stereo imaging.

The Allen & Heath MixWizard WZ20S changes all this by providing eight dual‑input stereo channels, four mono ones, and two further stereo inputs with more basic facilities — a total of 40 inputs in a 10U rackmounting space. Let's explore further to see how it's done. 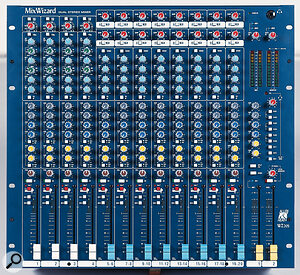 All of the units in the MixWizard series feature similar blue rackmounting cases with a 'Quick Change Connector' — a rotatable housing for all the sockets, the angle of which can be adjusted for desktop or rackmount use. The new WZ20S is aimed at MIDI studios, live‑keyboard and small‑broadcast use, as well as at club installations. Its four mono channels have both XLR and TRS inputs along with a switchable 30dB pad so that you can use either for mic‑ or line‑level signals. Phantom power can be supplied independently to each of the XLR inputs via switches on the socket‑housing pod. The inputs are followed by a gain control, providing 40dB trim, and an unbalanced insert point, which is accessed from a TRS jack. Then comes a 12dB/octave filter at 100Hz followed by the four‑band EQ with its two swept mids. Each band has a ±15dB range and a fixed, fairly low Q, and the bands overlap slightly — HF is fixed at 12kHz, MF1 is variable between 500Hz and 15kHz, MF2 between 35Hz and 1kHz, and LF fixed at 60Hz. An EQ bypass switch is provided for comparison purposes and for maximising the signal quality when the EQ is unused. After the EQ section there is an impedance‑balanced Direct Out — this is normally post‑fader, but this can be altered internally for pre‑fader operation.

The rear panel of the MixWizard WZ20S offers an unusually flexible and comprehensive array of connection possibilities.

Allen & Heath always seem to manage something a little different in every mixer, and this time they have extended the idea first seen on the WZ14:4:2 by having two separate sets of inputs for each stereo channel. Each has its own activation switch and gain trim control, so that you can choose either one or mix both together. The 'A' inputs are on twin phono sockets, and the 'B' inputs are a pair of balanced quarter‑inch TRS jacks. The Gain trim controls only provide 30dB range, but this is still a very versatile feature — for example, many people have stereo gear which only needs patching in occasionally, and here the dual inputs would save fiddling around at the back of the desk.

The EQ section for stereo channels is not as comprehensive as it is for the mono channels. There are still four bands available, but all the bands are fixed‑frequency (HF is again 12kHz, MF1 is 2.5kHz, MF2 is 250Hz, and LF is 60Hz). However, the frequencies have been chosen well, and should provide quite enough control for most sources. In addition to this, the 100Hz filter is replaced by a useful Mono switch on these channels. Sends are normally mixed to mono, but once again, this can be changed internally so they are used in stereo pairs.

From this point onwards the mono and stereo channels are identical. There are six Aux sends with individual rotary controls: sends one to four can be switched pre‑ or post‑fader on a channel‑by‑channel basis using one set of latching buttons, and sends five and six with a second set. The bottom section of each channel comprises a 100mm long‑throw fader, a Pan control (Balance for the stereo channels), a channel activation switch (with associated green LED), a PFL switch, and two buttons for routing the channel to each of the two stereo outputs — Mix1 and Mix 2. The PFL switch has an associated red LED, which lights dimly to indicate PFL mode, and also doubles as a peak indicator by lighting at full brightness if the signal level comes within 5dB of clipping.

Starting at the top, the Master Section features a power LED, a headphones socket on quarter‑inch jack with associated volume control further down and rotary level controls for two additional stereo inputs on TRS jacks at 10dBV line level. Ext1 can be routed to Mix1, Mix2 or both, while Ext2 can be sent to Mix2 only. The routing switches are flush with the panel, in order to avoid accidental operation, and are only accessible using a sharp object. Both appear as selections in the monitor section as well.

Next are two stereo pairs of 12‑segment LED meters. The first pair permanently displays the level of Mix1, while the second can receive a variety of signals. It defaults to Mix2, but if any channel PFL button is depressed this level is displayed instead, and a large red LED beneath the meters is illuminated. Nine latching push buttons in the Monitor section switch monitoring to any of the sends (whose master level pots are alongside), Ext1, Ext2 (pre‑fader) or Mix 1. A neat touch is that the second pair of meters can be split using the Split PFL button, so that the left one displays PFL levels, while the right one shows mono monitor levels.

A Mono switch lets you monitor the summed left and right channel signals to check for mono compatibility and phase problems. You can adjust the control‑room monitor level independently of the headphone level, using the Local Monitor pot, and a Dim switch with red LED indicator mutes the monitor signal, though this can be reconfigured internally to drop the level by 20dB. Finally, a recessed PFL Enable switch lets you monitor the PFL buss only on headphones, leaving the control‑room monitor signal unchanged — a welcome feature

Both Mix1 and Mix2 outputs have full‑length faders, and are provided with pre‑fader TRS inserts and balanced XLR output sockets. Mix2 has additional TRS outputs and an XLR mono output (which you could use as a mono feed for broadcast use, or for a centre fill or sub‑bass unit). Another tamper‑proof switch lets you route Mix1 to Mix2, treating it as a stereo subgroup.

Thankfully the power supply is built‑in (though the push‑button power switch would be better placed on the front panel) and the back panel is clearly laid out with all audio connections except the stereo 'A' inputs and the inserts being balanced.

The WZ20S is clean and quiet, and the EQs provide just the right amount of control where required. On the mono channels there's loads of flexibility, and on the stereo ones the centre frequencies are well chosen. Sound quality is excellent, a testament to Allen & Heath's Minimum Signal Path design. The many switchable options provide great versatility, though it would have been useful to have a solo‑in‑place option as well as the PFL

After a little use, all the controls are smooth in operation, with no extra stiffness in the stereo EQ pots, and the channel spacing is wide enough that the fader calibration marks are visible even when the caps are alongside the routing switches. The wide channel activation switches look and feel better, but it would still help if the sides of the buttons were a different colour, to make their status more obvious at a distance. I also have reservations about using it on the desktop unless the sharp corners of the rack ears are covered — I skinned my arm yet again! — but it's ideally proportioned for rackmount use.

The WZ20S should appeal to the many people who need lots of stereo inputs mixed down to a stereo output, especially with the additional option to add RIAA preamps for connecting up to eight turntables if required. If you are thinking of buying a mixer with 32 or more mono channels for mainly stereo sources, the WZ20S will probably be far easier to use and will take up a lot less room. Although it's not cheap, this one is built to last the course and it's never a good idea to skimp on your mixer anyway. The WZ20S is very much a case of 'never mind the width — feel the quality'.

Tweakable Inside And Out

As mentioned in the main text, there are a number of configuration options which are only available by altering connections on the individual channel PCBs. Although these alterations involve only fairly straightforward soldering, you'll have to seek the assistance of a qualified service technician if you're a little rusty with the soldering iron.

Allen & Heath are also offering RIAA preamp cards as a cost option, each card allowing two turntables to be connected directly to the inputs of two adjacent stereo channels. A maximum of four such boards can be fitted, if necessary. A further cost option is a Sys‑Link connector, which allows two WS20S mixers to access the same busses and PFL‑switching logic, effectively forming a single mixer with twice the number of inputs. The MixWizard also supports a number of features specifically suited to broadcast use, such as fader‑start and auto‑dim functions.

This is one of the few available mixers properly designed to cope with lots of stereo sources. The WZ20S may not be the cheapest solution, but it crams a lot of mixer into your rack and cuts no corners when it comes to sound quality.