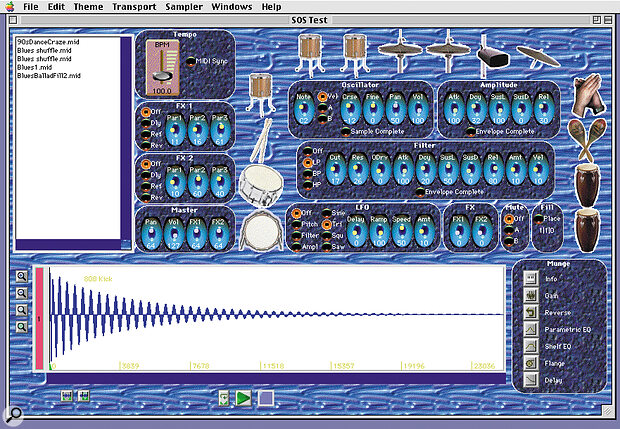 Several of Voodoo's customised views will have you reaching for the Ray‑Bans!

As computer power grows, so an ever‑increasing range of studio equipment is becoming available in emulated form, and the latest software instrument to appear is a percussion sampler/sequencer from US company Bitheadz. Nicholas Rowland tests it out.

We've had the Recessive '70s, the Selfish '80s and the Caring '90s. Now prepare to enjoy the Virtual Zeros. 'Virtuality' — reproducing the functionality of hardware in software — seems to have become the major driving force in musical technology. Forget synths the size of elephants, forget even synths the size of video cassettes: these days, you're more likely to get a CD‑ROM containing the Albert Hall and the London Philharmonic Orchestra.

Voodoo is the latest product to follow this virtual trend. It comes from Bitheadz, those nice people from sunny California who have also brought us the Retro AS1 virtual analogue synthesizer, and the Unity DS1 virtual sampler. To put it in a drumshell, Voodoo is a software beatbox that allows you to assemble kits from samples, generally kick 'em around with various sound‑manipulation tools and then record patterns either as straightforward digital audio or as MIDI files that can be exported to other programs. As Bitheadz are at pains to point out, Voodoo offers three technologies in one: a MIDI sequencer with record and playback support (and MIDI sync to boot), a sample editor, and a synth engine with programmable envelopes, filters, LFOs, and real‑time effects.

It comes as no surprise to find that much of the technology behind Voodoo — notably the synth engine, MIDI input utilities, and drivers — is borrowed wholesale from Unity DS1. Indeed, it's the Unity control panel that pops up whenever you need to make changes to the overall system settings, MIDI input channels and so on. Note that if you already own Unity, you'll have to upgrade to version 1.2.4 or later before installing Voodoo: the necessary updater is included on the Voodoo CD‑ROM.

The CD is password‑protected, with the secret code printed on the CD case — lose this and you'll get no further, my friend. Mac users will require a 120MHz PowerPC or better, while PC people will need a 200MHz Pentium or above. The PC crowd will also have to wait a little while as the Windows version isn't due along for a few more weeks. Also recommended as minimums for both platforms are 64Mb system RAM and an 800x600‑resolution colour monitor. The program itself is fairly modest in its requirement for hard disk space, but if you want to install all the included drum sounds, loops and MIDI files, you'll need a fairly hefty 250Mb of spare room. Start deleting those unnecessary Internet downloads now!

I was testing out the Mac version and, apart from having to delete rather a lot of actually quite necessary Internet downloads from my overloaded disk, installation was straightforward. Thanks to the underlying Unity system, Voodoo had soon made contact with the rest of my MIDI studio through the interface attached to my serial port. The program will also automatically find its place within a system based around Opcode's OMS or MOTU's FreeMIDI — just select the relevant configuration option. In terms of sound output, Voodoo is happy to go native through the Mac's inbuilt audio system, or it will use the drivers of any installed ASIO card. The program is also compatible with Steinberg's Rewire technology and MOTU's MAS 2.0 audio output, allowing you to run Voodoo's output as a real‑time track within Cubase or Digital Performer respectively. This in turn gives you the opportunity of applying VST or MAS plug‑ins to Voodoo‑created drum tracks.

Fire the program up for the first time and you're presented with a single screen with 14 virtual drum pads, represented by somewhat naff images of various drum kit and percussion instruments displayed on a grey background which clearly hails from Crinkly Bottom. While you can customise the screen view by selecting different backgrounds (even creating your own) as well as changing the icons used for individual drums, be warned that all the factory options appear to have been inspired by Polynesian graffiti artists. While colourful, they are certainly not easy on the eye: Bitheadz really should include a pair of sunglasses and a pack of Anadin with every copy of Voodoo shipped. On a practical note, too, the more garish screens and sub‑menus are actually quite difficult to read, even when the main editor page is expanded to fill the screen of a 17‑inch monitor.

Graphic dysfunctionality aside, it doesn't take long to get the hang of the program's basics. First, load up a factory kit (these cover familiar rock, jazz, country and TR808‑style territory), then click on an icon or press an appropriate QWERTY key to trigger a sound. You can also play sounds from an external MIDI keyboard, with each pad freely assignable to the key of your choice.

Selecting a pad also brings up the sound's waveform in the editor window in the lower half of the screen. From here you can perform a series of 'munging' functions — you can add gain, reverse some or all of the sample, apply the parametric or shelving EQ, or add flange or delay (a two‑tap model with individual control over each tap). The editor window itself is very easy to use, particularly in terms of zooming in on portions of the sample you want to change or truncate, and also in terms of setting up loop points. Pitch‑shifting effects can also be achieved via the pop‑up 'Info' box, which lets you alter the sample rate, root note, and loop points directly.

Each of the 14 pads can have up to four samples assigned to it, with precise control over the velocity/controller switchover points to enable you to create complex multisamples — great for either making drums sound more realistic or for introducing out‑and‑out weirdness. Flying in your own samples is also easy: either use the Import Sample function on the menu bar, or simply drag and drop from the desktop to the sample display. The Mac version of Voodoo supports AIFF, Sound Designer II, Unity DS1 and audio CD sample import (providing you have QuickTime v3.0). The full Windows spec isn't available as yet, but presumably it will at least deal in WAV currency. 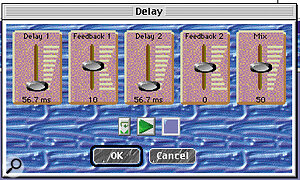 Further sound‑sculpting options come via the Voodoo (née Unity DS1) synth engine. An amplitude envelope is available for each pad, offering programmable attack and decay times plus sustain level, sustain decay, and release time. This features a complex Envelope Complete parameter, the main use of which is to allow drum sounds to play for the entire length of the envelope even if they receive a MIDI Note Off command — useful for sequences that have very short note durations.

The filter section offers three different types (low‑pass, band‑pass, and high‑pass), with the expected programmable cutoff and resonance controls. For extra reinforcement in the grunge department, you can call on the overdrive parameter which boosts the input to the filter section. As well as the cutoff knob itself, the filter cutoff can be controlled to a varying extent by the filter envelope and the key velocity.

For good measure the filter cutoff can also be modulated by the LFO, which offers a choice of sine, triangle, square and sawtooth oscillator shapes. The LFO can also be assigned to pitch (for vibrato‑type effects) and amplitude (for tremolo‑type effects). And finally, there's the oscillator, offering coarse and fine tuning and pan and volume controls per pad. Given this little lot, you can turn the most innocuous jazz rimshot into a headslicing howlarama — great if you're into that techno dance groove thang.

Voodoo also features two banks of effects. These are global in operation, with the effects send programmable for each pad. Effects types on offer comprise delay, reflection and reverb, with three programmable parameters per effect. While the quality is not jaw‑dropping, the reflection and reverb algorithms certainly help to add a certain je ne sais quoi in the ambience department.

It's the sequencer department, though, where Voodoo's design tends to come a little unstuck. In essence, it's a bit like a hardware drum machine. You create separate patterns (or import pre‑recorded ones in the form of MIDI files) and then string them together to make longer songs. These can then be exported as MIDI files or printed to hard disk as a complete performance. This latter option is actually the most creative, as you can then re‑import the resulting sound file into the sample editor window and work on it with the munging tools already described.

While the sequencer offers all the expected bells and whistles in terms of flexible time signatures and pattern lengths, available quantise values and so on, operationally it's a bit tedious to use, particularly when recording your own rhythms. For example, all editing of rhythms is done via a MIDI event list which, while it does offer the opportunity to tweak things in great detail, is not as immediate as a grid‑based system such as the Cubase drum editor. On the plus side, once you really get to know the Voodoo system, you'll find it capable of some very creative rhythm programming, particularly with its many options for batch tweaking of events. The options for playback of songs are also pretty comprehensive. Another plus is that virtually all parameters are controllable from external MIDI devices, which — given the right hardware — should help to offset the program's otherwise rather fiddly onscreen operation.

To be honest, Voodoo failed to put me completely under its spell. Initially, I found the idea of this virtual drum machine very appealing. After all, who could fail to be enticed by a beatbox offering the facility to load any sounds and then tweak them with a comprehensive set of sample/synth facilities? However, in practice the product proved somewhat underwhelming: operation tends to be a bit tedious due to the constant to‑ing and fro‑ing between the various virtual knobs, while the creation and manipulation of rhythm patterns is just too cumbersome for my liking. In the end, I found it a lot easier to create my basic patterns in another program, then import them into Voodoo to make use of its sonic manipulation features. If you're prepared to stick with the program, its virtues in the synth/sampling departments (of which there are a great many) will begin to outweigh the vices of the sequencer. Certainly, Voodoo is powerful and well‑specified in theory — it's just that, in practice, it doesn't quite spin the magic as it should. I also have to report that my copy was pretty unstable, crashing at least twice per session. And it's certainly dressed in the wrong virtual clothes. I suggest a return to the drawing board, with a more sombre palette of felt‑tip pens!

Voodoo Main Features At A Glance

The toytown feel of the program undermines its potential for sophisticated rhythm‑making. While Voodoo may in theory have more raw power than your average real‑world drum machine, it really does need a grown‑up user interface before I'd be tempted to let it live on my hard drive.