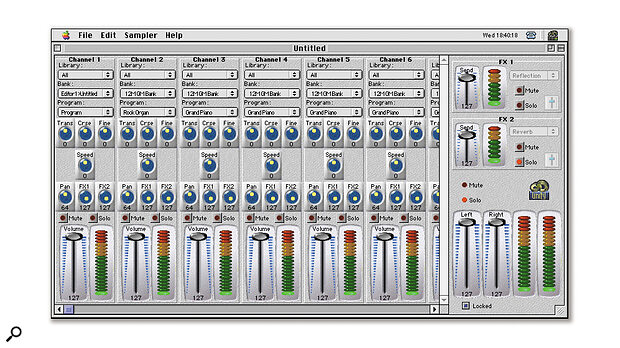 Bitheadz' Unity DS1 is one of the best‑established software samplers, and the latest incarnation offers several major new features, including DirectConnect support for use with Pro Tools. Derek Johnson and Debbie Poyser sample its delights.

When we reviewed the first version of Bitheadz' Unity DS1 software sampler, back in April last year, it already came across as a well‑developed, thoughtfully designed program. Bitheadz haven't allowed the grass to grow under their feet, though, and the intervening year has seen them working to correct deficiencies in Unity and add extra features. The upshot of their efforts is a brand‑new version of this PC‑ and Mac‑compatible sampler. 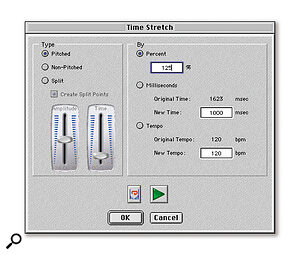 The Time Stretch edit window — note the options for defining stretches in terms of percentage, time or tempo.

Unity is a modular program, consisting of five applications, that aims to offer everything a hardware sampler would. The Editor is the main business end, used for actually sampling audio, DSP processing, looping and other editing, arranging of samples into multisample groups, and graphic Program creation. The Editor is also used to set up complex modulation routings, and a Synthesize option provides basic waveforms for creating sounds from scratch.

The Mixer application allows Programs in a multitimbral sequencer setup to be balanced with the usual mixer‑type facilities such as pan and level, and gives access to global effects, while the Keyboard allows Unity sounds to be auditioned even if no external keyboard is connected. The MIDI Processor is where Program splits and layers are set up and where Unity's sophisticated, MIDI‑sync'able arpeggiator is accessed. Then there's the Control Panel, where crucial configuration decisions, such as how many voices Unity should play with, the maximum CPU power it's allowed, buffer length and RAM reservation, are made.

The last bit of Unity, which you never see, is the sample engine that all the applications use. It's the key to Unity's ability to allow you to access its sounds from another application, such as a sequencer.

Even in version 1, Unity had decent maximum polyphony of 64 notes (on the best‑specified computers), but its multitimbrality was rather limited, at 16 voices. It's all change in both departments, because up to 128 stereo voices and 128 MIDI channels are now offered. This easily exceeds the spec of hardware samplers. Apparently, optimisation for Apple's G4 Velocity Engine and Pentium III processors has made such figures possible, but the RAM and processor demands for running Unity at full tilt will still be considerable.

To cope with the extra MIDI parts, the Mixer, previously restricted to 16 channels, is now expandable. You still can't resize channel strips to see more in a window, though. The mixer has been enhanced in other ways, too. Virtual pots are now provided instead of sliders, and there are new Transpose, Coarse Tune and Fine Tune knobs, plus one intriguingly labelled 'Speed'. Without jumping too far ahead of ourselves, samples that have been correctly set up can have their speed altered in real time, without a change in pitch, using this knob.

Next on the improvements list is better integration with audio hardware. Unity now has DirectConnect support, for running with Digidesign's professional TDM Pro Tools systems and 001 budget Pro Tools. Unity voices can be routed through Pro Tools mixer channels, treated with the system's plug‑ins, and sent through the outputs of Pro Tools hardware. DirectConnect was seen working between Unity and TDM Pro Tools at the SOS offices, and we also set it up, after some initial hiccups, with our 001 system. We noticed only a slight increase in latency compared to playing Unity direct from a keyboard, but we did experience occasional crackles. Also, with 128Mb of RAM in our G4 and only Unity and the PT software running, we got prompts that memory was low — even before we started doing anything serious. The upshot is that DirectConnect works, but you'll need lots of RAM.

For users of ASIO and Direct I/O‑compatible audio hardware, the big news is that up to 32 channels of audio can now be routed from Unity to the outputs of your card(s), a great improvement over the eight channels offered by the original Unity. Better integration with certain software is also offered by v2 — if your sequencer supports OMS or FreeMIDI patch names, Unity patches are selectable by name from within that sequencer.

A Shift In Time

Possibly the most obvious omissions from the first version of Unity were pitch‑shifting and time‑stretching. Fortunately Bitheadz have added them in v2, in the Editor's 'Munge' menu. Pitch‑shifting provides control over coarse (±12 semitones) and fine (±100 cents) tuning, plus the obscurely named Window and Interpolation parameters. Neither of the latter is explained adequately in the PDF manual, so you just have to experiment. Pitch‑shifting results are good enough for small changes, though artifacts begin to occur at shifts of three or four semitones, even if you tweak Window and Interpolation. The former does have an audible effect on sound quality, and careful tweaking can improve it to an extent.

In the case of time‑stretching, you can choose a pitched or non‑pitched algorithm to suit the programme material, and a stretch value expressed as a percentage, length (in mS) or tempo (in bpm). Unfortunately, time‑stretching didn't work that well for us. The results of making a sample shorter were reasonably OK, but lengthening samples by even small amounts introduced flamming where the sample had been ungracefully chopped up and spliced together, amongst other artifacts. At present, more control and better results can currently be obtained with other software — the shareware DSound Pro editor, for example.

A new DSP function that fares rather better is Split. This process assigns markers to peaks in a sample. The latter can then be divided at the markers into new samples (great for isolating individual hits from a percussion loop). Alternatively, these split points (which you can position yourself) can be used to change the speed of a sample in real time, without affecting its length — which might sound rather like time‑stretching. However, it's not: Bitheadz call the process 'Oscillator Stretch'. It works best on drum loops or samples with definite peaks, and, given the right split points, results are excellent. This could be a great tempo‑matching tool for remixers.

Unity already had a very well‑specified synthesis side, but Bitheadz have enhanced it further with new filter types — Comb, Slope, and Threshold. Effects, too, have been beefed up: in addition to the existing Chorus, Flange, Phaser, Delay, Overdrive, Distortion, and EQ, there's now an effective Compressor with Gain, Threshold, Attack, Decay and Amount controls. Traditional non‑time‑invariant pitch‑shift is available as an insert effect, too, with ±12 semitones of shift (plus ±100 cents of fine tuning). A lush multitap chorus which easily moves into rich flanging territory has been added, offering two sets of delay, feedback, speed and depth parameters, and there's also a new Degrade option, which does real‑time downsampling, reducing sample/bit rate to achieve that fashionable lo‑fi effect.

Staying with sounds for the moment, the free 260Mb of quality samples supplied with v1 of Unity has been revised and augmented, and now stands at over 300Mb. Sounds range from varied instrumental samples, through sound effects, drums and synth samples, to dance loops. There are more orchestral samples, and the previously 8Mb General MIDI sound bank has been expanded to 12Mb. It almost goes without saying that these free sounds are an attractive bonus. With v2 it's possible to load individual sample programs from Banks, instead of having to load an entire Bank, and there's a handy new way to organise Programs into Banks, too.

For creating custom sounds, Bitheadz have now implemented positional crossfading between zones in a multisample. This smooths the zone transitions, though it's slightly more demanding of CPU power. Even more control over Programs is offered by the new microtonal tuning option. As well as Equal temperament and Just intonations, centred around any key, users can now create their own tuning table, either in offsets to absolute pitch or by typing in frequency values in Hertz.

In this short update review it's impossible to cover every enhancement to Unity — we haven't been able to talk about its improved MIDI controller implementation, support for Keyfax's Phat Boy hardware MIDI control box, and the provision of a MIDI File playback sequencer in v2.0.1, for example. But you should have got the idea that Bitheadz are taking their responsibilities to keep Unity in shape seriously. All their improvements are worth having — the extra voices, MIDI parts, and DirectConnect in particular are going to go down well — but we think a bit more work on pitch‑shifting and time‑stretching would be in order. We also had a few inexplicable crashes and thought the PDF manual could have been more helpful on occasion.

Nevertheless, if you have a powerful‑enough computer you'll find Unity is a great sampler that can produce amazing results, and it now integrates even better with digital audio hardware and software.

We reviewed the Mac version 2.0.1 of Unity, but the PC version should be out now. Bitheadz' minimum system requirements are as follows. (We used a 450MHz G4 with 128Mb RAM.)

This is a worthy update to a fine program, but new buyers should make sure their computer is up to the job, especially those wanting to run other applications alongside Unity.