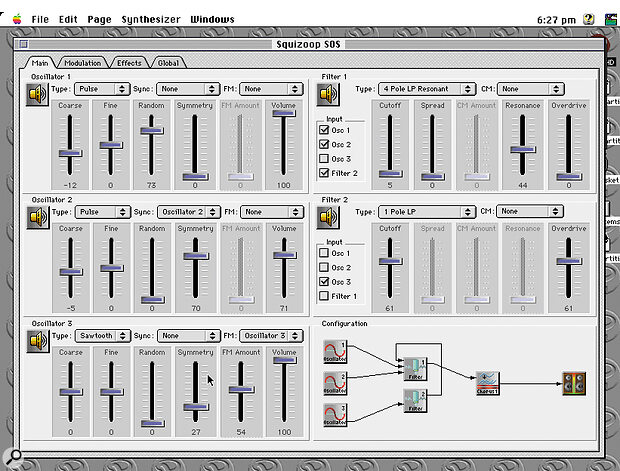 Paul White revisits his old analogue synthesis days via Bitheadz's Retro AS1 — but can a computer screen ever be as friendly as all those knobs and faders?

Not so many years ago, the concept of doing serious synthesis on a computer, at least outside a university, was something that few musicians would have entertained. Nowadays, however, there are several software packages out there that prove it can be done, and done well. The Retro AS1 analogue synth emulator is available only for Macintosh computers, and fast Macs at that, but it is capable of multitimbral, polyphonic operation and can be used from within any sequencer package that supports OMS or FreeMIDI. It can also be played directly from a MIDI keyboard, again via OMS or FreeMIDI, via an on‑screen virtual keyboard or from an external keyboard without OMS or FreeMIDI if the Mac has serial DMA support. The amount of polyphony and multitimbrality is determined by the speed of the host computer, and I think you'd need something pretty cutting‑edge to achieve the maximum possible 16 available parts and 32‑note polyphony. Between four and eight typical parts is a reasonable expectation from an average Power Mac, though the complexity of the voices affects the polyphony, as does the use of FM synthesis.

Retro AS1 comes on a CD‑ROM complete with both OMS and FreeMIDI, though you only get a manual for Retro AS1 itself, and that you have to print out on to over 150 sheets of A4 if you want a hard copy. However, it's a very thorough and well‑written manual. Installation of the synth program is simple enough, but you also have to figure out how to configure OMS or FreeMIDI for your sequencer. Personally, I prefer to work without using either of these environments, but there's no option unless sequencer manufacturers produce drivers specifically for Retro AS1 — there's nothing more Bitheadz can do from their end. Apparently Emagic are working on a driver for Logic; for this review, however, I used OMS on a friend's G3, as my ageing 100MHz Power PC wasn't really up to the task of running Logic and Retro AS1 at the same time, though it could manage Retro AS1 on its own. Realistically, anything slower than a 166MHz Power PC is unlikely to give satisfactory results.

Once installed, you have a fully configurable, programmable virtual analogue synth that can be operated from a small number of windows containing control panels with movable sliders and patching menus. Thanks to OMS, it appears within your sequencer in the same way as any hardware synth and can be treated accordingly, with the sound output taken either from the Mac's own audio out jacks or via a compatible soundcard such as Digidesign's Audiomedia III. 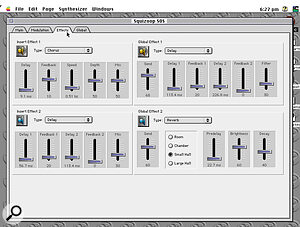 Retro AS1's effects can be used globally and as inserts on each part.

The synthesizer runs at 44.1kHz and produces a clean, 16‑bit output. It responds in real time with no perceptible delay, and there's no limit to the number of user presets that can be stored over and above the 1000 patches provided. To prevent it stealing processing power that your sequencer needs, Retro AS1 also includes a CPU‑limiting facility so that you can 'cap' the amount of processor power it takes. What's more, if you want more polyphony than your computer can give, it's possible to write the synth output to an audio file to play back within your audio/MIDI sequencer. On top of this you get a mixer page to balance the levels and pan positions of each part as well as the ability to add basic effects such as reverb, delay and chorus.

Behind the deceptively simple control panels lies a very complex synth that can have up to three oscillators per voice as well as LFOs, and all the usual saw, pulse, triangle and sine waves can be generated along with noise. For greater tonal flexibility, the waveform symmetry can be varied and one oscillator can be used to sync another for that hard‑edged phase sync sound. It's also possible to experiment with FM by using one oscillator to modulate the frequency of another, and there's the option to add distortion within the filter.

A synth is generally only as good as its filters and here you get a lot more choice than on a typical 'genuine' analogue synth. Up to two filters can be used per voice, and these may be set to one of seven filter types including 4‑pole resonant, low‑pass, high‑pass, band‑pass and notch. The filter frequencies may also be modulated by the oscillators, and one filter can have multiple inputs.

The other key to a flexible synth is the way in which the various blocks can be patched and used to modulate each other. Retro AS1 certainly doesn't skimp in this area, and it's also possible to assign up to four parameters to real‑time MIDI control. Though the synth doesn't have an obvious counterpart in the real world, I found it to be generally comparable with an Oberheim Matrix 1000 in terms of its complexity and flexibility, and though the sound isn't the same, it can be brought very close with a little careful programming.

Because all the parts are mixed down to a single stereo output, the ability to add effects to individual parts is very important, and Retro AS1 makes provision for two insert effects per part. You can also add two global effects on the mixer page, in much the same way as conventional effects are used via the aux send/return loop on a hardware mixer. The mixer also provides parametric and shelving EQ, and the range of effects includes reverbs, delays, chorus, flange, overdrive and distortion. As if this weren't enough, there's also a flexible arpeggiator that can be 'played' live or programmed via the on‑screen keyboard, and this features a number of latch and assignment modes. 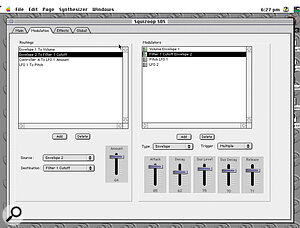 Sadly, routings are constructed using menus rather than a graphical interface (maybe in the next revision...?).

The software comes as a suite of modules that present the user with different windows depending on the task in hand. The four main sections are the Editor, MIDI Processor, on‑screen Keyboard and the Mixer, with further windows for checking the processor usage and the OMS/FreeMIDI routing. Arpeggiator settings are made in the MIDI Processor page, which also handles splits and layers. Sounds are modified or created and saved in the Editor, which itself is subdivided into Main, Modulation, Effects and Global pages. The Global page is where you set up things like part transpose, pan, portamento mode and rate, volume and trigger mode.

When creating or modifying a patch, the Main Edit page allows you to switch on or off the three oscillators and two filters as well as to adjust their parameters via on‑screen sliders. You can modify the sounds in real time as a sequence is playing, but even on a G3 machine, I noticed the mouse and slider control got rather jittery as the processor struggled to keep both the synth engine and the user interface happy. As the various synth modules are configured, a block diagram is created in the bottom right hand corner of the Main Edit page with all the patch cords drawn in, but the really frustrating thing is that you can't add a patch lead by simply drawing it in yourself. Instead you have to move to the Modulation page, then scroll through a menu to select both source and destination. The only exception is the basic oscillator‑to‑filter patching, which can be done via check boxes on the Main page. You also have to use the Modulation page to adjust modulation amounts and to set the filter or level envelope. This can be annoying when you're trying to set up a filter, as you're forever hopping backwards and forwards between the filter controls on the Main page and its envelope controls on the Modulation page. As you can see from the screen shot on page 200, the Main page provides a lot of control over the oscillators and filters.

Retro AS1 is a very sophisticated synthesis package and in a review of this length, it's impossible to do more than merely mention some of the features, such as the arpeggiator and the mixer. However, as a picture is worth a thousand words, please see a thousand words on the mixer in the screenshot above!

After I'd played with the sound editing system for a while, it soon became apparent that Retro AS1 is an extremely powerful synth capable of producing the kind of sounds you might expect from a modular analogue system, and it certainly goes a lot further than most compact analogue instruments. However, programming would have been much easier if the designers had adopted a more graphical approach to patching, for example, with the various synth building blocks presented as icons on a palette so they could be dragged into the configuration window, then connected by dragging cables from one block to another, much as in Logic's Environment page. What's more, instead of having to swap pages to get at the the relevant sliders for a block, it would have been better if clicking on the desired block in the configuration window brought up the relevant fader panel automatically.

Sonically, I can't fault Retro AS1 — it's capable of both hard, edgy sounds and sumptuous analogue pads, while the modulation options open up avenues for further exploration of more complex sounds. The filters also sound the part, with the resonant low‑pass being particularly rich and fruity sounding. Some of the supplied presets are excellent, and the beauty of having so many is that even if you're not an analogue synthesis expert, you can usually pick a patch that you like and then fine‑tune it fairly quickly.

The Mixer page is extremely useful as it allows you to balance the various parts and add effects. Admittedly the effects aren't anything out of the ordinary, but they are adequate to give the dry synthetic sounds the width and life they need to sit comfortably in a mix.

Not only is Retro AS1 an extremely powerful and flexible synthesizer, it is also a useful educational tool that allows the user to explore the kind of sound creation techniques normally restricted to patch‑cord modular systems. The sound quality is rather better than that of many original analogue synths, which often tended to be noisy, and the range of timbres on offer is huge. Whether you're into soft pads or hard sync sounds, they're all in here somewhere.

The user interface is perfectly manageable, but could nevertheless be improved considerably by making it more graphical, especially the routing and modulation side of things. I also have to admit that I found OMS to be an unwelcome complication that I'd much rather live without. What's more, when you come to wipe it from your machine, it seems to hang in there with all the tenacity of a starving Tasmanian Devil that's just sunk its teeth into a steak sandwich! I'm not sure I've got rid of all of it, even now. I'll be happier when Logic drivers become available, though I don't know which other sequencer manufacturers plan to write dedicated Retro AS1 drivers.

In the final analysis, even though it could be improved in some areas, Retro AS1 is a powerful and sensibly priced multitimbral synthesis engine that could benefit any composer working with one of the new models of Macintosh. Even if you only ever use the presets, it's worth the money, and because it includes a comprehensive mixing environment and effects section, the stereo output isn't a limitation. Definitely worth considering if you have a fast Mac with processor power to spare.

A great‑sounding multitimbral synth, but only if you own a fast Mac.