We find out if the most competitively priced Allen & Heath mixer yet lives up to its heritage. 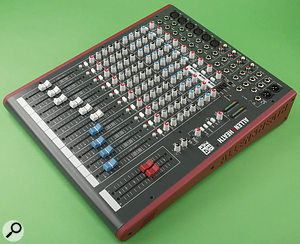 Photo: Mike CameronThe Allen & Heath ZED14 USB Mixer is new and, until recently, has been something of a secret. In fact, at the time of writing, there isn't even a mention of it on the Allen & Heath web site. Though Allen & Heath have a good pedigree in the manufacture of mixing consoles, the ZED14 is their first small mixer to come at a truly budget price, so I was keen to find out how it compared with their longer-established designs.

Designed in the UK, but built in China to keep the cost down, the ZED14 is a compact mixer that uses the same quality of circuitry and components as the company's larger live-sound consoles, and is intended for both live-sound applications and basic recording work.

Six mono mic/line channels, and a further four stereo, line-only channels, provide the 14 main inputs that give the ZED14 the second part of its name. But there are actually more inputs than this: two stereo inputs on phonos to accommodate a two-track return and a general stereo effects return, and a further stereo input, fed from the onboard two-in, two-out USB audio interface.

The intention seems to be to provide a good mixer and interface with which you can get up and running quickly. Being a class-compliant device, the USB interface can be used with any modern Mac or PC computer, without any need to install drivers. The standard USB drivers worked fine for me, but it should also be possible to use third-party offerings such as the Asio4All drivers if you prefer. There's a copy of Cakewalk's Sonar LE DAW software included, which will get PC users off to a flying start (Mac users don't have this option, but can use Garage Band, which now comes free with all new Macs).

Most small mixers with inbuilt USB interfaces simply send the main mix out over the USB link (which in this case is USB 1.1, but is USB 2-compatible), but here, you get the choice of feeding the main output pre- or post-fader, or sourcing from Aux 1/2 or Aux 3/4. This means that (latency permitting) you are free, should you wish, to send signals via the USB link to computer-based effects, such as reverb or delay, for use with the mixer's effects sends and returns.

The interface itself is fixed at 16-bit, and operates at sample rates of 32kHz, 44.1kHz and 48kHz, as determined by the host software and driver settings. A record output is provided on phonos, which is fed pre- the master fader but post- the master insert points. Clearly, this level of digital interfacing isn't nearly comprehensive enough for multitrack recording, unless of course you only lay down one or two tracks at a time. However, it does provide a very practical way to record live gigs 'off the board', and also provides a means to route a computer into the mixer for monitoring, outboard software effects processing or for using software instruments in live performance. 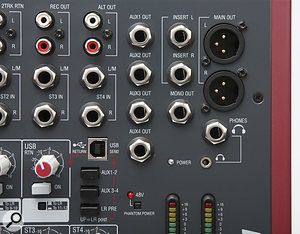 All the connectivity for the ZED14 is on the top, which makes for easy access. Usefully, and unusually, you get both mini- and three-quarter-inch headphone outputs.Photo: Mike CameronBy comparison with many other small mixers, the ZED14 takes an old-school approach to engineering, with each channel built on its own, vertically mounted circuit board, and with each rotary control fixed to the front panel, rather than allowing all the stress to be placed on the circuit board. This mode of assembly makes servicing far easier in the event of a component failure, and it reduces the risk of mechanical damage during normal use and transport.

The main panel is made from a single piece of steel, which is shaped to provide a comfortably curved front rest beneath the faders, and also forms the top control surface and rear panel. A second panel covers the base of the unit, and the end-cheeks are made from tough, coloured plastic, giving the whole thing a very traditional and reassuring look. The panel screening is generally clear, with plenty of space between controls, though there's no BNC lamp socket to help you out during those dark gigs. Power comes from an IEC mains inlet (which, thankfully, means no annoying power adaptors) and, other than a fuse and a power switch, there's nothing else on the rear panel, as all the audio connectors are in clear view at the top of the control panel. There's little to criticise here, though I would prefer to see the USB socket placed out of the way on the rear panel.

The mic amp uses two cascaded gain stages, the first of which is bypassed when a line input is being used. This configuration generally produces better noise performance than designs that pad down the input and then amplify it (along with the noise) back up again — as many other mixers still do. Up to 69dB of mic gain is available, and all the mic channels feature insert points that allow processors to be placed after the mic preamp stage where necessary.

Each mic channel also features a three-band EQ, with a mid-frequency that can be swept from 120Hz to 4kHz, which gives it scope to tackle those awkward lower-mid frequencies that many other three-band EQs frustratingly fail to cover. The two Baxandall-style shelving controls operate at 80Hz and 12kHz respectively, and there's also a switchable 100Hz low-cut filter. The stereo channels have the same upper and lower shelving control but no mid EQ. There's no EQ bypass, alhough there is a centre detent on all the EQ gain controls to make it easy to keep things relatively neutral.

All channels feature a pair of pre-fade sends and a further pair of post-fade sends, for use with foldback monitoring and effects loops. On the stereo channels, there's an extra, flush-mount button that allows the two pre-fade sends to be set up instead as a single stereo pair. The three stereo returns (Stereo, 2Tk and USB) each have level controls, and additional, flush-mount routing buttons that can be changed using a pen or similar item. This means that, as well as feeding the main stereo mix as usual (button up), they can feed into the three stereo channels directly below them, where they are summed with any signals already passing through those channels, thus giving them access to EQ and sends. 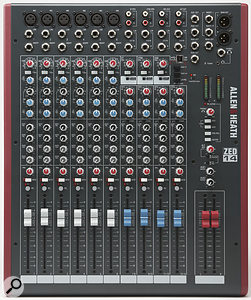 A channel strip from the ZED14, which includes a very musical three-band EQ. The mid-frequency control covers a wider range than on most similar mixers, which gives you plenty of control over those often-problematic low-mids.Photo: Mike CameronThe USB socket is above stereo channel 11/12, along with the three routing buttons that allow its output source to be selected as the pre- or post-fader stereo mix, the Aux 1/2 output or the Aux 3/4 outputs. The top routing button takes priority if more than one is pressed, and with all buttons up, the source is the post-fader main mix. As with the phono returns, the USB feed into the mixer is sent to the main stereo mix, or to the stereo channel directly below, according to the setting of the routing button.

All channels have mute buttons with status LEDs, PFL buttons with LEDs (which also act as peak-level warning indicators) and good-quality long-throw faders. A further flush-mounted button in the master section is used to apply global phantom power to all the mic inputs, and this has the usual status LED to let you know whether phantom power is active. A small, blue LED shows that the mixer is powered up.

In the master section, all four Aux outputs are on impedance-balanced, quarter-inch TRS jacks. The main output is on balanced XLRs, with adjacent pre-fader insert jacks following the usual TRS send/return protocol. A pair of 12-LED bar-graphs look after the metering, with a 'PFL active' LED directly below the routing buttons that are used to select the headphone source as Aux 1, Aux 2 (both down for stereo), 2Trk Return or USB Return. When all the routing buttons are up, the headphones monitor the post-fader main output. Unusually, the quarter-inch phones outlet is doubled up by a 3.5mm mini-jack, as used for ear buds and consumer headphones — which is a nice touch!

In addition to the main outputs, there's also an Alt Out (on phonos), that has its own level control, and may be sourced from the main stereo mix (pre- or post-fade) or from the stereo monitor mix, comprising Aux 1 and 2. Personally, I also like main outputs to be available on quarter-inch jacks — for the sake of flexibility — but there seemingly wasn't room to do this. Routing is by means of two switches that are located flush with the panel, which means you have to keep a pen or toothpick handy to change their settings. Directly above the two main faders are two master level controls for the Aux 1 and Aux 2 sends, which puts them close at hand if you need to adjust the stage monitor mix during a live performance.

As an analogue mixer, the ZED14 behaves as you'd expect a well-designed small mixer to behave, with minimal mic amp noise unless you push the gain right into the top quarter of its travel — and even then it's unlikely to be audible if you're close-miking something. Allen & Heath have a reputation for producing very musical-sounding equaliser sections, and this one works extremely well, given that it's a three-band affair with a sweeping mid. As I mentioned earlier, it has the range to address all those nuisance lower-mid boxy resonances, and it sounds assertive and clean. The high and low shelving sections provide the necessary tools to brighten up or warm up a track but, like all EQ, you should use it sparingly for the best results.

Having to find something to poke at the switches can be a chore, as you can't even turn on the phantom power without a matchstick, a pen or something similar. However, to be fair, you have to balance that against the benefits of not being able to switch anything important by accident when you're mixing. Though you don't get the same headroom as on a big studio console, there's more than enough leeway for normal work, and the overall audio performance compares well with mixers costing rather more.

As for the USB side of things, everything worked with my Mac G5 as it should, without any need to install additional drivers, but I did detect a small amount of digital background noise in the headphones from that source. This almost certainly doesn't get recorded, but it is a minor irritation when monitoring. The audio quality is pretty much what you'd expect from a budget USB soundcard, and was noticeably less transparent than the same signal played through my MOTU interface. However, for capturing a gig straight off the desk, or for basic demo recording, it works well enough.

Though the USB interfacing could be improved, the mixer itself is very well specified for its price, and having long-throw faders on such a small desk is a real luxury. As always there are compromises necessary to reach the selling price, such as the lack of EQ bypass switches, but on the whole, the ZED14 looks and behaves like a much more expensive mixer than it actually is.

There are now pleanty of small mixers with integrated USB or Firewire interfaces. If you are considering the ZED14 you could also look at models by Alesis, Phonic and M-Audio — some of which provide additional I/O for your computer — or you could, alternatively, opt for a small mixer with a separate USB interface, such as the packages offered by Behringer.

The ZED14 is surprisingly well-specified, given its price, and although the somewhat perfunctory USB audio interface lets it down a little, it works well for demos and live recording.