With so many software amp simulators to choose from, how do you know which one is right for you? Here's our selection of current options, with links to the SOS review where available. 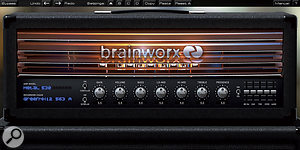 Brainworx's BX Rockrack Pro favours quality over quantity, offering just a handful of simulations that Brainworx have developed in conjunction with a range of big-name rock and metal producers. As such, it favours heavier guitar styles, but there are models available for other genres too. You can also use the recording-chain side of the models (mics, preamps, processors and so on) independently, and apply them to other plug-ins, or even your own real guitar amps.

Virtual Guitar Amp II's 18 preamp and 18 cabinet models cover a wide range of musical styles, and though it doesn't have the variety of effects that some other amp-sim plug-ins do, its included tremolo, chorus, delay and reverb sound very authentic. In our review, we praised it for its ability to make guitar sounds that sit very well in a mix. 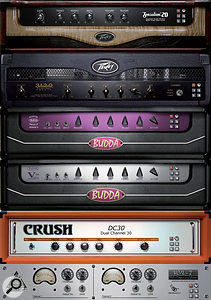 Peavey's ReValver offers arguably the most detailed editing options of any software amp simulator. As you'd expect, you can mix and match different amps, speaker cabinets and effects; but if you want too, you can alter the internal design of the amps themselves, even to the extent of swapping out individual electrical components such as capacitors and resistors! 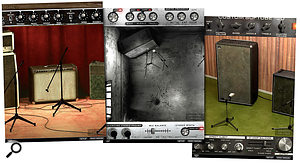 The Amp Room suite comes in three different flavours: Bass Amp Room ($159), Metal Amp Room ($159) and Vintage Amp Room ($219). The photo-realistic UIs show pictures of the amp models you're using, and let you move virtual mics around relative to the amps to get the sound you're after. The Amp Room plug-ins have also recently been ported to the UAD2 DSP platform. 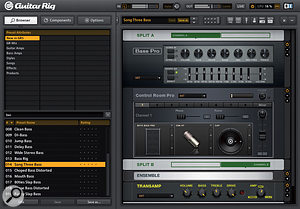 Guitar Rig Pro features a wealth of emulations, with 17 amps, 27 cabinets and 54 effects to choose from. The Control Room section also includes models of mics and their positions relative to the modelled speaker, and NI also make a dedicated controller pedalboard called the Rig Kontrol. 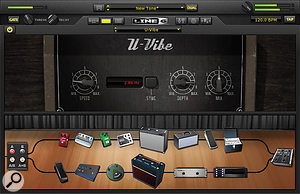 From Line 6, the pioneers of guitar-amp modelling, comes Pod Farm, which brings the sound of the company's ubiquitous hardware processors to the software world. As well as having over 250 amp and cabinet models, Pod Farm also includes an extensive selection of effects, with free routing between its many stomp-box models. 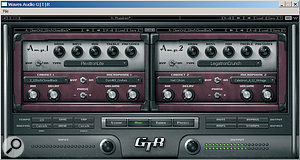 Waves have brought their usual high plug-in coding standard to the software amp-sim world, offering 32 amps, 29 cabinets and a choice of 26 stompbox effects. A dedicated foot controller called the GTR Ground is also available, and features 11 footswitches and two expression pedals for control over GTR3's amp and effect parameters. 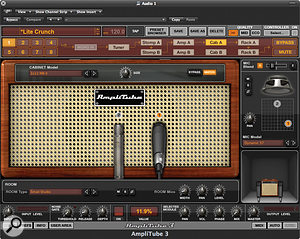 IK pride themselves on offering a vast array of models suitable for all genres of music. Not only are a great number of classic amps and effects available, but IK's range also includes versions based on the rigs of famous guitarists, including Slash and Jimi Hendrix. An iOS version of Amplitube is also available, as are hardware accessories and interfaces for iPods, iPhones, iPads and computers. 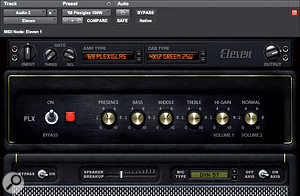 Avid's Eleven gravitates towards emulating classic amps of yesteryear, including coveted models by Vox and Fender from the '60s, though some more modern, high-gain designs are included too. Specific mic models from the likes of Shure, AKG and Royer are also provided, including on-axis and off-axis mic placements. Eleven requires a Pro Tools system to run, and comes in RTAS, AudioSuite, TDM and AAX formats. 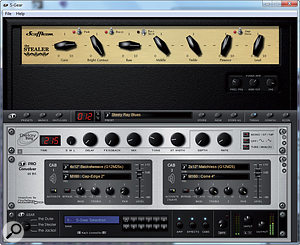 Rather than slavishly modelling specific amplifiers, Scuffham S-Gear provides models loosely based on hardware designs, but with the flexibility to create sounds not available from any existing amp. In our review, we praised it for not only sounding good, but for 'feeling' like a real amp too, thanks to its ability to capture phenomena like rectifier sag and speaker loading. 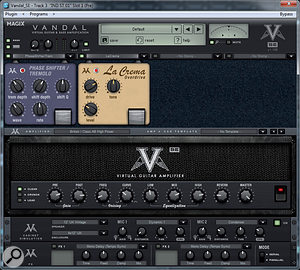 Unusually, Magix's Vandal has only two amp models: one for guitar, and one for bass. However, these models can be tweaked in great detail to achieve pretty much any sound you need, and as such, Vandal is a very flexible amp sim. Since it works with physical modelling, rather than using any convolution processing, it's also CPU-light, yet it sounds exremely good and is very responsive to playing dynamics. 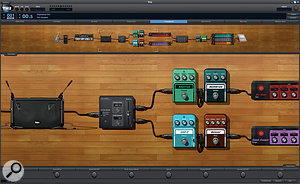 With 45 amp and 29 cabinet models on offer, TH2 certainly looks versatile. In addition to the 'inspired by' models that most amp sims include, Overloud's suite comes with licensed models from Randall, Brunetti and THD, which the company claim "cannot be distinguished from the real ones”. What's more, TH2's reverbs are derived from Overloud's highly regarded Breverb and SpringAge plug-ins.

Software amp sims have come on leaps and bounds in recent years. Can your computer fulfil the next stage of your tonequest? 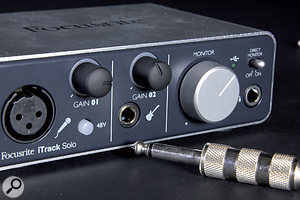 If your interface has an instrument jack input, like this one, then a bit of software could be all you need to get the perfect guitar tone from your computer.

It's not just software versions of studio outboard that have proliferated in recent years: there are now more plug-in emulations of guitar amplifiers and speaker cabinets on the market than you can shake a stick at! The quality of many of them is very good indeed, and the prospect of getting your computer to take the place of an amp stack and pedalboard, at a fraction of the price (and size!) of equivalent hardware, is indubitably enticing. To get the best out of such software, though, there are a few things you need to consider...

Firstly, you'll need something to plug your guitar into. Many audio interfaces already have such a facility: a quarter-inch jack socket that presents a high input impedance (sometimes known as 'Hi-Z'). If you have such an interface, you're pretty much good to go! Some interfaces, however, have only mic or line inputs, in which case you'll need either a DI box (for mic inputs) or a guitar preamp (for line inputs) before you can start jamming.

If you have no interface at all, the simplest option is probably to go for one of the many USB devices available. There are countless models around that allow you to plug in a guitar, and many that will also accept microphone signals, which would be ideal for recording basic demos. And if you only want to use your computer as a software guitar rig, things get even easier: for under £20$20, you can get a guitar-to-USB cable — essentially a compact audio interface built into a cable — which will have you up and running in no time.

For more advice on choosing an audio interface, you can read our in-article feature on the matter at /sos/sep08/articles/audiointerfaces.htm.

Most readers will be familiar with the problem of latency — the delay you hear when monitoring a signal as you're record it. When recording vocals, people often get around this using 'direct monitoring', whereby the unprocessed input signal is tapped off before it goes into the computer, for latency-free listening. For guitarists, however, it's not quite so simple. The sound has to go into the computer, be processed via the software, and pass back out again before you can hear the sound of your guitar as if it were running through an amp. The reason direct monitoring is of little use to guitarists is that listening to a direct guitar signal just isn't the same as playing through an amp, as you don't get any feel for the sound of the guitar-and-amp combination as you're playing it (try shredding along to a heavy metal track without distortion, or playing U2 licks without a delay pedal!), and the performance often suffers as a result.

The first step to mitigating latency is to set your software's buffer size as low as you can while tracking, without introducing unwanted clicks, pops and the like. This places a greater load on your computer's CPU, but will reduce the latency, and in many cases this is the only step you'll have to take.

If the delay between what you play and what you hear is still unacceptably long, though, there are other ways to get around the issue. For example, you could use a DI box with a 'Thru' output to split the guitar signal, with one side going to a small practice amp for monitoring, and the other going to your audio interface's mic input for recording purposes. You might not get to hear the actual sound you'll eventually settle on, but it's much better than listening to a DI'd signal, and you can always tweak your amp-sim's settings after you've recorded it a part.

As with soft-synths, guitar-amp software often comes with an arsenal of complex, effects-laden preset sounds based on famous guitar tones. While these might catch your attention while you're searching for the sound you want, they can end up sounding awful when you're trying to use the guitar sound in a mix! It's a good idea to peel back those effects and optimise the amp and speaker emulation settings first, before relying on complex effects chains to get the tone you're after.