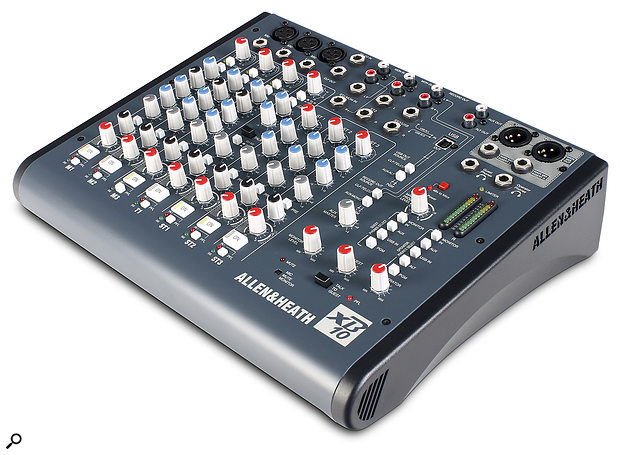 More and more of us are podcasting or Internet broadcasting, and this affordable dedicated mixer can make these tasks easier.

Of the countless small-format mixers now available, very few are equipped with the kind of facilities needed by small community, hospital and university radio organisations, and for podcasting or live Internet streaming applications. I'm talking about integrated remote start and stop facilities to control CD players and the like; studio speaker muting and on-air light switching when the mic channels are active; and mix-minus outputs to prevent howl-rounds during phone-ins and outside broadcasts. With increasing numbers of people doing their own radio-show-style podcasts, there's also a growing demand for these sorts of facilities in home studio setups.

This niche market has been addressed by Allen & Heath, first with their XB14 console launched a couple of years ago, and now with the cute little XB10. Both are built to take years of heavy use, with individual channel circuit cards suspended vertically within a robust steel chassis, and all the rotary control knobs fixed to the metalwork via metal shaft nuts.

Despite its size, the XB10 has everything a small radio operation needs. The source requirements of most modest broadcast situations are easily accommodated via three mic/line inputs (featuring Mixwizard preamps and global phantom power on-off), a dedicated 'telco' (telephone contributor) channel, and three stereo line inputs. An integrated USB interface (16-bit stereo in both directions at base sample rates, for Mac or PC) is also included, making it very easy to play and record using a local computer. It also allows Skype (or other VoIP application) to be used for 'phone-ins', which is significant, as an analogue telephone line interface (a TCBU or 'hybrid') can cost almost as much as the XB10!

The XB10 can be configured for presenter self-operation, or for separate control room/studio setups, with discrete talkback facilities for the presenter and guest headphones, as well as for the telco channel output, for talking with a remote contributor. Comprehensive switching and signalling facilities are built in, so that an external 'on-air' light can be illuminated (and the studio speakers muted) automatically when any of the mic channels are switched on, for example. You can also automatically start and stop CD players and other music sources by pressing the stereo Channel On buttons, and there are even independent external 'cough-key' mic-muting facilities! These control signals are brought out to a 25-pin D-Sub socket, and the manual provides all the necessary technical information on their use.

The console has two mix buses: 'Main' and 'Alt'. If a channel is switched on, it feeds the Main bus, and when off it feeds the Alt bus, with the former providing the transmission output and the latter an off-air recording bus. A mono auxiliary bus can also be accessed from each channel. There are no faders — only rotary level controls — but switching channels on and off as required with the big illuminated channel On buttons is entirely acceptable in the kind of broadcast application this desk is designed for.

The mic/line channels have plenty of gain and are equipped with a high-pass filter and three-band channel EQ (fixed high and low shelves plus a sweep mid). A preset compressor can also be switched in, if required, and the usual pre/post Aux send, Pan, PFL and signal present/clip LEDs are all provided. The stereo line inputs just have high-shelf and low-shelf equalisation, but otherwise are similarly equipped, and the third stereo channel can take its input directly from the USB interface, if required.

The Telco channel sets this console apart from typical compact mixers, mainly because it is equipped with a clean-feed output. 'Clean-feed' is a quaint British term, which other territories know better as 'mix-minus' or 'N-1'. Essentially, this output carries the full main mix minus the telco source itself, so that howl-rounds can't occur if the output signal crosstalks electrically or acoustically back into the input signal (something that's endemic in analogue phone lines!). The clean-feed source can be switched between the main mix bus and aux bus, to allow off-air recording of a remote contributor while other material is still being broadcast live through the desk.

A pair of XLRs provides the main programme outputs, with a switchable fixed peak limiter, if required. Independent monitor source switching and separate volume controls are provided for the presenter and guest headphones, with an LED bar-graph meter following the presenter's source selection, and showing any PFL'd channel signals.

There are two output recording options — a dedicated stereo unbalanced analogue record output, and the integrated USB interface. Push-buttons determine what signals feed these destinations, with the stereo Main mix bus being the default for both. The alternatives are both dual mono, providing the telco input (L) and clean-feed signal (R), or the Aux (L) and Alt/mono (R) buses.

I am very impressed with the Allen & Heath XB10. It's well built and thoughtfully designed to meet the requirements of basic broadcasting in a very simple but effective package. Sound quality is up to normal A&H standards, with generous headroom margins and low noise, distortion and crosstalk figures. This is an ingenious product at a very attractive price.

A&H's own XB14 console is similar, but offers more of everything, and real faders, for a modest price hike. Several other manufacturers produce broadcast-specific consoles, and the Sonifex S2, AEQ Bravo and Soundcraft RM100 are possible contenders.

The XB10 is a clever and cost-effective broadcast-style compact console, complete with all the essential control facilities, including a useful telco channel and USB interface. Recommended.