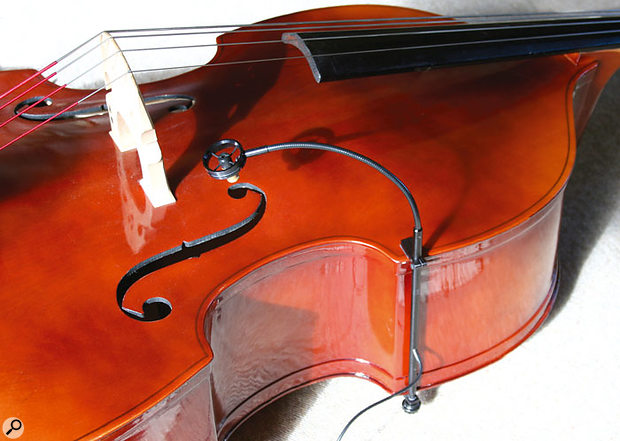 Amplifying an acoustic bass on stage is far from straightforward — indeed, the difficulties involved have been known to make players swap to an electric. Could this AMT mic/preamp system be what upright bassists have been waiting for?

From a live-sound point of view, amplifying electric bass is usually one of the easiest tasks. In smaller venues, the backline is often powerful enough on its own, and even when the bass is DI'd or miked, feedback and clarity are rarely a problem. With acoustic basses, things are by no means so straightforward: the backline amp (if there is one) is often there as a personal monitor for the bass player and doesn't contribute much to the overall live balance, and it's a big problem trying to obtain enough gain on stage without losing the original character of the instrument.

Most bass players of the upright persuasion will have spent much time and money on their instrument, its strings and its setup. Having achieved a great tone and balance, the last thing we need is for the act of amplifying the bass to destroy most of these qualities. So if we want to retain as much as possible of the original acoustic tone of the bass, a good–quality microphone is generally the answer, and that's where the real problems begin in a live situation.

In a recording situation, you can ask the bass player to keep fairly still, and experiment with microphone placement to get the exact sound you want. In a live environment there are serious practical issues that prevent this. For example, the player will probably want to move around on stage, and the mic will have to be close to the instrument to prevent the rest of the band being picked up — and, in general, the closer the mic position, the more adverse is the effect of moving the bass even by a very small amount. Add to these woes the usual lack of setting up time, restricted stage space and so on...

Many players have developed their own ways of miking a bass, including the old wedge of foam rubber or 'cats cradle' of rubber bands in the bridge arch, but they almost always represent a compromise. Here, from specialist microphone designers Applied Microphone Technology (AMT), is a solution that has found favour with top performers: the S25B and SP25B Acoustic Bass Microphone System. Part of a range of specialist acoustic instrument mics catering for everything from harmonica, woodwind and brass to strings, piano and even vibraphone, the AMT SP25B comes in a strong plastic case and consists of the mic assembly on its mounting clamp and a metal–cased preamp. Also supplied is a hex key, for initial adjustment of the mounting clamp, and a brief user guide.

The microphone capsule is a very low–mass, tight–cardioid electret condenser design specific to this bass system, and sits within a diminutive shockmount assembly of the metal 'spider ring' type. On the back of the mic itself is a red LED that indicates the presence of battery or phantom power. The shockmount is permanently attached to a slim metal gooseneck section, which is, in turn, mounted on a solid metal clamping bar. The whole thing is held in place on the instrument by two small metal clamp plates, that slide along the bar and clamp on the front and back of the bass; the instrument surface is protected by soft suede-leather pads that cover the inside faces of the clamp plates. 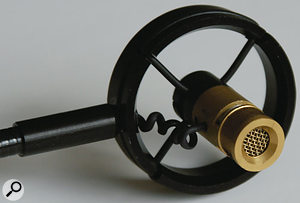 The capsule of the AMT mic, suspended in its metal shockmount.Photo: Mike Crofts

The whole assembly is finished in black, and is unobtrusive and very neatly designed. Once mounted, it feels very solid and isn't in any danger of shifting position or working loose. The gooseneck adjustment is positive and tight, and there is virtually no 'spring–back' when you're making fine adjustments to the mic position. A mic cable is permanently fixed and exits part of the way along the clamping bar, the cable exit being angled back to the rear of the bass and protected by a semi–flexible plastic sleeve. This lightweight cable seems fit for the purpose, but if it were damaged it would be a tricky repair. It terminates in a special four–pole plastic plug (with quick–fit locking ring) that's a special sealed, waterproof design used mainly in marine communications equipment, and is very securely clamped to the cable.

I like the fact that the plastic plug is very light, as this is the piece which, when disconnected, will hang free, so it won't inflict any damage if it bumps against the body of the instrument. The unique nature of the plug could be a potential issue, as it's not the sort of thing you would want to be repairing at a gig, but on the plus side it does look very well put together and, with care, shouldn't cause any problems. Spare plugs are available from the UK distributors, and I think I would be tempted to buy one anyway, just in case.

The AMT preamp is available in two versions: the basic S25B and the SP25B 'pro version' reviewed here, which has an additional transformer–isolated XLR output and a line–driver module. The unit is housed in an enormously strong aluminium–sleeved box that looks as if you could stand one or more elephants on it; the innards slide out (after you undo a single screw underneath) to enable battery changes and allow access to the internal line–level preset adjustment. On one end is a single standard jack input socket and a level control, which controls the signal level from the line–driver output. On the other end are three outputs: a mono jack line–driver output for connecting to a local amplifier on stage, and the aforementioned XLR outputs, which provide a balanced PA or recording feed. On this SP25B model, the red XLR is the isolated (ground lift) output and the black one is 'normal'. This panel also accommodates an input connector for an external power supply.

The user guide strongly recommends the use of an internal battery rather than either an external or phantom supply, and in fact the preamp is not fully functional unless a battery is present. The isolation transformer stage and the line driver (jack output to your amp) work only on battery (or external supply) power. This is, in part, a precaution against problems which could arise if the unit is connected to a 'weak' phantom supply. The maker's literature suggests that a battery should last around 60 hours, which is quite a few gigs or sessions, and the unit only powers up if the mic plug is connected. 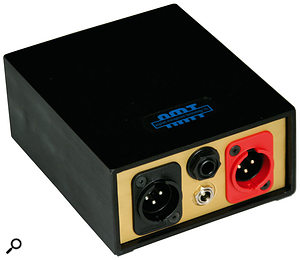 To gain access to the battery, you have to slide the preamp chassis from the outer sleeve by removing a single countersunk screw on the base. (It's a screwdriver job that can't be done with a fingernail or small coin.) I would feel happier if there were two screws holding the sleeve in place, because if you drop this one down the side of the stage there's nothing else holding the unit together for the rest of your gig. The 9V battery holder is the best I've ever seen, and holds the battery with a grip like a fully–grown crocodile. In fact, the overall build quality looks top class. Indeed, I assume the unit is hand–built, as it has a lovely old–fashioned over–engineered feel to it.

The first advantage of this system is that because the mic is mounted on the body of the bass it can't move relative to the instrument, so it will remain in exactly the same position no matter what the player does. Secondly, the mass of the capsule assembly is so low that it won't sag on the gooseneck even if the bass is moved quite violently — you could probably make it lose position, but only by doing something extreme like dropping the bass from a few inches on to a hard floor, which I have no intention of trying on my beloved instrument!

Mounting the mic assembly couldn't be easier — having made the coarse adjustment to the front clamp, using the supplied hex wrench, you simply offer up the mount to the bass body and tighten the rear clamp using the adjustment knob. There's no damage to the body of the bass, as the clamps are lined with the suede pads I mentioned earlier, and on my instrument the whole mounting sat nicely below the shoulder of the bass, allowing the bass to be laid on its left side (where right–handed players would tend to lay it) without interfering with the mic mounting in any way. However, you can, of course, mount it anywhere on the edge of the body that works best for you. The straight cable can be run around behind the instrument using the rear clamp–knob as a cable guide, which keeps it hidden and helps you avoid treading on it. I would always do this, as it also protects the cable entry point from unnecessary flexing.

In use, the SP25B is utterly straightforward: just plug the preamp line–driver output into your stage amp and away you go. There are no 'tone controls' on the unit (you do that bit with your amp), but experimenting with the mic position really brings home just how wide a variation in sound can be achieved by changing where the mic is placed and the distance from the body. I found that having the mic pointing directly into the f–hole from about 4cms (just far away enough to lose the major resonances) gave me a really deep, tubby sound that was ideal for small combo stuff, but for arco work (pit work, for example) it needed to be moved away another centimetre or so, to smooth out the response across the strings

I spent a while fiddling about with the SP25B and recorded different playing styles over a few hours — mainly because it's not easy to be objective about your sound while you're actually playing — and I was extremely happy with the results. What you can't do with this mic is just strap it on and expect everything to sound just like your best fantasy bass immediately. The final results will depend very much on how you use it, and to get the best out of your investment you need to follow the empirical route and try out lots of different placements and settings until it works for you. It's always a good idea to ask other band members or listeners what they think and use the poll results as a starting point, then adjust to taste as you go. However, the sound quality and capability of this system is excellent. I might even sell my bass to get one...

If you're in the market for a microphone-based bass solution, once you get to know and love this AMT system it should cover all possible 'amplify your bass' situations. It's not cheap, but it absolutely does the business.