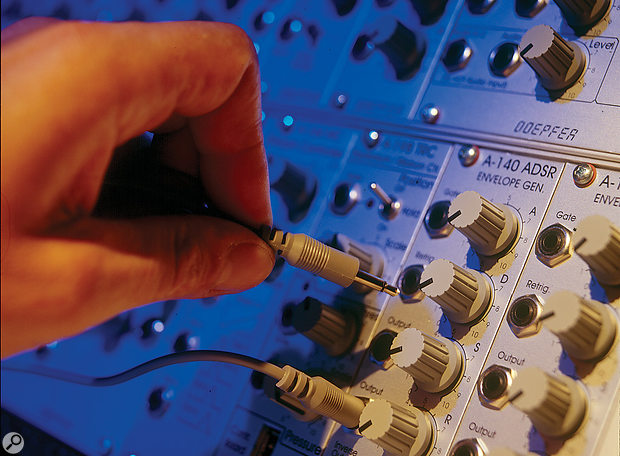 A few years ago, if someone had said you could buy an all-analogue, three-oscillator synth with an assignable LFO and envelope generator, a resonant filter, MIDI input, a 16-step sequencer and a built-in delay for only £119/$149, you'd have laughed in their face - but thanks to modern manufacturing techniques, this dream is now a reality!

Synthesists have been asking manufacturers to build new analogue instruments for years — and now they’ve finally responded. But what took them so long?

The analogue synth market has undergone an undeniable resurgence in recent years. After a long period (namely the ‘80s) in which it seemed that they had gone the way of the dodo, the last few years have seen synth giants and boutique companies alike release perhaps the widest range of new analogue synths since their heyday in the ‘70s. What’s odd, however, is that this analogue revival has taken place just as digital software and hardware synthesis seems to have reached its peak. Computer emulations of analogue synth architecture are frequently indiscernible from the real thing, while those instruments (both real and virtual) that seek to use digital technology to push the boundaries of traditional synthesis often do so with great success: sample John Bowen’s Solaris and the Korg Kronos, to name but two.

So why the enduring popularity of this ostensibly outmoded technology? Well, as with analogue outboard gear, it’s the imperfections that people are drawn to. Subtle distortions, nonlinear envelopes and idiosyncratic oscillators are all part of the charm. Even tuning instabilities can help contribute to a thicker, more organic sound, by creating a kind of chorus effect when multiple oscillators are layered. All these things add up to analogue synths feeling more like ‘real’ instruments than their digital counterparts, which are often accused of sounding ‘sterile’ and ‘lifeless’.

Finally, there’s the user interface. Most analogue synths (with a few exceptions) have a one-knob-per-function mode of operation, which makes editing patches and performing real-time adjustments a simple and immediate affair. By contrast, digital synths tend to economise on knobs and sliders, often requiring shift keys to access parameters, or worse, hiding functions within multi-layer menus.

So that’s why they’re so in demand, but it doesn’t wholly explain the relatively sudden influx of analogue synths. In a nutshell, you can probably attribute it to surface-mount technology (SMT). Synths from a few decades ago (including all those we now consider classics) were assembled using what’s known as through-hole technology: the electrical components were soldered, usually by hand, such that their ‘legs’ poked through the circuit board. With surface-mounted technology, components can be made significantly smaller and, importantly, their installation on circuit boards can be automated. All this adds up to synths that can be built much quicker and cheaper than ever before — as exemplified by Korg’s hugely popular Monotron and Monotribe synths (which, even four years after their release, remain the most affordable way of getting into analogue synthesis).

Although this analogue renaissance is a fairly recent phenomenon, the demand for such instruments has been around for years: witness the market for secondhand synths, many of which started life in the ‘70s as budget instruments and have now achieved almost cult status, commanding prices several times higher than what they cost new (as a simple eBay search for Roland SH101s and original Korg MS20s will reveal).

Indeed, the paucity of new analogue synths over the last 15 years or so has skewed the secondhand market so much that even synths that weren’t particularly desirable — or even very good at all — at the time of their release can come with premium price tags purely by virtue of being analogue. Thankfully, though, you can now buy new synths that not only out-perform their similarly priced secondhand cousins, but that come with all the extra features we’ve come to expect from modern studio gear: USB connectivity, software editing, and even preset storage and recall. Has there ever been a better time to invest in an analogue synth?

The market for cheap analogue synths is booming: we round up some of the best wallet-friendly purchases available today. 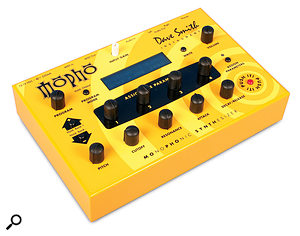 Although also an analogue monosynth, Dave Smith Instruments’ Mopho is a very different beast altogether. It lacks a keyboard for starters, and its user interface is largely menu-driven, so it has inherently less immediacy than a traditional one-knob-per-function synthesizer. The flip side to all this, though, is that it’s extremely cheap for an analogue synth — especially one with the DSI family sound. Under the hood, it’s also a deceptively powerful beast: four LFOs are present (with an enormous range of 0.03Hz right up into audio frequencies), as are three envelope generators (one for the VCA, one for the filter and one freely assignable), a 16-step sequencer and an extensive modulation matrix.

All these parameters can be accessed via the top panel and its 10 encoders, but there’s also a free SoundEditor software package available, which makes in-depth editing — as well as preset storage and recall — as easy as it is on a soft-synth. As such it could well be ideal for people who value the convenience of computers for music creation, but who still demand analogue sounds. 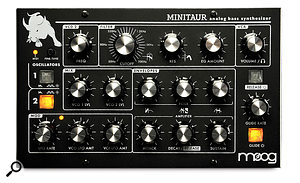 There aren’t many ‘bass synthesizers’ about these days, but one such is the Moog Minitaur, a kind of desktop-format homage to the archetypal bass synth from the same company, the Taurus. While it’s true that you can make bass sounds using pretty much any synthesizer, the Minitaur is truly dedicated to the purpose (it even has an upper note limit). What’s more, its innards are all Moog, from the ‘classic’ 24dB/octave filter design to the dual envelopes that modulate the VCA and filter cut-off.

There’s plenty of hands-on control here, with pretty much every major parameter getting its own knob, although there are a number of significant under-the-hood features too. These include legato and glide, velocity sensitivity and pitch-bend amount. What’s more, all of the front-panel controls (apart from fine-tune), plus all the hidden ones, can be controlled via MIDI CC numbers. There’s even a software editor available that allows you to save and recall presets. 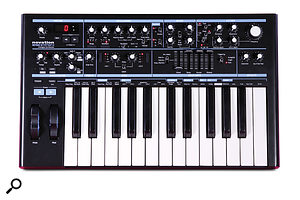 At first glance, the Novation Bass Station 2 looks like a fairly basic instrument, but don’t let its controls fool you: while there may only be one set of oscillator and envelope knobs and sliders, it actually has two of each, as well as two filters and two LFOs. Though its sounds are generated in the traditional analogue way, it is in fact controlled digitally, which makes the control-sharing scheme possible.

While this interface may not be quite as ‘WYSIWYG’ as some more old-school analogue synths, the advantage is that it comes with 64 factory patches, and has space for a further 64 user ones — all of which can be saved and invoked to and from its internal memory. The keyboard generates and responds to aftertouch, and there’s also a 32-step sequencer built in. 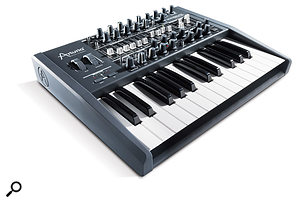 When Arturia first announced their MiniBrute back in 2010, it caused quite a stir — not least because it signalled the French company’s move from soft-synth development to hardware manufacturing, when the trend has been to go in the opposite direction! But it also generated a buzz (pun intended) because it was, at the time, the first new, affordable, analogue, keyboard-equipped monosynth to be released since the days of the legendary Roland SH101.

Resplendent with knobs and sliders, the MiniBrute boasts an oscillator with mixable saw, pulse, triangle and white-noise outputs, plus a sine/square-wave sub-oscillator. Modulation comes courtesy of an extensive LFO section, a separate vibrato and two ADSR envelopes, while for the more adventurous analogue synthesist it can be integrated with any number of modular systems thanks to its complement of CV and gate I/O. 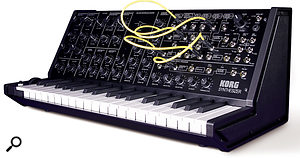 Depending on how you look at it, Korg releasing the MS20 Mini, an almost identical (if slightly smaller) synth to their classic MS20, was either a very brave or a very conservative move. Conservative because people have been asking them to do it for years, and brave because such demands don’t always translate into sales! As it happens, the MS20 Mini has pretty unanimously been considered a resounding success. Functionally, it is identical to the original: the dual oscillators, twin filters and two VCAs are all present (and perform exactly like the original!), as is the extensive patch panel — although its jack sockets are of the 3.5mm type, rather than the quarter-inch sockets of the original, to save space.

As well as offering almost endless modulation and routing options, the MS20 Mini (like the original, of course) can mangle external audio sources, and even features an internal pitch-to-CV converter, allowing you to trigger its sounds using anything from a guitar to a microphone. Augmenting the functionality of the MS20 are USB and MIDI ports, allowing you to trigger the MS20 Mini from a keyboard controller or your DAW.