Making Music On The Move By Hugh Robjohns 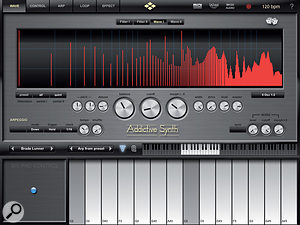 Quickly draw the levels of 128 partials with a finger. In this screenshot the keyboard has been limited to the notes of C Aeolian.

The iPad is shaping up to be a very credible host for all kinds of tasty synthesizers, and one that passed me by, until recently, was Virsyn's Addictive Synth. If you're in the same boat, now's the chance to catch up. 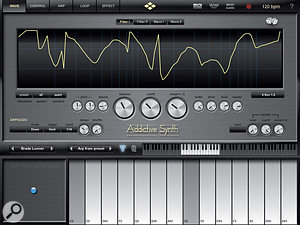 There are two Spectrum filters you can reshape dynamically.Addictive Synth features six wavetable oscillators (in a selection of configurations) and real-time editing of its 128 additive partials and filter structure. With up to eight notes of polyphony, a powerful arpeggiator and extensive modulation, plus effects, it's clear that this is an iPad tour de force. Pretty much every bell and whistle you'd look for is present, from Core MIDI compatibility to audio export and clipboard copy/paste. Topping it all off is a four-track looper which, when combined with the unobtrusive audio recorder, is damn near worth the purchase price by itself!

The synth occupies just five screens: Wave, Control, Arp, Loop and Effect. In the first, you draw the overtone levels of the two available spectra and the shape of their Spectrum Filters. Using a finger to reshape the timbral content on the screen requires absolutely no knowledge of what's happening under the covers, but the results are a welcome departure from conventional synthesis. To lend movement to your patches, you can morph between the two harmonic structures or go to the Control page, where up to four LFOs and four envelopes are on hand to add further animation.

The 32-step arpeggiator is so well‑endowed it's almost a programmable step sequencer. Further performance tools include the X-Y pad and a keyboard that supports velocity response, plus pitch-slides and vibrato. As if that weren't enough, pushing your finger forwards and backwards acts like a modulation wheel, which is all surprisingly expressive for an A4 sheet of glass!

Checking out the 160 factory presets, I reckon there are plenty I'd use unaltered, but creating originals is easy and fun. Seriously, within a couple of days I'd programmed more patches for Addictive Synth than for any other app I own. This translates to expensive‑sounding electronic pads or analogue-ish basses, through spooky digital choirs and rattling sequencer patterns. There's a wider palette than I'd expected, and it's a pleasant change from the usual analogue wannabes.

Probably my favourite feature, though, is the looper. It's perfectly judged, with four equal loops of up to 16 bars and, thanks to the individual level sliders, is ideal for improvising ambient soundscapes or layering arpeggios for building backing loops. You can paste in audio from other apps (or internally) too, and jam along while capturing the lot in the audio recorder.

Finally, the Effect page offers delay, EQ and a choice of either phaser, flanger or chorus, plus, last, but definitely not least, a rather decent reverb. Its maximum reverb time is a remarkable 100 seconds, making this very possibly the ultimate portable ambience app! The effects make a major contribution to what is already a professional-sounding synth, although I found one bug in the flanger of the review version: crank up the feedback too high and the synth is silenced, requiring a reboot.

Despite being crammed with features, Addictive Synth is highly accessible, and, having acquired a renewed appetite for additive synthesis, thanks to Rob Papen's Blade, I was amazed to find such a complete and powerful synth in app form. Addictive Synth might be the tipping point for any still unconvinced about the iPad's place on stage or in the studio. Almost as addictive as chocolate! Paul Nagle. 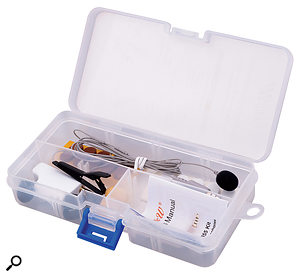 The i825 is supplied in a neat storage box and includes two tan and two black foam windshields plus 10 self-adhesive strips. Also included are two crocodile clips, and an adaptor that allows the mic and a pair of conventional earphones or headphones to be connected to the iOS device simultaneously.

MicW's products are amongst the upper tier of high-quality Chinese microphones. As well as top-end studio and measurement microphones, the company also produce a range of rather more affordable electret microphones intended for iOS devices such as the iPhone, iPad, iPod Touch, and other portable devices. Not surprisingly, the range is called the i-Series, with six models currently available. The latest addition is a pair of traditional lavalier or 'tie-clip mic' designs. The i855 is a cardioid model, while the subject of this review, the i825, is an omnidirectional version. Both have tiny capsules, measuring 4mm in diameter and 11mm in length (while weighing about five grams), and terminate their 1.6m long cables with 3.5mm, four-pole headset plugs.

The tiny grey mic capsule is permanently connected to the miniature grey 3.5mm plug by an even tinier grey cable, which measures no more than 1mm in diameter. Despite its remarkably thread-like design, the cable actually feels very strong and resilient, but still quite flexible. Sensitivity for the i825 is given as 5.6mV/Pa (which is 4dB higher than the cardioid i855 model), and although the specifications don't include a self-noise figure, MicW claim a signal-to-noise ratio of over 65dB.

The key to getting the best from lavalier mics is to spend some time and care 'dressing' the cable — which means carefully securing the mic and arranging the cable. Not only does careful fitting and cable dressing look a lot neater, it is also likely to increase the chances of the mic staying where you want it, and significantly reduce unwanted noise like clothes rustles and rubbing — both on the capsule and on the cable (which will transmit vibrations up to the capsule very easily).

The supplied tie and collar clips are a good start for securing the mic to clothing, and the self-adhesive pads (which don't seem to leave any residue and are easy to peel off afterwards) are handy for attaching the mic to instrument bodies (acoustic guitars, violins, and so on) as well as some fabrics. Pressure-operated mics (all omnis) are inherently fairly immune to wind noises, but the foam windshields supplied in the kit are helpful in extreme cases, as well as for keeping some space around the capsule to help reduce rustling when the mic is mounted under clothing.

I found that the i825 worked well with both an iPod Touch and an iPhone 4, providing a sensible level to the various sound recording and voice-memo apps I tried, like the excellent FiRe app and Apple's own voice-memo facility. When using FiRe, a little additional input gain was beneficial for spoken-voice recordings. Using it as an external mic feeding an SPL meter app, spoken voice registered around 70dB SPL. There was some audible noise on the recordings I made, but quality was perfectly adequate on spoken voice, and I managed some fairly respectable recordings using the mic taped to an acoustic guitar.

This kind of setup is never going to give truly professional results, but the sound quality can be surprisingly good, and it is certainly a very convenient and compact approach for grabbing impromptu interviews or serving as a musical notepad for ideas and inspirations. The MicW i825 is pretty expensive, though, and I'm not entirely sure I could justify that kind of expense when there are much cheaper but fundamentally similar lavalier electrets from established companies like Audio-Technica and Olympus on the market — although not all have the appropriate four-pole plug. There are also several dedicated iPhone stereo mic adaptors available, such as Tascam's iM2, for significantly less. However, the i825 is nicely presented, with a flexible kit of accessories, and the build and sound quality appear to be very good. This is a very niche market, but MicW's offerings are well specified and carefully thought out, with appropriate accessories and features. Hugh Robjohns 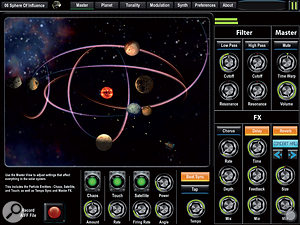 SpaceWiz is the latest app from Dream Theater keyboardist Jordan Rudess and his company Wizdom Music, and straddles the line between performance instrument and algorithmic composer. The interface features an intuitive, touch-based methodology that is fun to work with and likely to inspire experimentation. The ability to tweak is just deep enough to keep you engaged for hours.

The app features eight planets, which serve as sound generators. These revolve around an axis, the angle and speed under user control. A separate particle generator in the form of a satellite introduces a degree of randomness to the patterns being internally generated. You can restrain events to subdivisions of the beat (1/2, 1/4, 1/16th, and so on), as well as the direction that the planets rotate.

There are four primary ways to generate sound. The most obvious is to touch the screen and wiggle your finger or tap on planets. As with most Wizdom music apps, the touch interface and the degree to which the user physically interacts with the device is what makes these apps come to life. Next is the Chaos emitter, which randomly generates particles that trigger sounds when colliding with planets, or bouncing off one planet and hitting another. How quickly you hear those sounds depends on the attack envelope of the particular sound and how many voices are assigned to the planet (from 1-16). The third way to generate sound is via a Satellite, with which you shoot particles at planets, much as if you were playing a video game. Finally, a mono synthesizer is available to play with either a dedicated keyboard on the Synth page or by interacting with an invisible grid in the Main window. The cutoff frequency of the filter can be mapped to the Y-axis, so notes played vertically higher will be brighter than notes played lower on the screen. A randomise button is available to further vary sounds.

The Tonality page allows the user to set the root key of the music, and restrict notes to specific chords, scales and modes. Things can get very interesting here, with almost every variation available, allowing you to move from pleasant tonic to extreme dissonance. You can also create custom tonalities, and individual planets can override the master tonality and be assigned their own scale or interval. A Modulation page allows for parameter assignment to specific planets, touch position or built-in accelerometer.

A pleasant surprise is the ability to assign a planet to a MIDI channel output. I created some very musical compositions by recording MIDI data into Pro Tools and triggering virtual instruments. These became solid building-blocks for further song creation. User patches can be saved and emailed from within the app. AIFF file recording is available too.

SpaceWiz is fun to play, sounds great, and is easy to use. You may not write your next pop hit with it, but you may well find it useful for your next film score or prog rock epic. Bill Lacey