The FB2 is an unusual pedal incorporating some rather clever technology that allows guitar players to create genuine feedback-powered sustain, but at relatively low levels. The pedal also doubles as a gain booster with variable tone and character, so that valve amps can be pushed into natural overdrive without losing any of the original tone. It follows the usual Boss pedal format and has a 45mA current draw, so an alkaline battery lasts only around nine hours, and PSU operation is recommended. 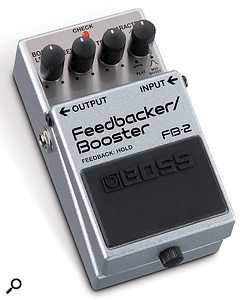 The pedal's four knobs control Boost, Feedback, Tone and Character, with the pedal operating a bypass or, when pressed and held, morphing into the feedback mode. As a clean booster, the Tone control is fairly neutral around its centre position, brightening the sound as you go clockwise or rounding off the highs when turned counter-clockwise. This works in tandem with the Character control, which is essentially a variable mid-frequency boost that sounds very effective when pushing an amp into overdrive. There's nothing too mysterious so far, then, although you can set up a boost level for solos, then back off the guitar volume control to get a clean sound that's pretty much what you'd expect to hear with the guitar turned fully up and the pedal bypassed. The only other pedal I've tried so far that handles this as well is my Fulltone OCD.

The Feedback knob controls the strength of the feedback effect when the pedal is pressed and held, and what you get is real feedback — not an oscillator-based sleight of hand, as with earlier feedback pedals — so this won't work with headphones. Although there's no explanation of how this trick is done, I've listened very carefully to the pedal and run a few tests, and I'm pretty sure that I know what's going on... As you play, a tracking band-pass filter follows the guitar notes as you play, then, when you hit the pedal, this filter pitch is frozen, based on the note you just played and the gain is faded up, provoking feedback at that frequency. You can apply vibrato to the note being held and it still sustains, but if you slide to a different note while still holding the pedal, the new note will fall outside the filter range and the feedback effect will be reduced or lost altogether.

In use, the booster pedal works as expected until you press and hold the pedal, at which point the feedback effect is faded in over a period of a second or two, and the guitar tonality changes because of the filtering and extra gain that's been added. If the amp level is set too low, the sustained note eventually dies away and you're just left with boosted pickup hum and amp noise, but it's surprising how quietly you can play and still get the effect to work. When you release the pedal, the transition back to the clean boost tone is also smooth.

The FB2 is worth the ticket price as a really high quality, low-noise gain booster with tonal adjustment alone, but in the studio, the ability to create those stadium-style feedback effects on demand and at sensible volumes is very appealing indeed, making it great value. Paul White