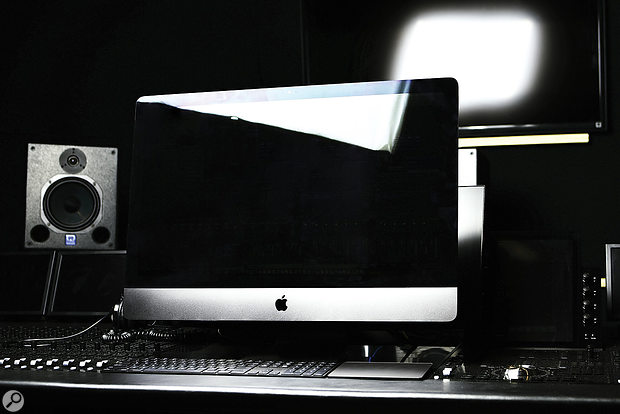 Despite the iMac moniker, the iMac Pro is a very impressive machine. Is it the computer that Mac‑based musicians and audio engineers have been waiting for?

I don’t think it would be unfair to suggest that Apple’s strategy for professional desktops has been rather confusing over the last few years. In 2013, perhaps due to the pressure of not having significantly upgraded the Mac Pro in three years, the company made the somewhat unprecedented move of presenting a ‘sneak peak’ of the next‑generation model.

Released into the market six months later, the new Mac Pro was quickly dubbed — and not with a sense of affection, I think — the ‘trashcan’. It was a bold design choice, to be sure, eschewing internal upgradability in favour of external expansion connected via Thunderbolt. But Apple ended up creating a system that even the company themselves couldn’t upgrade: no new Mac Pro model based on this design ever appeared.

Last year, in April, Apple’s Senior Vice President of Worldwide Marketing, Phil Schiller, admitted the company were “completely rethinking” the Mac Pro, conceding that while the trashcan had suited some professional workflows, it hadn’t succeeded in others. He went on to say that Apple were in the process of developing a new, ‘modular’ Mac Pro, now scheduled for release next year. However, what wasn’t disclosed in this discussion about the company’s future ‘pro’ Mac plan was that, in typical Apple fashion, they had ‘one more thing’ up their sleeve. Two months later, at the company’s 2017 Worldwide Developers Conference, the iMac Pro was announced.

Hello, I Am iMac Pro

Though nearly physically identical to the regular 27‑inch iMac, the iMac Pro is distinguished by its Space Grey finish. This appearance is carried through to the supplied Magic Keyboard (with a numeric keypad), the optional Magic Trackpad 2, and the black — sorry, I mean Space Grey — Magic Mouse 2.

The keyboard has the same feel as the so‑called Butterfly mechanism Apple use on the latest MacBook Pros, and I have to say that I’m not a fan. There’s less key travel, and it feels a bit like playing the harpsichord in that you can feel the click of the key as you press it. Admittedly, whether you like the feel of the keyboard or not is obviously a personal preference, and you can always use an alternative keyboard if you prefer.

Similarly, I’ve never really liked the Magic Trackpad, although there’s one really good reason to get one with the iMac Pro as the latest model supports Force Touch. This enables you to perform certain actions more efficiently by applying a little more pressure; so in the Finder you can Force Touch a file to trigger Quick Look, for example. Logic Pro X also supports Force Touch, allowing you to create a Region by Force Touching in the Workspace, or create a Marker by Force Touching in the Marker Track, to name but two handy shortcuts. 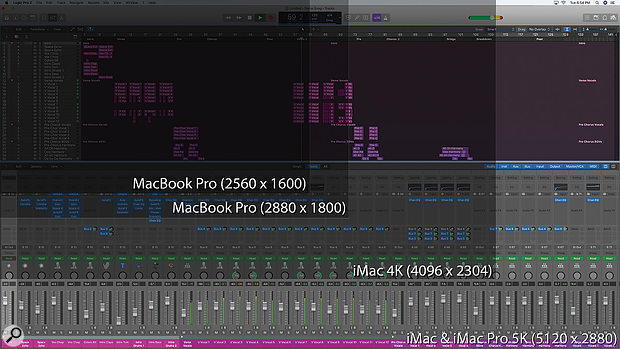 Here you can see a comparison between the different Retina displays used by Apple’s iMac Pro, iMac, and 13‑ and 15‑inch MacBook Pros.

The iMac Pro features the same gorgeous 5K (5120x2880) Retina display as the regular iMac, and applications that take advantage of this, such as Apple’s own Logic Pro X, look incredible. 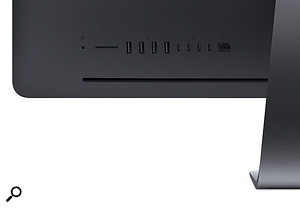 Internally, things are even more interesting. The base model is powered by a 3.2GHz eight‑core Intel Xeon W processor (see box), with 32GB of DDR4 ECC memory running at 2666MHz, a 1TB SSD, and a Radeon Pro Vega 56 GPU with 8GB of on‑package HBM2 (High Bandwidth) memory. Should this base specification be insufficient, there are, of course, many configurable options, as detailed in the ‘Tasting Menu’ box. The top‑of‑the‑line model would feature a 2.3GHz 18‑core Xeon W processor, 128GB of memory, 4TB of SSD storage, and a Radeon Pro Vega 64 GPU with 16GB HBM2 memory. And if your wallet would allow, this would be quite a formidable system.

Even though today’s chips are more power efficient than ever, to incorporate such workstation‑class components in an iMac‑sized enclosure Apple’s engineers had to create an impressive new thermal architecture. Based around dual‑centrifugal fans, with an improved heatsink and additional venting, the iMac Pro offers nearly 75 percent greater airflow than the regular 27‑inch iMac and an 80 percent increase in thermal capacity. What these numbers mean is that the iMac Pro is astonishingly quiet when you consider the performance. I used and witnessed the iMac Pro in many acoustically‑balanced rooms and at no point was the fan any more audible than the hum created by other pieces of equipment in the room. Remarkable, to say the least. 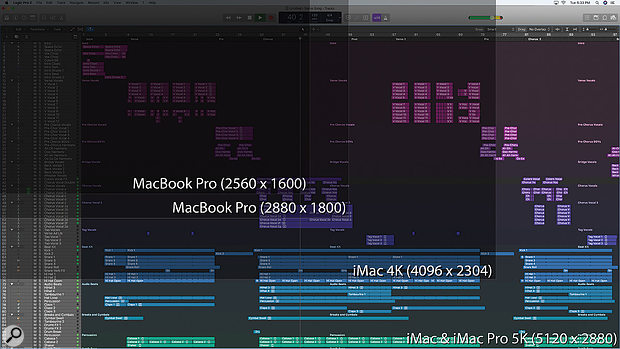 Here’s a similar comparison, this time showing you the maximum number of tracks visible in Logic on different size displays.