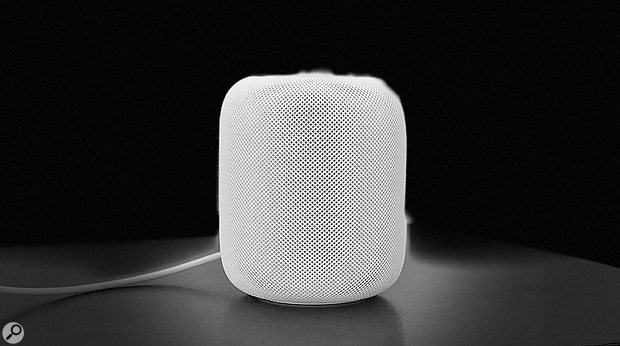 With sophisticated technology at a relatively low price, have Apple created the ultimate consumer listening experience?

Apple’s first foray into the home speaker market was the iPod Hi-Fi, back in the now-quaint era where one would physically dock an iPod with another device to play music. In our present, increasingly wireless world, this concept and even the iPod itself seems Mesozoic, and the iPod Hi-Fi — with its appropriately retro branding — was arguably the most uninspired product the company launched during Steve Jobs’ tenure as CEO. Apple are a company justly known for innovative design, but the iPod Hi-Fi was an unremarkable white box that sounded as boring as it looked. Released in February 2006, it was discontinued in September 2007.

Last year, Apple announced a return to the home speaker market with the HomePod, which finally became available in February, and falls into a product category known as ‘smart speakers’; smart in the sense that you can talk to it and command Siri to do your bidding.

I won’t be discussing the Siri functionality, and you might be wondering why I’m even writing about a speaker aimed at consumers in a magazine that’s read by people who typically use or desire higher-end studio monitoring. But the joke used to be that one should reference mixes in a car, since that’s where most people listened to music. And while people still listen to music in cars, of course, I would posit that the majority of music is now consumed via mobile devices, and, in the home, with speakers like the HomePod. So it makes sense to be aware of the speakers audiences will be using to hear your work.

What’s interesting about the HomePod is the impressive acoustic engineering in a product that retails for £319 (which, at $349 US dollars, is the same price the iPod Hi-Fi sold for in 2006). Initially, I wasn’t going to get a HomePod, but I happened to visit the recently opened Apple Park the day HomePod was released, and inevitably got swept up in the enthusiasm of everyone wishing each other ‘happy HomePod day!’. So I got one and set it up in my living room the minute I walked through the front door.

The HomePod is both heavier and smaller than you would expect, and is completely wireless except for the power cable that, bizarrely, can’t be detached. While some users have demonstrated that it’s technically possible to disconnect the cable with sufficient force, you’ll be charged £25$29 to have it reattached if you damage the HomePod.

I had the opportunity to ask Apple about the power cable, and they explained that the undetachable decision — as one would assume — was completely deliberate. In terms of design, the idea was apparently to make the power cable a coherent part of the product.

The HomePod is undeniably antithetical to the iPod Hi-Fi in that it both looks great, covered with a seamless black or white mesh fabric, and sounds frankly astonishing. Being an audio nerd, the first thing I did was not to play music through it, but rather the trailers companies like Dolby, DTS and THX use to demonstrate the superiority of their respective theatrical sound. I was amazed by the bass response for such a small device, which effortlessly filled the room with depth, accompanied by a reasonably balanced mid-range and an appropriate clarity in the high-end. 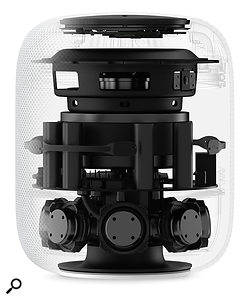 There’s a lot going on beneath the HomePod’s sleek exterior, with the seven tweeters at the bottom, the high-excursion woofer above and the Apple A8 processor at the top.In order to achieve this response, Apple’s engineers did something that initially seems counter intuitive: they put the tweeters at the bottom of the device. There are seven horn-loaded tweeters in the HomePod, each with its own independent, custom amplifier. And the reason for the location is to minimise the reflections from the surface on which the HomePod is placed. Most HomePod users will inevitably place it on table rather than a professional speaker stand, after all.

Given that the HomePod is cylindrical, it will initially emit sound in a 360-degree sound field, and then the real magic happens. The HomePod is equipped with six microphones based on the same technology used in the iPhone’s mics, and, in addition to being used for Siri, they’re also employed to determine the placement of the HomePod in the room. This enables the HomePod to use a process called beamforming so that the tweeter array can adjust the directionality of its output to provide an optimal listening experience.

Should you reposition the HomePod while audio is playing, there’ll be a short interruption in playback while the device sweeps the room again. The initial sweep usually takes a couple of seconds, but the time required to complete the full sweep will vary depending on the complexity of the audio signal.

The design of what Apple describe as a high-excursion subwoofer is equally impressive. Excursion refers to the distance the cone is able to move, and thus the amount of air that can be pushed. And Apple use the word ‘high’ in their description because they’ve been able to drive the sub in the HomePod to achieve 20mm of excursion, which is more than one would usually expect in a four-inch driver.

Also, rather than constantly filtering the low end, which many subs do to avoid distortion, the HomePod uses a look-ahead buffer that enables it to apply a filter when required, working in conjunction with a low-frequency microphone for bass correction. The result is very effective, and Apple paid particular attention to ensure the bass response performs smoothly, even at low amplitudes.

All of the signal processing — the beamforming, bass management, and what’s described as ‘studio-level’ dynamic processing — is handled by Apple’s A8 processor, which was first introduced in the iPhone 6. And this custom SoC (System-on-a-Chip) is also what powers the other capabilities of the HomePod, such as Siri.

From an audio experience, and for a consumer speaker in this price range, the HomePod is unrivalled, and it left me wondering what the implications were if such technology could be applied in a more professional setting. While I don’t expect Apple to release a ‘HomePod Pro’ (not just because of the obvious oxymoron in the branding, but because it would arguably target a market too niche to warrant the company’s attention), speakers that use beamforming to dynamically tune their response to the surroundings in which they’re placed are pretty interesting.

If you have a device capable of communicating with the HomePod, I highly recommend checking it out.

When One Becomes Two

The HomePod is obviously unable to provide a true Stereo listening experience. And while it does a great job in convincingly filling a room with sound, there’s no escaping the directionality of where it’s placed. Having said that, when playing test signals that were panned hard left and right, the HomePod did an admirable job of imitating a stereo image.

However, when Apple release the next iteration of AirPlay, which has appeared and disappeared from various betas of iOS and tvOS in the last few months, it will be possible to use two HomePods in the same room and enjoy a true stereo image. This is no easy task from a technical perspective, to wirelessly synchronise two HomePods, so I can’t wait to hear how well this will work in practice.

It’s perhaps a shame the HomePod doesn’t feature an analogue input, meaning that you’ll only be able to use it if you’re a participant in the Apple ecosystem. This is as understandable as it is frustrating, given the company’s desire to usher us into a seamless, wireless utopia.

Once set up, though, the HomePod can connect to Apple’s online music services independently, which includes Apple Music, Podcasts, Beats 1, music purchased from iTunes, as well as the contents of your iCloud Music Library if you have an Apple Music or iTunes Match subscription. And AirPlay support makes it possible to stream audio to the HomePod from an iPhone, iPad, iPod Touch, Apple TV, or Mac.

Apple have raised the bar for the modern consumer audio experience, employing some seriously clever technology.