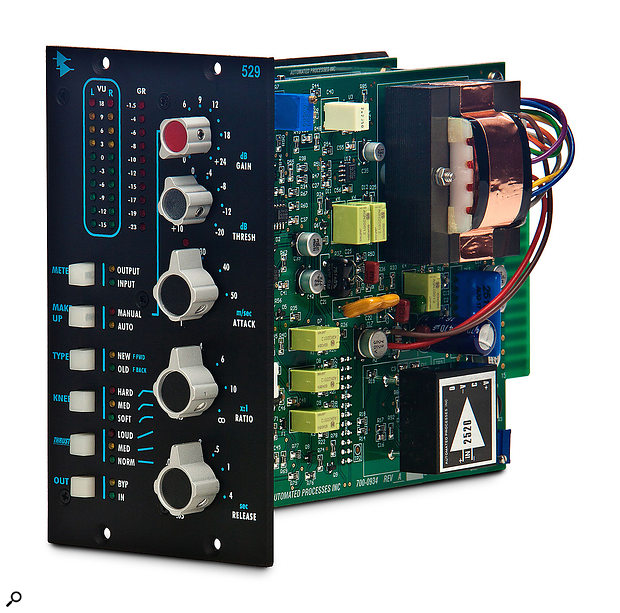 API have made compressors for the 500‑series format for a very long time — the 525 first became available way back in the 1970s! Since then, we’ve seen the 525b, launched in the ’90s, and the 527, which was reviewed by Hugh Robjohns in SOS October 2010 (http://sosm.ag/api-527). Based primarily around the 225L compressor module from API’s highly regarded Legacy Series and Vision consoles, the 527 also included a limited implementation of API’s unique, patented Thrust side-chain filter circuit that defined the operation of the company’s revered rackmount-format 2500 stereo bus compressor. Both modules were mono designs, but API have now taken the next logical step with the introduction of their first ‘doublewide’ 500‑series module: the 529 is a two-channel, stereo-linked bus compressor, with features and facilities borrowed directly from the 2500.

Instantly recognisable as an API product, the 529’s black and blue fascia enjoys a sense of spaciousness, with LED displays, switches and indicator LEDs occupying the height and width of the left half with rotary control knobs on the right. Two 10-segment LED ladder displays occupy the top-left third of the 529 fascia: a stereo VU meter, scaled from -30 to +18 dB, and a single Gain Reduction meter, scaled from -1.5 to -23 dB, illuminate progressively from the top down. Below these, six non-latching mode-select push switches, each with an indicator LED, form a vertical column.

The Meter switch occupies the top spot and sets the VU meter to read either input or output levels. Beneath it, Make Up selects between manual and automatic make-up gain modes, enabling you, in auto mode, to experiment with the ratio and threshold without affecting the level of the outgoing signal. Next in line come three switches, taken straight from the 2500, which determine the operation, and thus the sound, of the 529. The one labelled Type switches the detector circuit between New (feedforward) and Old (feedback) topologies, whilst Knee allows you to select hard, medium or soft knee compression curves. The last of this tonal triumvirate, Thrust, gives you access to three side-chain filter settings (loud, medium and normal), of which more in a moment.

Ingeniously, the final Out switch not only switches the compressor in and out of circuit, but also allows you to switch between a soft bypass (in which the 529’s circuitry remains in the audio path) or a hard, relay-switched bypass, which removes the module from the signal path entirely. 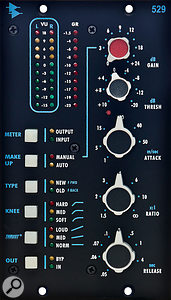 On the other side of the central divide sits the column of five 31-position, detented, continuously variable rotary control knobs that provide instant access to the usual compressor controls of Make-up Gain (0-24 dB), Threshold (+10 to -20 dB, with an LED that flashes red when the threshold is exceeded), Attack (1 to 50 ms), Ratio (1.5:1 to Inf:1) and Release (0.05 to 4 seconds). Comprehensive and effective though all these controls are, given current trends and the asking price, I did find myself wishing for a parallel compression facility on occasion, and a Mid-Sides mode could have been a worthwhile addition too.

The open-frame module, with only the left-hand side carrying a shielding plate, houses a VCA-based compressor that features API’s iconic 2520 and 2510 discrete op-amps (DOA) in its twin audio signal paths. Although the two channel inputs are transformerless, the outputs are balanced by reassuringly chunky transformers.

As you’d expect of API, the layout of the two densely populated circuit boards is exemplary, and the primarily surface-mount components appear to be of very high quality. The PCBs occupy all but a couple of millimetres of the available height inside my rack, with the side of the right-hand transformer’s coil sitting just inside the module’s width limit. Despite this tight fit and the PCBs’ component density, I experienced absolutely no issues with radiated interference, outgoing or incoming, from the 529 — which speaks well of its design quality.

The 529’s side-chain detector uses ‘True Power Summing’ to create a single voltage to control both channel VCAs. What this means, in simple terms, is that when the outputs of the two individual channel RMS detectors are combined, the powers sum to produce a control signal that’s a true representation of the energy in the stereo signal, and that will track that signal accurately over a wide dynamic range, across a wide range of signal levels. One advantage of this type of detector is that, because the summing takes place after detection, the resulting control signal is unaffected by phase, polarity or differences in L-R level and stereo content. Also, since, like human hearing, RMS detection is more sensitive to average signal levels, the resulting compression tends to produce a more natural-sounding result.

Hugh Robjohns gave an excellent explanation of the patented API Thrust side-chain filter back in SOS April 2015 (http://sosm.ag/api-500-thrust) and if you’ve not encountered this feature before, I’d encourage you to read that — it’s arguably the 529’s most significant feature. Instead of the 527’s single -3dB per octave high-pass filter acting below 1kHz, the 529 offers two of the 2500’s Thrust options. The first is loud Thrust, which (as Hugh describes it) applies a +3dB per octave equalisation slope from below 20Hz to above 20kHz, so that each octave across the audio frequency spectrum finishes up containing the same amount of spectral energy. This +3dB per octave slope, in relative terms, reduces the effect on the VCAs’ control signal of the high-energy bass frequencies, and increases the effect of lower-energy high frequencies, to produce a sound generally perceived as having a strong mid-range, a dynamically balanced high end, and plenty of punch in the bass. In the case of medium Thrust, the same EQ slope acts below 200Hz and above 3kHz, leaving the mid-range flat between those two corner frequencies.

To me, the main strength of all the API products that I’m familiar with is their ability to deliver a clean, clear, tight, balanced and musical sound, with a high level of transient detail across the audio spectrum — and the 529 certainly doesn’t disappoint in this respect, even when compressing heavily.

Operation, especially in the automatic make-up gain mode, was pretty much intuitive once I’d familiarised myself with the effects of the various possible mode combinations. I’m well used to the differences between the faster, harder effect of a feedforward compressor and the more laid-back feel of a feedback compressor, and these modes in the 529 performed as I’d expected. The same is true of the soft, medium and hard knee settings.

The medium and, especially, the loud Thrust modes were a revelation; their effect is, as far as I’m concerned, worth the price of admission on their own. There’s a huge temptation just to leave the 529 permanently in loud Thrust, as that setting really does deliver its promise of a punchy weight in the bass, strong mids and a balanced high end — a sound that I found instantly addictive without sounding unnatural (unless I overdid things) on a wide range of electric and acoustic instruments, drums and percussion. Once I’d got past the initial attraction of the loud mode, though, I found that medium also offered options in bringing out the mid-range, whilst still keeping weight and punch in the low end and nicely controlled highs.

Overall, the API 529 is a superbly flexible compressor, whose 18 possible mode combinations (and 923,521 possible settings available, between the threshold, ratio, attack and release controls) should allow you to tailor its operation very precisely to whatever instrument, bus signal or style of music you want to deploy it on.

Even if the 529 can’t exactly be classed as inexpensive, the only other way of getting access to exactly what it offers in hardware form is to buy the more expensive API 2500 rackmount compressor. So the 529’s performance potential easily justifies its professional price tag.

If you’re in need of a 500‑series stereo bus compressor and have the budget available — and can live without built-in M‑S processing and parallel compression modes — then the API 529 should be sitting at, or very near to, the top of your audition list. It really is rather special!

The obvious alternative, especially if you’ve not already invested in a 500‑series chassis, is API’s 2500 stereo bus compressor. There are lots of compressors available in the 500‑series format, but none quite like this; a stereo-linked pair of API 527s would probably be the nearest equivalent.

A superb 500-series stereo bus compressor several of whose features and facilities have been lifted, virtually wholesale, from API’s acclaimed 2500 rackmount equivalent.