App Works: Making Music On The Move By Mark Wherry 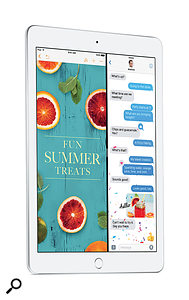 The new iPad is Apple’s most affordable 9.7-inch model to date.Although updates to the iPad Pro line-up are expected this year (including a much-rumoured model with a 10.5-inch display), Apple quietly introduced a new iPad in a press release towards the end of March. Given this diminutive unveiling from a company not usually shy of announcing new hardware, it follows that this new model — called simply iPad — isn’t a new flagship for the company, more an affordable replacement for the iPad Air. This makes a good deal of sense, since it better distinguishes Pro and non-Pro iPad models; and given that the iPad Air 2 had the same depth as the 9.7-inch iPad Pro, the Air moniker was somewhat redundant.

The new iPad is available in Silver, Gold and Space Gray finishes, and its design is similar to the original iPad Air with the same 7.5mm depth. By comparison, the Air 2’s depth was 6.1mm and the 9.7-inch iPad Pro’s 6.5mm. In terms of weight, sticking with the Wi-Fi models, the new iPad comes in at 469g, which is a little heavier than the Air 2 and 9.7-inch Pro that both weigh 437g. Having a 9.7-inch Pro (and an Air 2 before that) as my daily iPad, the extra size is surprisingly apparent despite the small numerical differences. 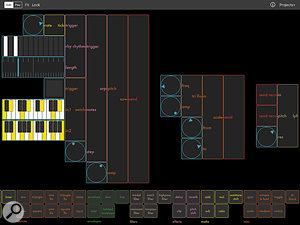 The Ops UI provides a pretty friendly take on DIY modular synth design.While the new iPad features a 9.7-inch Retina display, it’s less advanced than those featured in the Air 2 and 9.7-inch Pro, lacking the latter’s wide colour display and True Tone technology. It isn’t optically bonded (as all 9.7-inch iPad screens have been since the Air 2), meaning there’s a noticeable air gap between the glass and the display. And the screen is more reflective because of this and the lack of anti-reflective coating. However, it’s not a terrible display by any standard, and the absence of newer technologies is presumably due to Apple wanting to hit a certain price. In the same vein, the new iPad doesn’t offer the same impressive, four-speaker sound system as the Pro, although the included speakers at the bottom of the iPad are at least stereo. 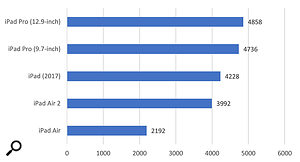 Here you can see the multicore Geekbench 4 results for recent iPad models (longer is better).Internally, the new iPad is powered by Apple’s A9 SoC (system-on-chip), which made its debut in the iPhone 6s towards the end of 2015, and is an upgrade from the A8X chip used in the Air 2 (the 9.7-inch Pro uses an A9X). Turning to Geekbench to measure performance, the new iPad has a multicore score of 4228, and a single-core score of 2318, placing it respectably between the Air 2 and the 9.7-inch Pro. Like these models, the iPad has 2GB of memory and is available in two storage tiers: 32GB and 128GB.

When I reviewed the 9.7-inch Pro last year, I described the 32GB storage offered by the base model as ‘meagre’, but at this price and in the context of a non-’Pro’ iPad it seems more acceptable. That said, music and audio apps tend to require a large amount of storage, even for a base install. For example, GarageBand requires 1.7GB, Cubasis 1.03GB, Korg’s Module will eat up 1.39GB, with Gadget consuming 920MB, and, well, you get the idea. Obviously there are smaller apps, particularly synths, MIDI-only apps, and controllers, but, overall, 32GB may not get you very far.

The most important aspect to the new iPad is arguably the price. The iPad starts at just £339$329 for the 32GB Wi-Fi model, with the 128GB alternative priced at £429$429 — Wi-Fi+Cellular models are available for an extra £130$130. While the UK pricing is steeper than it might have been if the value of the pound hadn’t fallen, the entry-level iPad is still £60$179 cheaper than the price of the Air 2 when it was first introduced, and costs much less than the entry-level 9.7-inch Pro that’s currently priced at £549$599.