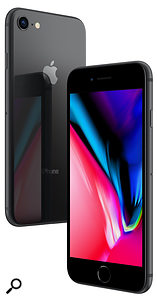 Apple launched the iPhone 8 and 8 Plus in September at the inaugural event held at the Steve Jobs theatre. Following Apple’s previous naming schemes for the iPhone, there’s an argument to suggest these devices should have been christened with the 7s moniker. For one thing, the design is essentially the same as the 7 (not to mention the 6s and 6 before it), and, for the first time in a numerical increase, the iPhone 8 isn’t even Apple’s flagship model. That distinction will belong to the iPhone X (pronounced 10) when it begins shipping in November. However, the iPhone 8 is not to be underestimated. It’s packed with Apple’s latest technologies, and you may prefer its familiar appearance with Touch ID than the X that eschews this feature in favour of the new Face ID.

The first thing you’ll notice about the iPhone 8 — aside from the elegantly-smooth, rear-glass finish — is just how insanely fast it is. Powered by Apple’s latest A11, so-called ‘Bionic’ SoC (System on a Chip) that includes (for the first time) a custom Apple-designed GPU, this is the snappiest iPhone performance you will have ever experienced. The A11 offers six ARM cores: two designed for performance, and four offering less computational prowess in favour of energy efficiency. Apple claim the performance cores are 25 percent faster than those in the previous A10 chip, with the efficiency cores offering a 70 percent improvement. Impressive as these increases are, what’s more notable is that, unlike the A10, which could only utilise two of its four cores simultaneously, the A11 has a controller allowing all six cores to be used at the same time. This will make a big difference when multi-tasking apps, and Apple says that such multi-threaded workflows will be 70 percent faster.

To answer this question, I set up a simple test on both an iPhone 7 Plus and the 8 Plus. Running Audiobus 3, with Reactable’s STEPS sequencer feeding into Korg’s iWavestation (and monitoring the CPU usage with Techet’s Status app), the iPhone 7 Plus peaked at 35 percent usage and the 8 Plus at 15. I’ve been impressed by iPhone performance before, but the A11 is clearly a phenomenal piece of engineering.

The display on the iPhone 8 is of the usual high quality one would expect, and Apple define it as a Retina HD display. Although the resolution is the same — 1334 x 750 for the standard 4.7-inch model, and 1920 x 1080 for the 5.5-inch Plus — the HD appendage reflects the new display’s wider colour gamut and the inclusion of the True Tone functionality from the iPad Pro. This adapts the colour temperature of the display to the environment in which it’s being used, and, as I mentioned when reviewing the 9.7-inch iPad Pro, it’s a subtle effect, although one you notice if disabled.

In recent years Apple have been noticeably improving the audio quality of both iOS and Mac OS-based devices, and the iPhone 8 is no exception. Apple claim the speakers are 25 percent louder with deeper bass, and I have no reason to doubt them. Obviously we’re not talking about studio-quality monitoring, but any improvements to audio quality in a device you’re going to carry around with you every day are welcome.

The iPhone 8 models are really — and perhaps surprisingly — impressive, and I wouldn’t hesitate to recommend them. But the big question is whether to wait (or opt) for the iPhone X. No doubt the X will look desirable, with its edge-to-edge display; although since both are powered by the A11 chip, if you can get the same results at a cheaper price, an iPhone 8 model might be a better option. To hijack the last sentence from a recent column written by the historian Niall Ferguson: “watch this Face”!