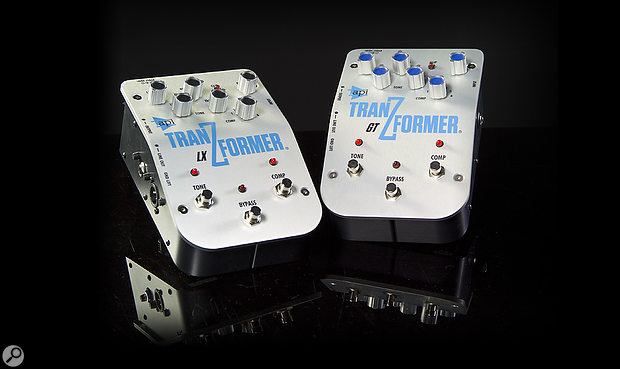 API put the sound of their classic consoles right at your feet!

Until the recent release of their first floor pedals, the TranZformer GT (for guitar) and TranZformer LX (for bass), getting hardware with the sound of an API mixing console required a significant financial investment. But calling these new creations ‘pedals’ is a bit like calling Mount Everest a hill — they’re both much closer to being floor-mounted channel strips.

Each TranZformer is physically quite large and imposing, and the brushed metal front panels of both models carry the same controls: six API-style knobs for the detented input gain and output level attenuator, the compressor and the three-band EQ, plus three, red LED-equipped footswitches that activate the Tone (EQ), compressor and hardwired bypass. Another red LED, next to the gain control, flashes if either the input or output stages start to clip. Quarter-inch TS jacks provide the unbalanced, high-impedance instrument-level input and output, and an XLR connector deals with the transformer-balanced, line-level out. Both outputs feature polarity switches, and a ground lift is provided on the XLR. Power to the pedals comes via an included 18V/250mA wall-wart power supply.

The input jack feeds an API 2510 discrete op-amp, whose output is controlled by the front-panel gain control. From there, the signal passes to the one-knob, API 525-derived, ‘feedback’-type compressor. The compressors in both TranZformers are identical, with an attack time of less than 5ms and a release time that’s quoted as averaging 100ms, as high-frequency/full-bandwidth content is released faster than low-frequency signals, to give more natural envelope tracking. The compression ratio is fixed at 2:1, and the six-position switch both lowers the compressor’s threshold to increase compression as it is turned clockwise, and applies make-up gain to compensate.

Next in line are the pedals’ EQ sections, which reveal the only differences between the GT and LX models. The EQ circuitry consists of a ±15dB, three-frequency, inductor-based circuit “inspired by” API’s classic 553 program equaliser. In the GT version, the low-frequency and mid-range bands have a peaking response, and the high-frequency band a shelving response, whilst on the LX all three bands have a peaking response. The other difference between the sections is that the GT’s EQ acts at 200Hz, 1.2kHz and 5kHz, whereas the LX sees action at 100Hz, 400Hz and 2kHz. From the equaliser, the signal passes to the input of a true audio legend: an API 2520 discrete op-amp that, as in the API 553, drives the output balancing transformer. The signal path splits post-transformer, one branch travelling to the balanced output XLR, and the other to the unbalanced output. In bypass mode, the input and output jacks are directly connected, in order to eliminate any loading by or interaction with the TranZformer’s internal circuitry. This also effectively mutes the XLR output, as its signal is taken post the transformer.

Setting up the TranZformer GT and LX to feed amps via the quarter-inch jack output requires a little forethought. Putting either pedal into bypass removes any gain from the 2510 and 2520 op-amps, so unless you’ve taken care to match the volume of the pedal-enhanced signal with that of the bypassed original via the output level attenuator, hitting bypass will result in an abrupt downwards level change at the high-impedance jack output. 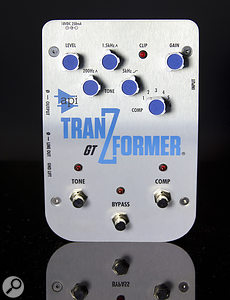 TranZformer GT (for guitar).Although the TranZformers are described by API as guitar and bass pedals, they’re more versatile than that since, before clipping, the input can handle +13dBu, the unbalanced output can deliver +21dBu and the balanced output can manage +27dBu. This means that either pedal can not only handle inputs from other pedals, preamps, keyboards and synths, but also can drive pedals, guitar amps (modelled or real), effects loops, power amps and a mixing console’s line inputs and inserts.

The results I heard when plugging into either model, with both compressor and EQ bypassed and monitoring the balanced XLR output are, to me, worth the price of admission on their own. With each one, I heard the distinctively warm, punchy, detailed, dynamic sound and solid bass that I remember from API’s 512V 500-series preamp (which I reviewed in SOS December 2016). Winding up the input gain brought in more character, the sound feeling somewhat bigger and richer as the transformer began to saturate and the edge of distortion started to creep in.

The compressor is also rather special, the combination of lower input gain levels and its first three settings producing gentle compressions that don’t begin to intrude until the gain is pushed harder. Positions 4-6 are where you start to become aware of the compression, and driving higher levels into these settings causes the compressor to clamp down harder. Although at these higher compression levels the compressors can sound a bit over-fierce for my own taste, on the TranZformer GT it’s capable of delivering compression and lengthy sustain without unwanted pumping. The LX’s compressor is identical and performs to the same high standard, levelling out note volumes, controlling slaps and adding sustain to both acoustic and electric basses, again without any extraneous pumping.

The action and output level of the compressor depends on a combination of input gain, the compressor setting and the frequency spectrum of the signal, which means you must use your ears to determine the compression that you want to achieve. Although the TranZformers’ compressors have a built-in make-up gain structure that can swing the output level from -4dB below the input level to +6dB above it, I found myself wishing for some additional way of altering the make-up gain to more closely match the uncompressed signal level. In a studio situation, this doesn’t matter, as I’d be unlikely to be switching compression up, down or off in the middle of a take; on stage it could be a different story.

Whoever specified the centre frequencies and response curves of the TranZformers’ EQs made great choices. On the GT, a 200Hz boost fattens up single coils and cutting it cleans up humbuckers and acoustic guitars; a 1.2kHz boost opens up the mid-range and adds edge and bite, whilst a cut smooths out over-aggressive guitar sounds without neutering them; and boosting the 5kHz shelf adds a sense of air that’s not over-bright, with a cut dialling back anything untoward in this area and beyond. In addition, because there’s a wide overlap between the response bands at 1.2 and 5 kHz, you can create interesting EQ curves by combining a cut and boost. 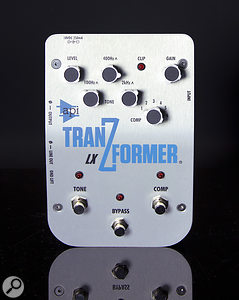 TranZformer LX (for bass).The same goes for the all-peaking EQ in the LX, for which the response at 100Hz can either fatten up a bass’s low end or thin it out to leave room for a keyboard or synth bass. Boosting at 400Hz adds punch and aggression, while a cut can give a more traditional jazz or country-style sound. The 2kHz peak increases clarity and could be used to emphasise articulation, or be dialled back when necessary. In the LX EQ, the overlap between the three peak response curves again gives you additional tonal options when combining a cut and boost on adjacent bands.

Thought of as API console channel strips for acoustic and electric guitars and basses, the TranZformer GT and LX can do no wrong as far as I’m concerned. They offer real value for money for the studio-based guitarist and bassist. The results that can be obtained through them, not only from electric guitars, basses, keyboards and synths, but also from acoustic instruments fitted with microphone-based pickups or active piezo and magnetic systems, are absolutely outstanding.

I’m not so sure how well-suited either pedal is to live use, unless you’re unlikely to be altering settings during the gig, or have time to balance I/O levels between changes. A bigger problem that I have with using the TranZformers on stage is the loss of the XLR outputs when the pedals’ hardwired bypass functions are engaged. In my case, it would silence my PA feed — which is not good.

But these two gig-based weaknesses aside, the API TranZformers are superb channel strips that are optimised for electric guitar and bass and capable of producing stunning results. If you’re a guitarist or bassist looking to upgrade the front end of your DAW or to enhance your pedalboard you should definitely try the appropriate TranZformer. Highly recommended.

For bass or acoustic guitar, a number of pedals offer integrated EQ, compressor and DI facilities, but electric guitarists will most likely need two or three pedals to duplicate the TranZformer GT’s facilities — and even then, nothing will give you quite the sound of the TranZformers.

These pedals are, in essence, floor-mounted channel strips of the highest quality for acoustic and electric guitars and basses.