Making Music On The Move By Paul Nagle

Justifiably described as 'hyper‑connective', the iConnect MIDI4+ is a sophisticated attempt to solve the problems that arise from the integration of iOS devices, Macs and PCs. Physically, the iCM4 is an impressive beast clad in sturdy metal, but its full scope is only seen by firing up the iConnect software and marvelling at the near‑endless potential for routing, mapping, filtering and merging data. Perhaps the most pleasant surprise came when I realised the iCM4 doesn't only route MIDI around an iPad, MIDI hardware, USB controllers and either one or two computers: in addition to that lot, audio can be transferred between up to three devices using iConnectivity's 'Audio Pass‑thru'.

The iCM4 has a pair of MIDI sockets on the front panel and a further three pairs on the rear. Then there are three USB B ports, the first outputting 2.1 amps and therefore sufficient to charge any iOS device. The second is slightly less powerful, but its 1-amp output is still ample to charge an iPod or iPhone, or to significantly slow the discharge of an iPad (to around 1 to 2 percent per hour). The third USB port is on the rear; it has no power output, so would ideally be connected to a PC or Mac. The very last USB connector is an extra USB A type, suitable for class‑compliant MIDI devices such as keyboards or knob boxes. Basically, if your USB controller doesn't require specific drivers, it should be fine with the iCM4. My Behringer UMA25S keyboard worked straightaway and the 500mA output was even enough to power it. Finally, an Ethernet port is provided for network MIDI connections, such as Apple's Network MIDI or the free RTP MIDI driver for Windows.

The cable supplied for iOS connection is the older 30‑pin type. It would have been far better if this were an option at the time of ordering, a change iConnectivity are considering. As it is, owners of more recent iPads will need to purchase Apple's '30‑pin to Lightning' adapter. Fortunately, I was able to temporarily borrow back my old iPad 2 from my wife. Within seconds of plugging in I was freely shooting MIDI from the master keyboard connected to my Mac into iOS apps, then from a regular hardware synth connected to the iCM4's front MIDI input. Later, my Sequentix Cirklon sequencer became yet another USB controller sending notes to the iPad, while simultaneously recording them into Logic. Putting MIDI where I wanted it to go was so straightforward I didn't even need the (free) iConnect software, but in order to route iOS audio into my Mac, I reached for the manual. 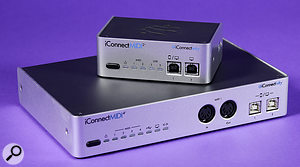 The first step in integrating the iPad's audio with the Mac's regular audio is to create an Aggregate Device. Following instructions on Apple's support pages, this proved to be an easy matter in which a new device is created (in Audio and MIDI setup), its components sourced from my regular soundcard (a Focusrite Saffire Pro24) and the iConnect's audio streams. The resulting Aggregate Device appeared in Logic as if it were a single soundcard, with the combined inputs and outputs visible. As if by magic I was then able to receive the audio from my iPad directly into a Logic track. Had I possessed the appropriate adapter, I could have connected two iPads at the same time but, equally, I could have piped in an audio stream from a second computer.

Impressively, the audio latency was minimal and unobtrusive, although many of my music apps exhibited the MIDI sloppiness I'd started to forget since moving to an iPad Air. One app (VirSyn's wonderful 'Addictive Synth') suffered from crackles that I didn't manage to eradicate, but generally performance was trouble free. As iOS audio is transferred at 16‑bit, this is the setting I had to settle for throughout the system, which seemed a small price to pay. Other than that, the whole experience was surprisingly painless, although I felt that iConnectivity should have provided a few setup examples for popular DAWs to help you get up and running. For example, I experienced feedback on my first attempt to record iPad audio into Logic and had to go and familiarise myself with the I/O of my new Aggregate Device before the source of the loop became obvious.

I'm left with a final impression of the iConnectMIDI4+ as a seriously capable and impressive piece of kit, even though it might have more power than many users will ever exploit. Should this be the case, the iConnectMIDI2+ is smaller, but no less rugged or innovative. It can only handle two computers at once, but still supports 'Audio Pass-thru'. It has twin USB ports on the front and dual MIDI ports on the rear, but unlike its larger sibling, it is shipped without a power supply. Ultimately, both units can operate as simple MIDI interfaces or as part of complex MIDI networks and they offer neat solutions for integrating a wide range of peripherals. After a few weeks of experimentation, all I know for sure is that I have barely skimmed the surface of what's possible. Paul Nagle