Can you really enjoy super-wide stereo sound from such a tiny amp?

The design idea for Blackstar's new ID:Core series of guitar amps was to create a small but impressive-sounding amp that could be used at home for practise or recording — but they also wanted to add a few interesting bells and whistles that would make it usable in a number of other contexts. They've certainly succeeded in doing that, because none of the three models in this range is your typical small practice amp.

There are 10, 20 and 40 W variants to choose from, and they all follow in the tradition of the other amps in the company's ID series — the input signal is converted from analogue to digital and everything from there to the Class-D power-amp stage is done via DSP. They're surprisingly inexpensive, and they're also lightweight and compact, with the largest (40W) model that was sent for review being about the size of a briefcase (340 x 430 x 180 mm).

Despite the diminutive form factor, each of the three models has two speakers, and the sound is delivered in stereo. You might not expect much of a stereo effect from two speakers housed so closely in the same small box — but by means of Blackstar's proprietary DSP-powered Super Wide Stereo processing (which includes some clever use of phase, amongst other tricks that they're not letting on about!) they've managed to make the stereo delay, reverb and modulation effects sound positively huge.

There's also the option to plug in an external music source for general listening, again with stereo enhancement, and although the result obviously won't rival a good pair of studio monitors, it's good, which would be good news for rehearsals. 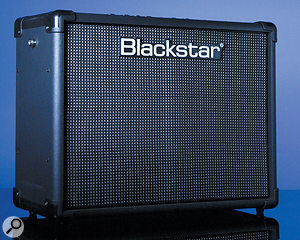 The 40W model's two 6.5-inch speakers are each driven by the 20W, solid-state Class-D amplifier, and power comes from an external PSU. The control panel is relatively simple: you can choose one of six different amplifier voice types (Clean Warm, Clean Bright, Crunch, Super Crunch, OD1 and OD2); Gain and Volume controls are used in combination to balance the amount of overdrive with the overall output level; and EQ comes from Blackstar's ISF control, which moves the character from a US-type voicing to a UK-type voicing. If you want more control over the EQ and other functions you'll have to hook up to a computer via USB and use the free Insider software (www.blackstarinsider.co.uk) to make your edits. A footswitch jack input is also provided, the footswitch function being set using the software, such that you're able to toggle between your choice of two amp voices. There's also a basic guitar tuner.

The onboard effects section offers 12 effect variations. It can deliver modulation, delay and reverb at the same time, and there are four of each type on offer. A rotary 'select and adjust' control moves through the options for the selected effect type and adjusts their main parameter. A tap-tempo button sets the mod and delay rates, and there's a level knob to adjust the currently selected effect's wet/dry mix. All the relevant buttons have built-in LED illumination, the effect selector buttons flipping between dark (off), red (on) and green (selected for editing). A flashing LED in the tap-tempo button lets you know how fast the effects are running. A further button selects manual mode, in which the amp behaves according to the current control settings. If this is off, it loads up whatever settings are included with each amp voice model.

Patches edited using Insider can be shared, uploaded and downloaded via Blackstar's online community, and your amp is able to store any edited settings as part of the six model types on pressing and holding the Manual button. Then, when you call up one of the six voice models, it will fire up with any edits you've made to it, including EQ changes that aren't possible from the front panel itself. The output tube emulation used in the ID series amplifiers is greyed out in the software, as the ID:Core amps have a preset output-stage voicing, but you can still access bass, middle and treble EQ as well as more effect parameters and the setting of the built-in noise gate.

The USB connector isn't used only for editing, though. It also allows you to record from the amp directly to a computer, complete with speaker emulation to give you a miked amp sound. There's a choice of recording in stereo, in mono with one clean feed and one taken from the amplifier, or reamping a clean signal back through the amplifier, these options all being accessed via the software. You can then monitor the recording via the speakers or headphones: a stereo line-out mini-jack doubles as a headphone out. 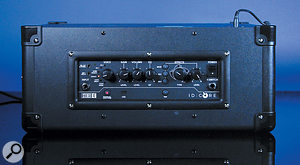 The controls may look fairly familiar, but the USB connector is put to better use than on most amps, with the option of direct-to-computer recording, complete with speaker emulation.

As a guitar amp, the ID:Core 40 sounds much bigger than its size suggests it would, although it probably doesn't play as loudly as a full-scale 40W amplifier. It is certainly loud enough for home use and for open mic nights too, but would probably strain to compete with a drummer unless you miked it up. If you push it too hard, it starts to sound a bit gritty but there's nothing seriously bad there. The basic amp sounds are very capable, running from two shades of clean, through a subtle crunch right up to full-on mayhem, though having no physical EQ controls other than the ISF knob is a little limiting. You get a good ballpark tonality to suit most guitars but to finesse the sound you really need to load up the Insider software and adjust those bass, mid and treble controls. Holding down the Manual button saves the changes, but it would have felt more useful to me if I could have saved any amp voice to any of the six voice positions, as I never use anything beyond Clean and Crunch — being able to save six variations of those two would have been really useful. Having said that, the quality of the modelling is extremely good, with those on-the-edge blues tones coming over well. The speaker-emulated output isn't shoddy either, especially with the effects being stereo. I'd still opt for miking up for recording where possible, though.

As for the effects, they're extremely good: a wonderfully shimmery chorus that doesn't make you seasick; a fluid flange; a phaser that adds movement without being too blatant; and a fine selection of delay and reverb types. Combine the effects with the stereo enhancement and the result is extraordinary, with effects that come at you from everywhere. The last time I heard anything this dramatic was back in the days when things like Q Sound, Spacializer and Roland's RSS box were popular for making stereo seem almost like surround sound. Set up some mild chorus or gentle phaser, plus a hint of delay and you have instant Floyd-esque 'Shine On'. Again, effect adjustment is best done via Insider (each effect module appears as a stompbox with two or three knobs), though there's plenty of scope for effect adjustment using the panel controls. 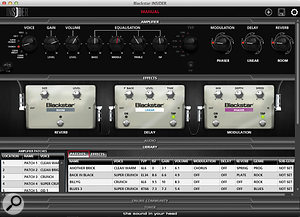 The Insider software opens up a range of useful options that aren't directly accessible via the amp's hardware controls.For general music playback, the amp won't make you sell your hi-fi, but it does sound big, with adequate punch at the low end. It's certainly fine for general music listening or for playing along with your favourite tracks. And finally, the recording side works perfectly, although the recorded level can be a bit on the low side unless you've set the volume fairly high, so you may want to normalise or gain change what you've captured. Your DAW plays back through the amp, so for the most accurate monitoring you need to use the headphone jack. Talking of which, a feature I'd really like to see accessible via the Insider software is the ability to use the line out but still leave the speakers active, as that would be great for small live gigs where you also want to DI the amp into the PA. The mechanical design of the socket may preclude this, but if not it would make a useful addition.

Overall, then, the ID:Core 40 is an impressive achievement, and I'd love to have that wide stereo enhancement in a full-size ID-series amplifier, as it really does sound massive. In fact, the effects are so good that I'd also like to see those in a dedicated pedal. The whole thing weighs less than many of the guitars you might plug into it, yet there's a lot of tonal depth (it even sounded pretty good when I plugged in an acoustic guitar!). As a do-it-all home 'fun' box, this offers pretty much all you need for less than the price of many individual overdrive pedals. There are many small amps, but I can't think of any direct alternatives that offer such versatility along with true stereo effects.

There are no direct equivalents in terms of features, but small amps in this price bracket that are suitable for both practice and recording include Roland's Cube and Vox's smaller Valvetronix models.

This guitar amp is a genuinely useful and good-sounding all-rounder for home recording and practise, and the stereo facility in particular is impressive.