This new brand by revered high‑end equipment manufacturers API is much more affordable than their established lines. So there must be a catch, right? 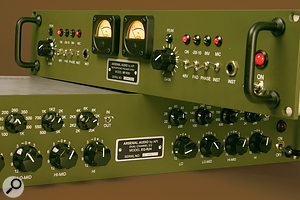 Arsenal is the unlikely title of a new brand name for a range of products developed by respected US audio company API, who date back to the 1960s. The API name is firmly associated with vintage designs, but the goal of the Arsenal brand is to allow the company to take their products in a new direction. The new range currently comprises three units: the R20 mic preamp, the R24 dual-channel equaliser (both of which are reviewed here), and the latter's compact, single-channel API 500‑series equivalent, the V14.

This review kicks off with the R24, a two‑channel, four‑band equaliser that occupies 2U of rack space and is based on the circuit of the vintage APSI 562 solid‑state equaliser, which was originally produced during the late '70s and early '80s — a time when APSI built mixing consoles and equalisers, with API handling their sales. This recreation was prompted by the increasing difficulty of getting hold of an original unit, let alone one in good working order.

Built into an understated, folded‑metal case with an olive-drab front‑panel, the R24 is fitted with fluted Bakelite knobs and a large red power lamp that lights slowly on powering up. Two small bar-handles protect the front panel, as well as making the unit easy to lift in and out of racks, and a metal plate riveted to the centre of the front panel simply states: 'Arsenal Audio by API, Dual Channel EQ Model EQ‑R24', as well as bearing the serial number. Cosmetically, the front panel reminds me of the gear I used to encounter when working for 'the Ministry' in the '60s and '70s. The legending is large and easy to read, with clear marked lines on every knob, but there are no centre detents on the cut/boost knobs.

The R24 is essentially a separate pair of console‑style, four‑band, 'bell curve' equalisers (with frequency and gain but no Q controls), offering two identical channels of equalisation, with a conventional on‑board power supply feeding both channels that can be switched from 115V to 230V operation. This must have generous smoothing capacitors, because the unit continues to operate for up to half a minute or so after the power is switched off.

Continuously variable adjustment of frequency and gain is offered, as opposed to switched steps, with up to 12dB of boost or cut available in each of the bands. A custom‑wound balancing transformer feeds the output, which is available on both jacks and XLRs, with a maximum output level of +24dBu and an impedance of 300Ω. Similarly, the inputs can be on either XLRs or balanced jacks, and these are wired in parallel, with an impedance of 12kΩ. EQ bypass is via nicely retro miniature toggle switches, which operate silent relays, so that all the circuitry is hard‑bypassed when the EQ is switched out.

The rack case is fairly deep (10 inches) and it weighs some 13lbs, so you'll probably want to have a sturdy rack. There are no stereo links or other hidden functions, so what you see on the front panel is what you get — two channels of very straightforward EQ. A peek inside reveals that much of the weight is due to a quarter‑inch-thick metal plate in the bottom of the case acting as an overly generous heat sink for the regulated power supply, which, along with its encapsulated torroidal transformer, resides on a separate circuit board well away from the audio board. The cynic in me wonders if the main purpose of the extra metal is to stimulate the 'heavier must be better' thought-processes of the potential buyer!

Two smaller boards accommodate the front‑panel controls, and these are linked to the main board by two ribbon cables. The main board houses the equaliser circuitry (which is all based around integrated circuits) plus the output transformers and relays. The output connectors are soldered directly to the board, to minimise internal wiring. Overall, the standard of construction is very good and provides good access in the event that servicing becomes necessary.

Built in a similar style, right down to the piece of recycled Chieftain‑tank metal plate at the bottom of the case, the R20 mic preamp is a 2U, two‑channel, solid‑state device, with both a microphone and instrument input on each channel. There are the expected switches for 48V phantom power, polarity‑invert and pad, and the output levels show up on a pair of nicely retro‑style, illuminated, moving‑coil VU meters, augmented by a peak-clip warning LED above the input gain control. In Instrument mode, the pad switch brings in a 10dB attenuator, whereas in Mic mode it brings in a 20dB attenuator. A fully variable pot with a fluted Bakelite knob sets the preamp gain.

The R20 has a no‑nonsense vintage look but is actually a very modern, clean‑sounding device.Other than the instrument input jack, the connectors are all on the rear panel and the outputs are, again, available on both balanced jack and XLR. There's no separate line input as such, but the mic input should be able to handle pretty much any line‑level signal, providing the pad switch is used: the minimum gain can be as low as ‑10dB. However, I'd prefer to see a separate line input, which would reduce the risk of sending phantom power back to the output stage of some innocent line-level device. A separate toggle switch is used to select the instrument input, and all the toggle switches have status LEDs above them.

Despite the vintage styling, the circuitry is decidedly modern, with a THAT Corp 1512 chip at the heart of the mic‑preamp stage. This is a pretty highly specified device that's both quiet and very low in distortion, and it doesn't have any pretensions to a vintage vibe. Another THAT Corp device handles the output balancing — there are no audio transformers in this design. Up to 55dB of mic gain is available, rather than the more usual 60dB, and there's no additional output‑stage gain control to boost this, should it be insufficient for any given application. This being the case, users of low‑sensitivity ribbon mics may find they run out of gain range in some situations, although capacitor mics and dynamic mics used reasonably close to the source should be fine. The instrument input offers a maximum gain of 31dB, which is perfectly adequate for all normal applications with guitars and basses.

Used on a complete mix, the R24 acquitted itself well in all parts of the audio spectrum, with just the right characteristics for gentle tonal nudging. I attempted to emulate the settings using plug‑ins, with the UA Cambridge EQ getting closest and (surprisingly) the UK vintage EQ from Line 6's Pod Farm doing a good job too. But while this reminded me just how good some plug‑ins are now, the R24 always seemed to sound that bit more comfortable, combining a solid low end with a smooth presence.

Interestingly, the R24 isn't one of those analogue EQs that seems to make a big difference when you dial in the odd half a decibel of cut or boost. You need to pull in a couple of decibels of either before the difference becomes really evident — which can be an advantage, because it makes the whole process very controllable. For example, a couple of decibels of boost at 4kHz really lifts a vocal out of a mix but there's no irritating harshness. In fact, the R24 behaves just a like a console EQ — which, given its heritage, is exactly how it should behave. The lack of a Q control doesn't seem to be a problem, because this is the type of equaliser you'd use to gently massage something into shape: if you need a clinical parametric for a particular job, you'd want to look elsewhere. I found the lack of a stereo‑link facility mildly irritating when processing stereo mixes, but incorporating this would have added significantly to the complexity of the circuity and choice of potentiometers. However, a stereo bypass option would have been easy to include, as the switches control relays.

The rear panels of the two units (the R20 mic preamp is pictured) are conventional and almost identical, with inputs and outputs on pairs of balanced XLRs.The R20 mic preamp is a much more modern proposition, with a clean and neutral signal path. It has plenty of headroom and reproduces the high end of a good-quality microphone smoothly, but it isn't what you'd choose to add character. I got pristine results with everything I put through it, but because it is so straight‑ahead, it can be hard to tell it apart from some of the other well‑designed solid‑state, transformerless designs out there. I was impressed by the smoothness of its tone, though — it managed to sound neutral without appearing clinical or cold, and in recording situations where you choose the right microphone to create the necessary character, this is just what you want. The R24 also makes a very effective instrument DI for guitar or bass, capturing the bright edge of an electric guitar particularly well, but without it sounding gritty or distorted. Be warned, though, that if you do deliberately push the preamp into clipping, when the break‑up happens it is very spitty and nasty — so this isn't one of those preamps that you'd normally overdrive for effect.

Given their excellent build quality and vintage-inspired good looks, these two pieces of kit are very attractively priced and perform well in accordance with their design briefs. The R24 equaliser is smooth, musical and very easy to use for general track‑ and mix‑sweetening or home mastering. The R20 is a very competent and well‑mannered mic preamp that satisfies the need for low noise and low distortion. While the R24 has some genuine vintage tonal leanings, the R20 is a strictly 'new technology' mic preamp, and as such has more similar-sounding competitors to fight off — but it more than holds its own within its price range and, providing you don't push it into clipping, it sounds very smooth and expensive. I'm looking forward to seeing how the new Arsenal range develops.

There are so many alternatives that it's hard to know where to start, especially with the R20 mic preamp, since so many competing solid‑state designs, some even based around the same chips, are on the market. However, the cost and performance of these units offers a valid halfway point between the routine and the unaffordably esoteric.

These two units are ideally positioned to attract those users who want to buy something rather better than they already have but who can't afford seriously exotic brands. Neither will disappoint on the performance front.