Can mics at this price really be worthy of a name like AKG? Actually, it seems they can... 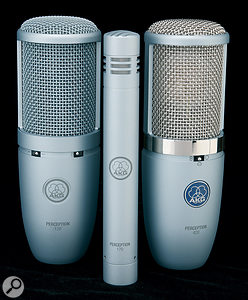 When the big‑name mic manufacturers came under threat from cheap Far Eastern imports, Vienna‑based AKG wasted no time in responding with their own low‑cost models aimed squarely at the home recording market, using economies of scale and ingenious in‑house design technology to keep production costs down. They've now pushed costs down further by designing new mics in Vienna but having them built in China, under AKG supervision. Their Perception series typifies this approach, and we've decided to test three of the models in that range.

The Perception 420 replaces the discontinued Perception 400 and is a dual‑diaphragm, switchable‑pattern, side‑address mic that's intended as a multi‑application studio workhorse. Supplied with a substantial shockmount in a compact aluminium case, the 420 employs a pair of back‑to‑back, one‑inch, true‑capacitor capsules, to offer omni, cardioid and figure‑of‑eight polar patterns, which are selected using a small toggle switch in the cast zinc‑alloy body. There are also a switchable 20dB pad and low‑cut filter (300Hz, 12dB/octave), so, despite its modest price tag, it isn't lacking in features. Other than the pastel‑blue metallic finish, this mic doesn't offer much to challenge the accepted view of what a side‑address studio mic should look like, but the general standard of engineering and finish is excellent.

With the pad switched in, the 420 can handle SPLs up to 155dB, so there's not much that's likely to challenge it in the volume department. Apparently, the design brief was to offer a warm but transparent sound quality, and the manufacturer's listed applications include grand piano, woodwind, brass, drums and percussion (although they make no mention of vocals). The frequency range is quoted simply as 20Hz to 20kHz, which doesn't give much away about mic's voicing — or even about its true frequency response, because no 'dBs down' limits are specified. Fortunately, though, a response curve in the manual is more helpful, showing a reasonably flat response for all three patterns, although the shape and position of the modest presence peak differs for each, as you'd expect. Its sensitivity is 28mV/Pa (‑31dBV) with an A‑weighted signal‑to‑noise ratio of 78dB, so its performance seems to be comparable with other well‑designed mics of a similar type at this price point. Overall, the mic measures 53 x 165 mm and weighs 525g (18.5 ounces), giving it a substantial feel without making it so heavy as to cause the mic stand to sag.

Although not put forward primarily as a vocal mic, there's no reason not to use the 420 for that purpose as long as you're after a fairly neutral sound — most dedicated vocal mics will have a more pronounced presence peak. The mic's resistance to popping is better than average, although a pop shield should always be used when recording vocals, and the general tonal character remains sensibly consistent between the three patterns. There's the inevitable switching click when you change patterns, but the circuitry settles down almost immediately.

As an instrument mic, the 420 comes over as well‑balanced and solid, handling high‑end detail smoothly without over‑hyping it or making everything sound too forward. It works well on acoustic guitar, producing a rich, homogenous sound that balances warmth with detail, again without making the highs seem brittle or forced. Admittedly, there are plenty of mics that will do the job equally well, but given its build quality, price and design provenance, the Perception 420 is a great all‑rounder, and at no time did background noise become evident, despite its very average spec in this department. The shockmount is also worthy of mention because it seems a bit better thought‑out than many of the 'me‑too' designs, and it holds the mic very securely. 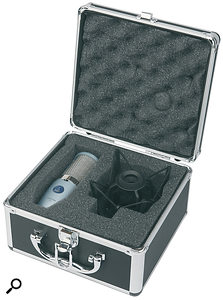 The Perception 420 ships with a high‑quality shockmount that fits the mic very snugly.

Cosmetically similar to the 420, other than for its blue-tinted grille, and with the same pad and roll‑off switches, the Perception 120 is designed for both vocal and instrument use and is based around a cardioid‑pattern, 0.66‑inch‑diameter capsule. It is shipped in a padded cardboard box with no shockmount and again claims a 20Hz to 20kHz response, this time with a sensitivity of 22 mV/Pa (‑33 dBV) and a maximum SPL of 150dB with the pad switched in. I couldn't find a printed response curve for this model, although other basic specifications are provided. This time the signal‑to‑noise ratio is 72dB (A‑weighted), but the dimensions and weight are the same as the 420.

As a vocal mic, the 120 reminds me somewhat of the less costly Audio Technica AT2020, in that it sounds nicely warm and slightly compressed, with a high end that's smooth but not dull. It doesn't stray so far from neutral that it becomes a one‑trick pony, though, and it should suit a range of voice types, including female vocalists who need to lose a bit of edge and gain a bit of depth. While the noise figure, again, isn't particularly low, it is more than adequate for close‑miked vocal applications, and is roughly on a par with many vintage FET mics.

Following the conventional 'stick mic' format, the Perception 170 is a small‑diaphragm, true‑capacitor cardioid microphone with a switchable 20dB pad that's accessed via a recessed slide‑switch in the side of the body. It comes in a simple foam‑lined cardboard box with a stand clip and is coloured the same metallic blue as the rest of the series. Using the pad switch, the mic can, again, deal with SPLs up to a maximum of 155dB SPL, making it suitable for drums and percussion, as well as more delicate acoustic instruments. Its half‑inch diaphragm and associated electronics produce a sensitivity of 12mV/Pa (‑38 dBV), and the noise performance is quoted as both equivalent input noise (EIN), yielding a figure of 21dBA, and as a straightforward signal‑to‑noise ratio, which works out at 73dB (referenced to a level of 1 Pascal). While this is an adequate figure for most general‑purpose studio applications, there are quieter mics around if you need to work with low-level or distant sources, but again, for routine instrument close‑miking it presented no problems. The response curve shows this mic to be nominally flat, with the exception of a presence peak of around 5dB at 10kHz and a gentle dip of a couple of dB centred on 5kHz. Size‑wise, the mic is very conventional, measuring 22 x160 mm and weighing in at 130g (4.6 ounces).

In use, the presence peak translates to an open airiness at the top end, but because the peak is right up at 10kHz it doesn't make the high end seem harsh or honky, as it might if centred at 4kHz or 5kHz, like some other mics. Again, the mic fared well on the acoustic guitar test, combining a confident low end with a nice but subtle sense of airy detail that was more pronounced than with the 420, but was still not overdone. It handles hand percussion equally capably, and if I'd had two to try I'm pretty sure I'd have been able to confirm that they'd work fine as drum overheads. Again, given the price and build quality, the Perception works well as a general‑purpose, cardioid‑pattern, small‑diaphragm mic, and although more money will buy you greater accuracy, there's certainly no excuse not to make excellent recordings with this mic.

There's an awful lot of competition at this price point and, to be frank, what AKG are offering isn't very much different from their competitors — many of whom are similarly using Chinese manufacturing. However, the AKG in‑house design work makes these mics stand out from the usual imported models, as they are both visually and constructionally distinctive. Whether you are drawn to the metallic blue colouring or not is a matter of personal taste, but there's no arguing with the standard or finish. More importantly, when put to the test in the studio, these mics turn in a good performance relative to their price. If you're buying a mic in this price range, the short list will probably be very long, but these AKG models definitely deserve to be on it.

There are too many direct alternatives to each model in this price range to mention them here, but it would be worth checking out models from SE, MXL, Audio Technica, Beyerdynamic and M‑Audio, to name just some of the competition.

This is a very capable range of affordable microphones, but they're not without serious competition at a similar or even lower price point.