ART's DPS II mic preamp has much in common with the ART Digital MPA that I reviewed recently insomuch as it is a dual-channel tube mic preamp with variable impedance, adjustable tube 'flavouring', and an in-built analogue-to-digital converter, but it is different in several key areas. Immediately noticeable is its 1U format, but its 96kHz upper sample-rate limit is also lower than that of its big brother — the Digital MPA goes up to 192kHz — and its tube stage has been configured to offer presets for various types of sound enhancement using a system ART refer to as V3 or Variable Valve Voicing. Amazing, isn't it, that the only time an American company uses the British word for valve is when it happens to conveniently start with the right letter to make up a catchy trademark?

Housed in a striking, dark-blue case with a 'V'-motif grille in the centre, the DPS II comprises two identical channels of microphone preamplification, each of which use hybrid circuitry (a solid-state, discrete preamp followed by an additional 12AX7 tube gain stage) and which can accept mic, line, or high-impedance instrument-level signals. Mic input impedance adjustment is provided via a control covering a continuous range from 150Ω to 3kΩ, and a rotary switch selects from 15 flavours of tube coloration and a neutral mode. In theory, variable input impedance means that the preamp's input stage can be more exactly matched to different types of microphone, but in practice most people treat it as a tone control and twiddle it until they get the best subjective result. Each channel has a phase button and individually switchable phantom power.

While the Digital MPA had a semi-retro look with large mechanical VU meters, the DPS II has a somewhat more 'techy' look to it, though it still sports mechanical tube gain meters, albeit of an 'edge view' low-profile type. Above the mechanical meters are LED-ladder peak meters to monitor the input levels before the tube stage.

The same type of gain structure has been employed as in the company's Digital MPA, where the solid-state preamp operates in tandem with a 20dB gain button to provide gain ranges of up to 48dB or up to 68dB, and the tube drive effects are created when the 20dB button is in, as this drives the tube harder. The output fader knob has another 10dB of gain in hand making the maximum available gain 78dB. Two further Digital Level gain controls at the extreme right of the front panel adjust the level fed into the converters for each channel, and there are two warning LEDs that come on if digital clipping occurs.

Each channel has a Neutrik combi jack/XLR connector on the front panel that can accept either a mic-level XLR or an instrument/line-level signal via its centre jack section. Plugging in a jack overrides the XLR. The jack is high-impedance and unbalanced, so it can handle guitars and basses as well as line-level signals. Although phase switching is provided, there's no low-cut filter; given the number of project-studio mics now coming onto the market with no switchable filters, this could be a limitation. 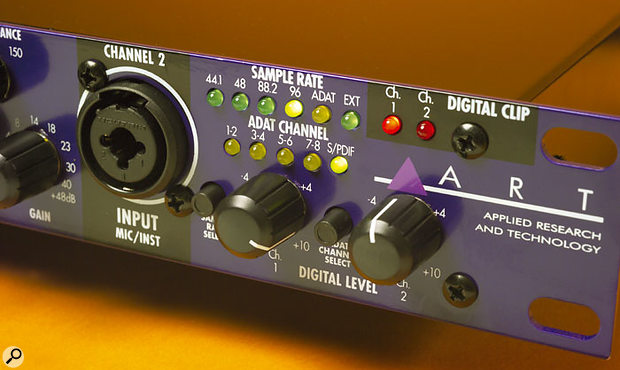 In addition to the analogue Clip indicators which form part of the input stage's LED peak meters, the Digital Clip lights alert you to overloads in the onboard converter.Photo: Mark Ewing

Phantom power can be switched to the mic XLRs, but the rear panel also offers balanced inputs, wired in parallel on both jacks and XLRs, which are designed to handle anything from mic level to modest line levels. This might seem fair enough, but my tests showed that when the phantom power was switched on, it went to both front- and rear-panel XLRs, as well as to the balanced input jack on the rear panel, which could cause serious problems if a piece of sensitive line-level equipment were to be plugged in when the phantom power was on. What's more, the manual doesn't seem to include any obvious warnings about this, though it does spell out the usual caveats on using dynamic mics with phantom power. The front-panel unbalanced jack is of course unaffected.

The outputs are available on both balanced XLRs and unbalanced jacks (+28dBu and +22dBu maximum output levels respectively). Rear-panel TRS insert jacks allow other processors to be inserted into the signal path before the converters, and these may also be used as direct inputs if you simply want to feed another piece of analogue gear through to the converter.

The quoted Equivalent Input Noise (EIN) is -129dBA, which is on the good side of typical, and the frequency response of the analogue circuitry is 5Hz-50kHz, ±0.5dB. Of course the frequency response at the digital output is determined by the choice of sample rate. Whereas the Digital MPA had switchable high and low tube-plate voltages, the DPS II uses a 16-way rotary switch to offer presets based on their V3 concept that have been created for use with voices, various instruments (both electronic and acoustic), and percussion. It's not entirely clear how these settings differ, or even if there's anything else going on other than variations in the degree of tube drive and plate voltage, but the manual does explain that the second eight presets include OPL, which is an in-built Output Protection Limiter. As with all presets, you should experiment to see if some of the settings work well in situations that their name doesn't necessarily imply. In addition to processing individual sounds, it is also interesting to try the unit on stereo mixes, where experimenting with the presets and drive levels reveals different ways of adding warmth and density to a mix.

Digital outputs are becoming more common as the importance of hardware mixers in studios continues to decline and more users choose to send a digital signal from a mic preamp directly to a soundcard or audio-interface digital input. Here the implementation of the digital circuitry is simpler than on the Digital MPA, with only S/PDIF or ADAT output, ADAT input, and a word-clock input BNC connector.

The optical output either carries a traditional stereo S/PDIF signal or ADAT-format signals, while a series of LEDs plus a button on the front panel allow the user to step around the four ADAT output pair options, all ADAT channels, or S/PDIF. The coaxial S/PDIF output is always active. When ADAT mode is selected, anything coming in on the six unused ADAT channels is passed straight through to the ADAT output, while the two mic-preamp signals are sent out on ADAT channels one and two. However, if the all-ADAT option is selected (where all four ADAT LEDs are lit), all four ADAT channel pairs carry the same signal. Similarly, if the optical output lights are all off, any incoming ADAT signal is passed through unchanged on all eight channels.

The sample rate is selected by means of a switch and a row of LEDs, with a choice of 44.1kHz, 48kHz, 88.2kHz, 96kHz, ADAT, and External. ADAT will of course only work at 44.1kHz or 48kHz. The output is at 24-bit resolution, lacking the Digital MPA's ability to dither down to 16 bits, though this shouldn't be a problem, as most people concerned about such things probably record at 24-bit resolution anyway.

My main testing was done using both tube and solid-state capacitor mics, and the different tonalities that could be achieved using the various tube voicings were rather interesting. With some of the settings designed for use with instruments, background noise was audible when using a mic with low sound levels and high amounts of gain, but I imagine this would be insignificant if the designated instruments were being used as sources, as the signal should be much stronger. However, it does mean you have to take care when using these voicings as alternative microphone treatments. The same is also true of the acoustic guitar setting if you're miking the guitar rather than DI'ing it via a pickup. Nevertheless, the neutral V3 position is more than adequately quiet to use with a microphone, as are over half of the presets, and the tonal differences introduced by the various presets range from quite subtle to having a noticeable edge, but none of them sound unnatural unless the amount of drive used is excessive — then the sound can get a bit ragged. It's useful having a peak-limiter option on half the presets, as it can help avoid digital clipping and may also be used sparingly as a gain-reduction effect.

Changing the input impedance makes a subtle difference to the sound, where the higher impedance tends to equate to a little more level and body in the sound, though how much change you get depends very much on the type of microphone you're using. The middle position is pretty safe for any mic. The converters seem to be comparable in quality to those used in the Digital MPA and I had no cause for complaint in this area.

One ergonomic factor that I found a little disconcerting was the close spacing of the three knobs, which not only makes it difficult to adjust them, but also makes it almost impossible to see what's printed under and around them. It doesn't help that the two channels are set out as mirror images of each other, so what is the preamp gain control on one channel can easily be mistaken for the output fader on the other.

But Is It ART?

The DPS II has at its heart a good-sounding mic preamp and surprisingly flexible digital interfacing as standard. The routing of phantom power to the rear-panel jack is rather silly, though, as is the unnecessarily tight knob spacing, while the omission of a high-pass filter will be seen as a cut too far by some. Having said all that, the preset tube flavours are capable of some musically useful variations on the basic sound, and I only wish the manual had gone into some detail as to what each preset actually did. Variable input impedance is a feature only usually found on more esoteric mic preamps, but it offers a little further scope for tonal change. Other than some of the design quirks already mentioned, the DPS II is actually a good little performer and capable of producing great results.

A good-sounding and creative mic preamp that offers a digital output as standard and at a very keen UK price. Watch out for that phantom powered rear-panel jack input though!