Choose from optical and VCA compression, de-essing, noise reduction, and valve voicing within a single processor.

ART's new TCS dual compressor offers the benefits of both application-specific 'character' presets and full manual control (including the ability to adjust the presets) when necessary. Unlike other preset-based machines, the presets here are as much about character as about defining exactly how the compressor is set up, so you can use the default settings as a starting point and fine-tune from there. Alternatively, if you're a bit wary of compressors, you can select a suitable preset, then adjust only the Threshold control to achieve the desired amount of gain reduction.

Furthermore, because compressors are routinely used to add a musical flavour rather than simply to control levels, the ART TCS includes both optical and VCA (Voltage Controlled Amplifier) gain-control stages to offer the best of both worlds. Traditionally, VCA compression tends to be the most transparent, while optical types that rely on a lamp and a photosensitive device are best known for their vintage character. There's also switchable valve circuitry to provide more choice over tonality by inserting a 12AX7 gain stage into the signal path.

Housed in a 1U steel rack case and powered directly from the mains via an IEC connector, the ART TCS offers the user a choice of both balanced XLR and unbalanced jack inputs and outputs operating at +4dBu and -10dBV respectively. There's also a TRS insert jack that can be used to place other processors (usually equalisers) in series with the side-chain. The front panel looks quite busy, but is in fact very logically set out. First of all, a Level control adjusts the instrument input into the compressor. Following this are the familiar Threshold, Ratio (adjustable up to hard limiting), Attack, and Release controls for manual operation or preset tweaking. Note that there is no conventional make-up gain knob within the channel control area. Instead there are two knobs at the extreme right of the front panel that operate as stereo level and balance controls in stereo mode or as separate channel output-level controls in split mono mode.

The input Level control is linked to the high-impedance front-panel instrument-level input jack, and it has a 0-30dB gain range. Plugging anything into this instrument jack overrides the rear-panel input connectors. In addition to the compressor, each channel also features a noise-reduction section that can be either a gate or an expander depending on which preset mode is chosen. The only way to tell which is active is to observe the NR LED, which will gradually dim when in expander mode and switch off more abruptly in gate mode. The only user controls here are Threshold and Shelf, where the latter controls a side-chain filter — when this is fully anticlockwise it makes the side-chain most sensitive to lower frequencies, whereas the fully clockwise position makes the side-chain sensitive predominantly to high frequencies. A central setting gives a nominally flat response.

Gain reduction is monitored by an edgewise moving-coil meter, and though the scale is unreadably small, it gives you a very good idea of what is going on. Directly below this is a set of three buttons, one for bypassing the channel, one for switching the valve circuitry in or out, and one for engaging or bypassing the rear-panel side-chain insert points. This side-chain bypass feature is very useful, as it allows the inserts to be permanently left connected to a patchbay or external processor. To the right of the right-hand channel are two further buttons, one for stereo linking the two channels and one for changing the two high-resolution LED meters between reading the input level and reading the output level. These meters have a peak-hold function and so are very useful for warning of potential clipping problems. When stereo linking is selected, both channels are controlled from the left-hand set of controls and the two side-chains are fed with the same signal to avoid image shifts when compressing asymmetrical mixes.

I've left the most important control until last, and that is the V3 voicing knob. This operates a rotary switch to give different preset and manual processing modes with either optical or VCA compression. Within the optical compression selection there are settings for Bass, Mixes, Vocals, and Choral, as well as the fully manual setting — the Vocals option includes a built-in de-esser for reducing vocal sibilance, and different noise reduction (gate or expander) is used in each case, as detailed in the manual. Switching to VCA mode reveals presets for Vocals, Mixes, Percussion, and Bass, as well as the manual setting, and the vocal preset includes de-essing again.

The remaining V3 knob settings use a combination of optical and VCA gain control. The first combination mode is Stack, which combines both compressor types in such a way that the selected ratio value is effectively doubled — you're really compressing twice. The Sustain preset is designed to do exactly that — add sustain to guitars and other sources — while Nice is a more extreme compressor with character. The Guitar knob position is a guitar-specific patch to add density and to even out the sound.

Finally three OPL presets use the optical circuit for compression, teamed with the VCA circuit rigged as a limiter. This is a nice combination, as you can dial in enough compression to allow the sound to breath, but still catch those high peaks before they cause trouble. The presets on offer are Leveling, Mix, and Vocals. 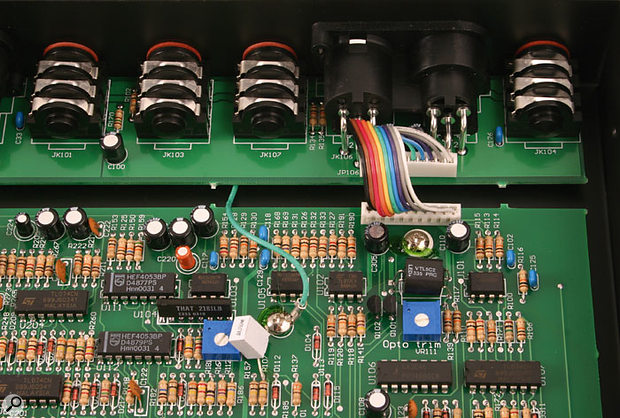 Here you can see the two gain-control elements used in each channel of the ART TCS: a VCA (voltage-controlled amplifier) on the left and an LED-based optical component on the right.Photo: Mike Cameron

In The Studio With The TCS

The manual doesn't make it entirely clear exactly how the front-panel controls interact with the presets, but looking at the gain-reduction meter, it's obvious that they adjust whatever attack and release times are called up, which seem to differ quite a lot between one preset and another. This is to be expected, as part of the art of using a compressor is selecting the correct attack, release, and ratio settings for specific instrument types. The tonality of the sound remains reasonably consistent between presets, but the character of the compression definitely changes, with the optical modes sounding smoother and more rounded than the VCA alternatives.

Having a vocal de-esser built in is also a nice touch, and though this isn't as effective or transparent as a dedicated de-esser that attenuates only problem frequencies, it is very welcome for the bonus feature that it is. The in-built noise reduction also works smoothly enough and saves having to use a separate gate or expander, though I couldn't find any means of monitoring the noise-reduction side-chain filter or the effects of processors connected into the side-chain insert point.

Switching in the valve circuit leaves the top end sounding much the same as before, but there's definitely more weight and warmth at the lower end of the spectrum. This function works equally well on guitar, bass, and vocals, and seems to strike a good balance between being hyped and being too subtle to be significant. On balance, the presets work pretty well for the sources for which they're intended, and having the option to tweak them means you never have to accept something that isn't quite right. I particularly liked the optical compressor character, and the modes that combine this with a VCA limiter are particularly useful, as you get the benefits of both processes in a single preset.

As stated at the outset, compressors are as much about adding character as they are about controlling levels, and the ART TCS manages to do both jobs in an efficient and straightforward way. As a gain-control device, it works much like any other variable-ratio compressor, but the permutations of optical and VCA voicings mean you can choose what type of character you need for each track or mix you process. Having presets is a great way to get into compression without making too many mistakes, yet you still have the opportunity to make manual adjustments or even set up your compressor parameters from scratch if you feel confident in doing that. No compressor will ever be entirely automatic, as the Threshold level needs to be adjusted to take account of the input level and the input signal dynamics, but with the system adopted here, it's very straightforward to get musically consistent results.

Overall I like ART's approach to compression, and though there are more esoteric compressors out there, few offer this amount of flexibility at this UK price and few are easier to use thanks to the wide range of presets and the switchable valve stage. There's even a side-chain filter on the noise gate/expander. You can also use the ART TCS in stereo mode, as two completely independent mono channels, or as an instrument DI with comprehensive compression, so there's no shortage of applications. Given the very attractive price, I've no complaints.

This is a good compressor for beginners, because the presets are so easy to use, but it is also flexible enough to satisfy the needs of the more experienced user.