If you're after convincing analogue-style sounds but you don't want to delve into complex programming, Arturia's Analog Factory may be just the thing.

Arturia will be a familiar name to regular SOS readers. Over the last couple of years, Gordon Reid has reviewed a number of their soft synths (Minimoog V, Moog Modular V, ARP 2600V, CS80V and Prophet V/VS), all intended to provide close emulations of some of the most iconic analogue synths ever created. Despite some minor niggles, Gordon's reaction to these software recreations has been generally very positive. For those not lucky enough to own any of the originals, the Arturia emulations provide much of their sonic palette at an accessible price and in a convenient format. 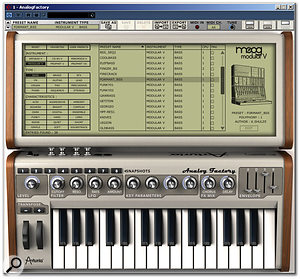 Of course, Arturia are not the only developers of software versions of classic synths. There are lots of similar soft synths out there, and one thing many of them have in common is close recreations of the user interface of the original synths. For the genuine lover of the original instruments, this attention to detail is no doubt very appealing and makes programming the soft synths, superficially at least, similar to their hardware inspiration. However, there are other musicians for whom these 'genuine' details are less significant but who would still love to access recreations of classic synth sounds. For these people, Arturia may have come up with just the thing. Wrapped in a streamlined user interface, Analog Factory is a monotimbral, polyphonic soft synth that contains over 2000 preset patches taken from Arturia's earlier, more detailed, synth products. So if your bag is classic analogue-style synth sounds but you don't want to get your hands too dirty with sound tweaking, is Analog Factory the right synth to pluck off the Arturia production line?

As mentioned above, Gordon Reid's reviews of Arturia's earlier synth offerings have been generally very positive. Readers can, of course, revisit these reviews for a fuller account, but a couple of things are worth restating. First, while Arturia's emulations are not perfect recreations (for example, see Gordon's September 2006 review of Prophet V for a detailed appraisal of the differences between software and hardware), they do come pretty close and can capture much of the analogue vibe. Second, the products have, on occasions, exhibited the occasional quirk. An example is Gordon's recurring complaint about the functioning of the included chorus/delay effects. Arturia have, however, been pretty good at responding to such issues with updates.

One advantage of these software recreations is their price. You obviously would not get an original Prophet 5 for the £150 that Arturia's Prophet V will set you back! That said, to buy all five of the products listed above may be beyond the budget, and possibly also beyond the needs, of some, so Analog Factory seems to make a lot of sense on that front, as it comes in at the same price point as each individual synth product. However, there should be no worries on the sound quality front, as it employs the same 'True Analog Emulation' (TAE) modelling technology that powers the rest of the Arturia range, and so ought to be able to deliver the same convincing analogue-style sound that impressed Gordon in his reviews.

Analog Factory is supplied as both a stand-alone application and in various plug-in formats (VST, Audio Units and RTAS), and so ought to be compatible with most major sequencer packages. I did all my own testing using the VST version via Cubase SX 3.1.1 and Cubase 4. Installation is straightforward, with copy protection provided by a Syncrosoft USB dongle. This is supplied in the box, but if you use other Syncrosoft-protected applications you can put all your licenses on to one dongle.

As you can see from the screenshots, Analog Factory is a relatively simple-looking affair. The interface is dominated by the upper Preset Manager window and the lower Virtual Keyboard window, while an information strip runs along the very top of the main display. 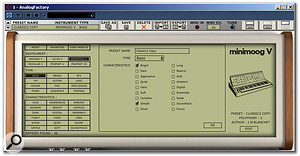 The Preset Manager allows users to search through the presets via various filters, and to store edited patches.The Preset Manager provides a way of filtering the 2000 presets to narrow down the choices displayed in the centre panel. Filters for Instrument, Type and Characteristics can be used to limit the search to only Minimoog V bass sounds, for example. Clicking on a preset name in the centre panel makes that preset the current patch. Usefully, this centre panel also gives an indication of the CPU load of each sound (on a scale of one to five) and also allows the user to specify 'favourite' patches (see screen overleaf).

The Virtual Keyboard window features a short virtual keyboard, plus a modest selection of virtual knobs and sliders. In the main, these controls are self-explanatory and include pitch-bend and modulation wheels, Level, Filter Cutoff and Filter Resonance knobs, and a standard set of amplitude ADSR envelope sliders. The function of the four Key Parameter knobs changes depending upon the patch selected: rolling the mouse across each control produces a pop-up that indicates what the knob does. By concentrating upon these four Key controls, Arturia have been able to make Analog Factory uncluttered and easy to use, although that also obviously limits the degree of user programming that can be done.

The eight Snapshot buttons store eight complete states of Analog Factory, including the selected patch and any configuration of the controls, which would be useful for those taking it on stage, although it might be of less use in a studio context. Users can, of course, also save a tweaked preset as a new patch. All the virtual knobs can be assigned to a hardware controller via a simple MIDI Learn facility: holding down the Ctrl key and right-clicking on a virtual knob assigns it to the next hardware control that's moved. While Analog Factory is neatly designed, it does take up a decent chunk of screen real-estate. Fortunately, space can be saved, as both the top and bottom panels can be toggled on and off if desired.

Given the sizeable number of supplied presets, even auditioning them is a fairly major undertaking for the new user. As indicated earlier, many of these sounds are based upon those available in Arturia's other soft synths, and if you take Analog Factory for what it is — an extensive preset 'best of' library of classic analogue synth sounds, without the detailed editability of Arturia's individual soft synths — you won't be disappointed.

Of course, analogue synth sounds are as much a matter of personal taste as guitar tone, but for me, the bass, lead and pad sounds show Analog Factory at its best. There are, for example, some truly wonderful bass sounds in this collection — from powerful and aggressive through to warm and deep — and I particularly like the Minimoog-style and Prophet-style bass patches. The lead sounds cover an enormous range of timbres and whether it's prog rock or hard-edged dance you're doing, Analog Factory seems to have something that will fit the bill. The pads are excellent, covering a very wide range of textures, and while there's plenty here to satisfy the dance or ambient music producer, these sounds would also have plenty to offer media composers. Indeed, more than once while I was trawling through the full Analog Factory sound set, I was struck by a 1970s Dr Who moment or came across something that reminded me of Brad Fiedel's Terminator soundtrack. Whatever the detailed workings of Arturia's TAE emulation technology, the results are truly impressive. This is one of the most 'analogue'-sounding soft synths I have had the pleasure of using.

Perhaps the only disappointing aspect of Analog Factory is the very limited effects options. While I appreciate that many of the original synths had the same 'shortcoming', it might have been nice for the user to have a little more control over the chorus and delay effects. That said, in a studio context most users will have access to lots of suitable plug-ins via their host sequencer, so this issue may only be of real concern to those wishing to use Analog Factory as a stand-alone synth in a live context.

Arturia don't seem to like standing still. While I was writing this review, the company announced the release of Analog Factory Reloaded. This is an updated version that includes a few bug-fixes but, most significantly, is supplied with an additional 1000 preset sounds, giving 3000 in total. Anyone who purchases Analog Factory before 31st December will be able to download the Reloaded version for free, making the instrument even better value. Full details are available from the Arturia website.

I did my initial testing with Cubase SX 3.1.1 and, while the VST plug-in was generally pretty stable, I did experience the occasional problem, with either the plug-in just shutting itself down or refusing to produce any audio. However, during the course of this review I installed Cubase 4, and under that host I didn't experience a single problem with Analog Factory. On the whole, I think Arturia have produced a pretty stable piece of software and I'd have no hesitation in using it in a studio context. Perhaps my only qualifier would be to recommend that anyone planning to use the plug-in in a live setting does thorough testing on their live rig first.

As with Arturia's other synths, perhaps the only significant downside is that the wonderful analogue-style sounds do seem to come at quite a CPU price. A single instance of Analog Factory playing a five-note chord based on one of the more CPU-hungry presets chewed up about 10 to 12 percent of the CPU resources on my test system — and this system is pretty well specified relative to the stated system requirements.

Analog Factory will perhaps not appeal to those who want a significant degree of control over their sounds, and the ability to make detailed tweaks. However, for those just needing a palette of predefined timbres that capture the signatures of some of the all-time classic analogue hardware synths, it has a lot to offer. In addition, because of its compact format and relatively simple front end it could work extremely well on a laptop as part of a live setup. In whatever context Analog Factory is used, it sounds very good indeed and represents an excellent way of gaining access to a lot of classic analogue sounds for a very modest outlay.

Arturia have a potential winner in Analog Factory: it's reasonably priced and it sounds great.