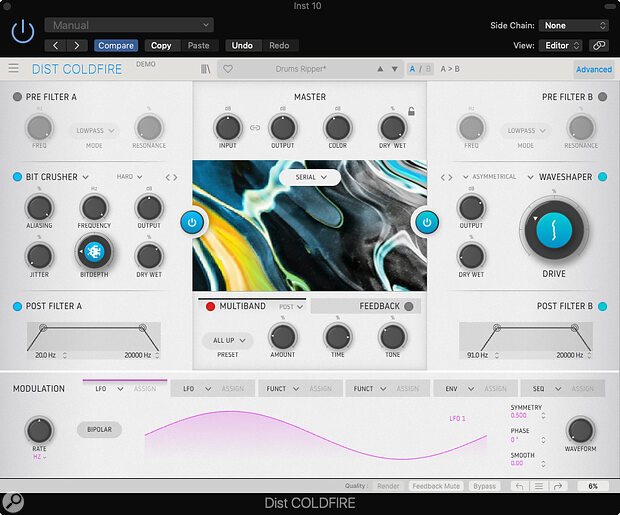 Arturia’s new distortion processor is good for much more than just a bit of dirt and fuzz!

Dist Coldfire features two separate distortion engines, which you can combine in a variety of ways. There is a range of analogue modelled and overtly digital distortion types to choose from, as well as pre‑ and post‑distortion filters for each distortion stage. Add assignable parameter modulation plus dynamics processing, and Dist Coldfire can dish out just about any type of dirt you could wish for — in fact, the only distortion product I’ve used that really bears comparison is Output’s Thermal, but the two plug‑ins have enough differences to make them both unique and worthwhile. Dist Coldfire supports all the common Mac and Windows plug‑in formats, as well as Apple Silicon.

To get you started, there are 150 presets, some designed to turn pedestrian drum loops into ripping, snarling monsters, others tailored to instruments and voice. Each distortion section allows the user to select from any of 11 distortion types, with some categories featuring further sub‑types. The 11 main flavours include bit inverters and bit crushers, wave folders, wave shapers, rectifiers, tape and analogue saturation, driven transformers and so on. The processing also incorporates a delay section, with feedback and filtering, and optional tempo‑sync.

The GUI is clearly set out with the distortion engines either side; master, band‑split and dynamics controls in the centre; and tool tips making the purpose of the controls clear, as well as displaying their current value. The input and output level knobs can be linked, so that increasing the input level decreases the output level, so as to tame the levels when driving the distortion harder. There are separate controls for wet/dry mix and overall output level. Each distortion engine has its own bypass, and a horizontal fader sets the balance between the two.

An advanced panel opens up the pre‑ and post‑distortion filters, the multiband/feedback section and the extensive modulation section, in which tabs can select LFO, Function, Follower or Sequencer options. These modulators may be assigned to pretty much any of Dist Coldfire’s controls, including other modulators, and it’s this modulation capability that makes Coldfire so powerful when you want to get creative with drum loops. That said, the sequencers and function generators can also be used to turn sustained instrument parts into rhythmic elements. While the output filters offer high‑ and low‑cut options, the pre filters also include band‑pass, notch and two comb options, one with feedback and one with feed‑forward. 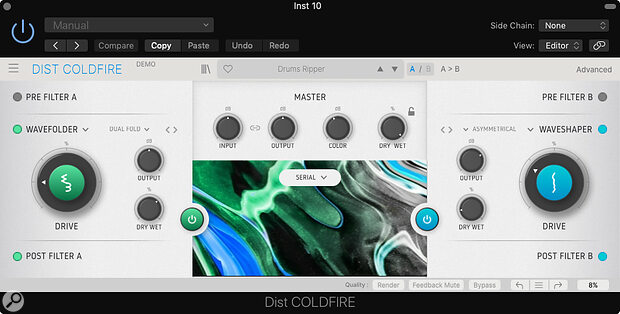 A compact view hides some of the plug‑in’s more sophisticated options, such as filtering and modulation.

Five routing options are available. In addition to the expected stereo, series and parallel configurations, there are band‑split and Mid‑Sides options, and a further button switches the order of the stages. A colourful animation moves according to the type of distortion being applied, but this can be turned off to conserve CPU power or if you find it distracting.

The control layout changes to provide controls appropriate to the selected distortion type. For example, the analogue‑style distortions (and some digital ones) have a large Drive control, while some digital variants may have very specific parameter controls. Bit inverter, for instance, is a little unusual: it first reduces the signal to 8‑bit, then provides eight buttons — one for each bit — that allow ones to be switched to zeros, bits to remain as normal, or selected bits to be set permanently to zero. Rectifier produces a harmonically complex signal with hints of octave‑up, and for this one the large knob adjusts Slope. Wave shaper bends the waveform, producing some interesting harmonics, and there are 11 Wave‑shaping options, ranging from simple clipping, through changes in symmetry to the creation of a staircase shape — and it’s all controlled using just that large Drive knob. Multiband dynamics is based on a selection of preset types with overall Amount, response Time, and Tone controls. The options are Compressor, Multiband or Limiter and these dynamics processors can be positioned pre or post the distortion processing.

Two oversampling options are available: Studio and Render. The latter uses higher resolution at the expense of a higher CPU overhead. Despite the names, whichever is chosen applies to both real‑time processing and offline renders. On my now positively ancient MacBook Pro 2014, CPU usage for the default Render option was typically about 10% (it varied according to the distortion types in play) and fell to around 7% in Studio mode.

This is by no means a ‘standard’ distortion plug‑in! 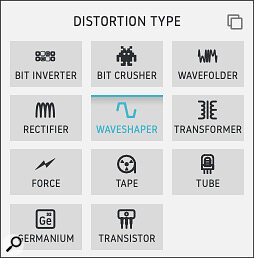 The 11 main distortion types: a different one can be selected for each of the two distortion engines.

It’s somewhat difficult to put into words precisely what Dist Coldfire sounds like — there are just so many options — but I’d stress that this is by no means a ‘standard’ distortion plug‑in! You could use it as a basic ‘fuzz‑it‑up’ processor if you wished, and its tape, valve and transformer emulations in particular make it possible to set up more conventional ‘warm’ distortion types. As a general rule, the digital distortion types are able to produce a lot of enharmonic components, whereas the analogue emulations behave more like overdriven circuitry, producing musically‑related harmonics. If recreating grungy old video game sounds is your thing, that’s well taken care of too.

But it’s capable of so much more. The considerable rhythmic possibilities mean it can turn even quite dull‑sounding drum loops into something that would sit perfectly in contemporary EDM. And being able to impose rhythmic interest on other sources, via the excellent modulation section, is also very powerful; I can foresee a lot of loop designers making great use of Dist Coldfire when creating sample libraries. Similarly, bass sounds can be made to crackle with electricity, in that ‘Minimoog meets lightsaber’ kind of way that remains so popular, while the in‑vogue ‘acid chirp’ synth sound is also served up in one of the presets. Using the various filter, feedback and comb‑filtering options, it’s also possible to add flange‑like and synth‑style resonant filter effects which shape the distortion. And, of course, you can combine analogue and digital distortions types using the band‑split mode, for example to warm up the lows using an analogue emulation while adding some digital aggression to the highs. As the distortion elements can be wielded very precisely in both amount and timing, sounds can become totally transformed — not merely dirtied up.

In summary, then, Dist Coldfire functions as an excellent distortion toolkit. It’s able to create complex effects that fit into pretty much any genre.

One of the most comprehensive distortion plug‑ins around, Dist Coldfire is capable of a huge range of effects.