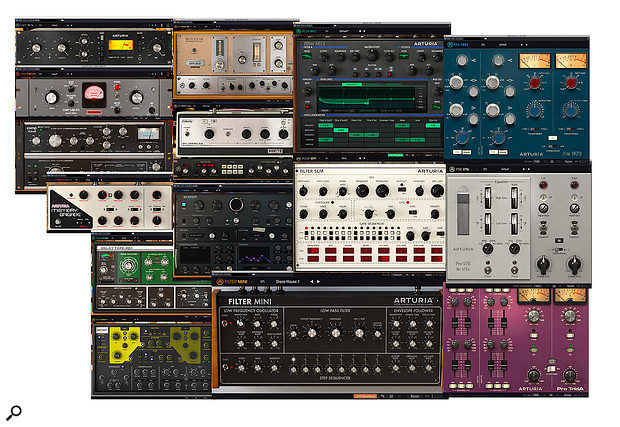 Could these original effects and enhanced classics be the perfect addition to your DAW?

This bundle of 15 plug-ins is organised into five sections: preamps with EQ, dynamics, delay, reverb and filtering. It includes all Arturia's existing 'Three Things' plug-in suites, but adds some new options. Many of the plug-ins are models of classic outboard gear, but most of those have been given extended feature sets. Others are entirely new designs by Arturia. The bundle can be purchased outright or rented monthly, and all the common plug-in formats for Mac and Windows are supported. 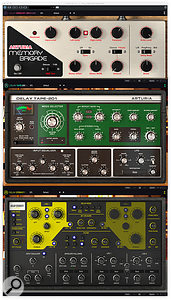 We've already reviewed their Three Filters You'll Actually Use (September 2018: https://sosm.ag/arturia-three-filters) and Three Delays You'll Actually Use (December 2019: https://sosm.ag/arturia-three-delays), so I won't go into detail about those here. Suffice it to say that the Roland RE‑201 and EHX Memory Man models are joined by an original delay called Eternity, which offers independent left and right delay lines, filtering, bit-reduction, LFO modulation and envelope modulation, as well as input EQ. Having those extra modulation features allows the creation of delays-less-ordinary, and makes Eternity hugely flexible and irresistible to old hippies like me! 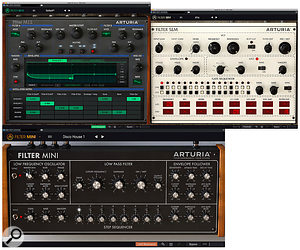 The filters are the Mini, the M12 and the SEM, again sporting controls not found on the originals. Both the Mini and SEM offer step-sequencer control, while the M12 sports comprehensive modulation options. That leaves us with the reverbs, compressors and preamps to explore...

The reverbs are an EMT plate reverb emulation called Plate‑140, the Rev Spring 636, which models the Grampian 636 but with a choice of spring tanks, and Intensity, an original algorithmic reverb. Intensity offers pre- and post- filtering, an envelope follower and a step sequencer, all with host tempo sync available, and a handy Freeze button to transform any reverb decay into an ever-lasting pad. I had a lot of fun with this one! Its LFO and Envelope Follower modulation features can each be used to target up to four different parameters, making it possible to create effects that not only add conventional modulation but also change character according to the way you play. Even its cyclic modulation has hidden depths: as well as the main LFO chorus-style modulation section, a panel of extra parameters allows you to create your own function shape, which can be smooth or stepped to create sequencer effects, and can modulate any four parameters, with different amounts per parameter.

Modulating Intensity's decay time is also rewarding, as this seems to work by changing the clocking frequency of the algorithm — you can get some lovely time-smearing and rhythmic effects, which can work well in ambient genres as long as the rate is locked to the song tempo. Modulating the filter can create some synth-like effects. Then there's the soft clip section, which can add a believable amount of analogue dirt if used sparingly. The more I played around with this reverb the more I liked it, but even if you strip it back to more conventional reverb treatments, it still sounds very smooth and classy.

Plate‑140 benefits from built-in pre-delay, a high-pass filter spanning 20 to 700 Hz and a pair of variable-frequency shelving EQ bands on the output. A modulation section is switchable pre- or post-reverb, with a single control to vary the amount added. Three different plates are modelled so there's plenty of retro choice, and to my ears it sounds very much like the real thing, with the right amount of metallic overtones and a very dense tail. All three plates have a distinctive tonality, so it's all about choosing what works for the song. Filtering out any rumbly lows with the onboard filters really helps get that classic sound.

Intensity offers pre- and post- filtering, an envelope follower and a step sequencer, all with host tempo sync available, and a handy Freeze button can transform any reverb decay into an ever-lasting pad.

The Grampian 636, which now changes hands for several thousand pounds, was well known for its overdriven character, and remains popular with the dub fraternity. This character is faithfully reproduced in Rev Spring 636. The main panel is nearly as sparse as that of the original, with Decay, Stereo Width and Wet/Dry blend controls joined by level-related functions such as Input gain, output trim and mic/Aux Send switching. But the drop-down section offers a choice of pre-filtering types with variable Q, a post-reverb equaliser like the one on the Plate‑140, and eight buttons to select from different reverb tanks: two takes on the original 636, four Accutronics types, the spring from a Space Echo and one labelled Synthi, modelled on the EMS Synthi synth reverb. These spring sounds, which are all different, have just the right amount of twang and 'drip' to sound realistic — but won't twang if you kick your monitor! The Accutronics tanks sound the most polite, leaning in the direction of a plate sound. 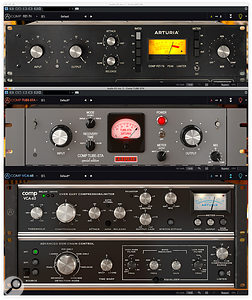 All the compressors are modelled on analogue classics — the dbx 165 'over easy' VCA compressor, the Gates Sta‑Level vari-mu and the FET-based Universal Audio 1176, which is a good selection to cover most mixing needs. They're all effective, good-sounding tools, and their authenticity is comparable with other good emulations I've used. But all three have additional drop-down features to make them more useful for modern DAW-based production. All have side-chain EQ and a choice of channel-linking options.

In the case of VCA‑65 and FET‑76, a further Tone Warp control can adjust the gain-reduction response from Snap to Loose, by offsetting the attack timing to provide lookahead or 'look-behind' timing. A Compression Range control limits the amount of gain reduction.

Modelling mic preamps is tricky as they have different input impedances, and while they may sound similar at normal working levels, they can distort very differently when overdriven. Arturia have taken their influences from the Neve 1073, Trident A-range and Telefunken V76, all of which have made major contributions to music recording, and which have distinctive sounds when pushed hard. There are no fancy drop-down panels, just a control set based on the originals and, in the case of the 1973, a switch to select an alternative transformer.

Because they can't interact directly with the microphone, modelled preamps seldom sound exactly like the real thing, but different examples of real vintage preamps often sound different in any case. The advantage of modelled preamps is that you can try different 'colours' after recording, and these models certainly capture a musical, vintage flavour, without overdoing things. Their differences are most audible when pushed hard, which is useful for adding edge to drums, and each has a different, subjectively pleasant tonality.

Most of these modelled classics have counterparts from competing companies, but Arturia's versions can hold their head up well in most company, and I love that they haven't shied away from adding practical, modern features. The Arturia-designed Intensity reverb and Eternity delay are capable of unique sounds and are lovely, thoughtful plug-ins with numerous possible uses. This is an impressive suite of plug-ins that covers the majority of day-to-day requirements, and unless you have lots of this ground covered already (in which case perhaps take a look at Arturia's individual 'Three...' bundles), the FX Collection represents decent value.

This is a well-rounded set of plug-ins that adds a little vintage flavour and extra flexibility to emulations of industry favourites, as well as providing you with some impressive Arturia originals.