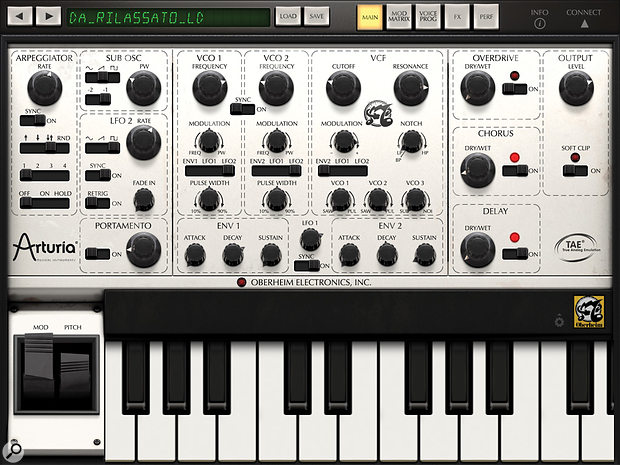 Over the years I've pined for many of the classic synths that, for various reasons (but usually poverty or temporary insanity), I've parted with. Top of my 'most missed' list is the Oberheim Two Voice (TVS1), a truly beautiful instrument consisting of two SEMs (Synthesizer Expander Modules), an eight-step sequencer and an oddly scanned digital keyboard. Less in-your-face than a Moog or an ARP, the SEM's tones were subtle, slightly fuzzy and always creamy — qualities hard to nail in a few words and surely no pushover to mimic in software.

Unintimidated, Arturia did just that last year with the SEM V, and now it's the iPad's turn to try and deliver those elusive but magical tones — assuming you have at least an iPad 2 running iOS 6.0 or later.

An Oberheim SEM is a complete dual-VCO synthesizer module with oscillator sync, pulse-width modulation and a two-pole multi-mode filter. The SEM was multiplied to create Oberheim's very distinctive take on polyphony; unlike other polysynths, each voice had a complete set of controls. You can imagine how this made the eight-voice model a serious proposition to program. To ease the pain of the former, Oberheim produced a programmer module and Arturia's take on this earns iSEM my first thumbs up of the day. Via the 'Voice Prog' page you can specify offsets for up to six parameters for every voice, with up to eight voices and a choice of allocation algorithms supported. Although lacking the specific modes of the TVS1, it is a far more workable approach than negotiating multiple panels would have been, especially as iSEM's controls are rather too small for comfort.

Happily, the app is Core MIDI compatible and, rather than use the on-screen knobs, I assigned the bulk of them to my controller keyboard from which I played and programmed iSEM exclusively. Those who prefer to play now and program later can take comfort in the hundreds of factory sounds from a selection of seasoned programmers.

Arturia's iSEM oscillators are terrific. They're full-bodied and satisfying even before you resort to the (largely unnecessary) sub oscillator.

Arturia's iSEM oscillators are terrific. They're full-bodied and satisfying even before you resort to the (largely unnecessary) sub oscillator. If you rest a finger on an oscillator's frequency control a fine-tune appears, which is a little clumsy but you get used to it.

Turning to the filter, there's a pleasing fuzziness as it sweeps seamlessly from low-pass through to high-pass mode, and though it never quite sizzles with the presence of the real thing, it's pretty good all the same. The band-pass mode also sparked the right kind of memories and my only complaint is that, without the physical switch of the original, it's all too easy to slip from low-pass to band-pass mode unexpectedly. However, I shouldn't nitpick because this is one of the better iPad synth filters. 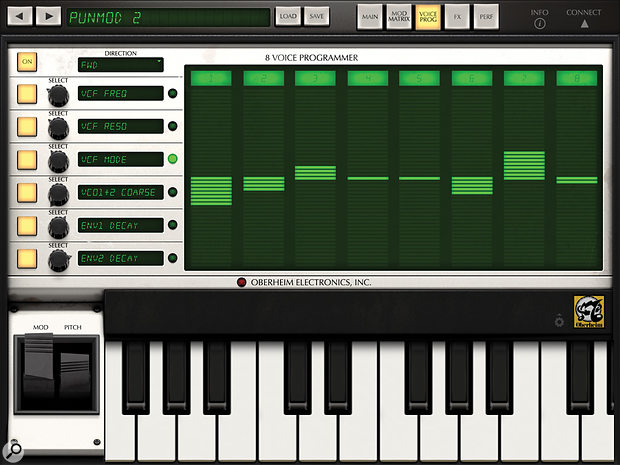 iSEM's Voice Programmer is an effective technique for imitating the variations between voices on a polyphonic SEM system.

I almost daren't mention the envelopes though. They have the same shared decay and release as a SEM, but after that we're in 'digital giveaway' territory. It could be that the term True Analogue Emulation applies mainly to oscillators and filters, but in the circuitry of analogue envelopes, the voltage is not automatically discharged by every gate as it is here. That said, I realise only a few bleary-eyed hippies are going to be inconvenienced by this lack of 'residual voltage' since it's most evident in monophonic patches with long attacks and releases.

Instead of Oberheim's endearing mini sequencer (with its highly useful sample & hold circuitry), the iSEM has a neat arpeggiator with a choice of directions, including random. When combined with the Voice Programmer, I doubt any sequencer fan will be disappointed by the options. More new features have been added, such as an extra LFO global to all voices. In the modulation matrix up to eight sources can be mapped to different destinations and it's lovely to coax iSEM into performing tricks the real deal never could, such as routing an envelope to modulate the filter mode or getting velocity to change LFO speed. Strangely, the matrix offers no connection between key position and filter cutoff.

Perhaps accepting that the knobs could be larger, Arturia have provided a performance screen with four finger-friendly sliders ready to do your bidding. Finally, in a last flourish, the effects section adds overdrive, delay and chorus. If they aren't enough, iSEM is Audiobus compatible for further processing and inter-app recording.

This is a superb analogue-sounding synthesizer that can evoke memories of an SEM and much more. In particular, the implementation of voice variation was fantastic — it's a feature that should be on every polyphonic synth, in my opinion. All that's required is a hippy-appeasing tweak to the envelopes and iSEM will rank amongst the iPad's most convincing modelled analogues. Simply great value for money.