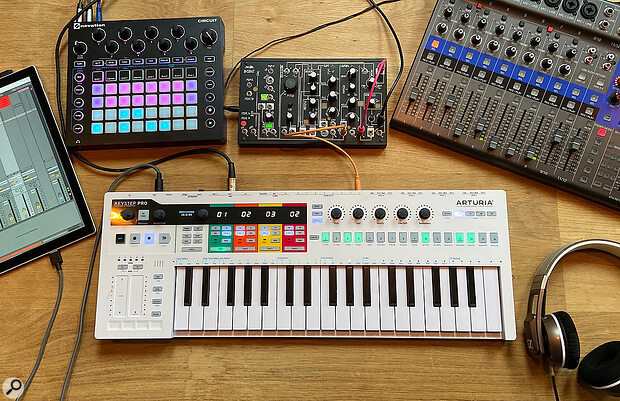 It's been over four years since Arturia whipped the dust cover off their KeyStep polyphonic sequencing keyboard. Most of us supposed that a bigger, multichannel version would have followed on its heels, matching what happened with the BeatStep. In the interim, just about everyone has bought a KeyStep, and the stopgap Pro option was, well, two KeySteps.

It's not just the CV outputs and sequencer that have made the KeyStep such a popular companion to hardware synth rigs. It's also pretty much the only super-mini that's got MIDI ports as well as USB, and so isn't reliant on a computer or other USB host. But while the KeyStep is great as a portable controller, or as an add-on keyboard for a single instrument, it's not a performance and sequencing hub for several devices. But the KeyStep Pro certainly is!

I've Got The Key

The KeyStep Pro is a four-part MIDI/CV sequencer and controller, with a three-octave mini keyboard and five touch-sensitive encoders. All four parts can operate as polyphonic note sequencers running patterns up to 64 steps long. One of these parts can be switched into a drum mode with 24 trigger lanes. The other three parts toggle between sequencer and arpeggiator modes. An additional Control channel lets you generate and automate MIDI CCs with the encoders.

Many of the specs exceed those of the BeatStep Pro: 24 drum tracks instead of 16 and three polyphonic note parts instead of two monophonic. And this is without sacrificing connectivity. You still get analogue trigger outs for the first eight drums, and there are now four voices worth of CV outputs. The two MIDI outputs are full-sized. The analogue clock connections are joined by a Reset output.

...while the KeyStep is great as a portable controller, or as an add-on keyboard for a single instrument, it's not a performance and sequencing hub for several devices. But the KeyStep Pro certainly is!

Accommodating keys instead of pads makes the KeyStep Pro a fair bit larger than the BeatStep Pro, but it still looked tiny in the space where my regular keyboard controller sits. The keys share the bottom half of the surface with some mode buttons and modulation touchstrips. The keys have monophonic aftertouch and key lights which are really handy for seeing what notes are stored on sequencer steps. Above the keys are 16 step buttons and individual colour-coded panels for each of the four tracks. This top control section also has a master panel for project and settings management and transport.

While we're browsing panel features, special mention must go to the metronome. This is part of a dedicated tempo and timing section, with encoders for tempo and swing, and a tap-tempo pad. The stroke of genius here was including a small built-in speaker for the metronome, with a pop-out level knob on the rear of the unit. It's a drag on standalone sequencers when you have to set up an external click source.

The KSP's bountiful connectivity means there are...