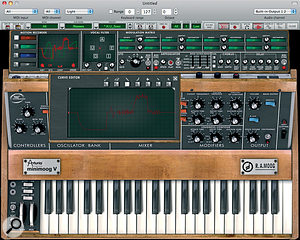 With the panel flipped up, you discover all the extra goodies on offer, including the Vocal Filter and the Motion Recorder. Clicking on the latter reveals the Curve Editor, which allows you to record and draw complex modulation curves.

How can a software synth developer move forward when they've already programmed a Minimoog soft synth that sounds remarkably like its inspiration, is robust and runs on almost every platform? There's only one sensible answer: expand its facilities, but do so in a way that doesn't detract from the essential Minimooginess of the original software. So that's what Arturia has attempted. Ladies and gentlemen, I give you Minimoog V2. 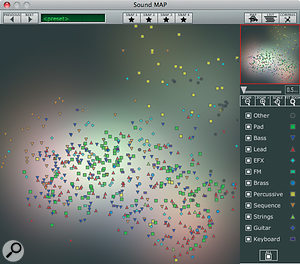 The Sound Map provides a novel three‑dimensional (up/down, left/right and shape/colour) representation of your sounds.

Comparing V2 with earlier versions, it's clear that the differences are not trivial. Only one of these is visible in its so‑called 'classic' mode (the new VCO2 keyboard tracking on/off switch), but as soon as you flip up the control panel to reveal the extra goodies tucked away beneath, you can see that there's a lot more here than in earlier versions. Perhaps of greatest interest will be the addition of a vocal (formant) filter. This is patched permanently into the signal path, but a wet/dry knob allows you to defeat it fully when desired.

Passing white noise through the filter and viewing the results on a spectrum analyser shows that it imposes no fewer than five formant peaks onto the signal so, to some extent, I'm surprised that the vowel sounds it produces are not more realistic. Nonetheless, it's a powerful tool, especially since you can move the vowel positions around in the filter's X/Y display to re‑order them and change the intermediate sounds generated between them, and you can control the amount of filter resonance to alter the intensity of the effect. What's more, a dedicated LFO allows you to rotate the sound through the different vowels, and two new destinations in the modulation matrix allow you to move the filter's position on its X‑ and Y‑axes. Careful programming should yield excellent results. 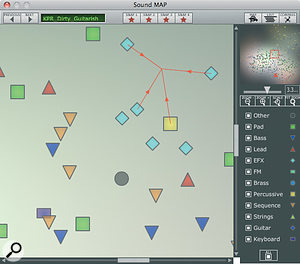 Zooming in on the Sound Map allows to select four adjacent patches and create a new one whose parameters are determined by the relative position of the cursor between them.

The modulation matrix offers three new mod sources, three new destinations, and an extra slot in the matrix itself, which is increased in size from three to four slots.

The new sources include two triggered, quasi‑random signal generators that emulate the operation of traditional Sample & Hold modules. The third — when played in polyphonic mode — is the voice number. This is a curious facility that allows you to affect each note differently, depending upon whether it was the first you played, the second, the third and so on. Some early multi‑keyboards and synths offered a very primitive version of this idea, whereby some sounds would only play once you had exceeded a defined number of simultaneous notes played. The extension of the concept on V2 is much more flexible, and should reward experimentation.

I've already mentioned the two new modulation destinations within the formant filter. The third is the pan position, so if you now want to make your sounds buzz around your head like an angry wasp, you can do so. 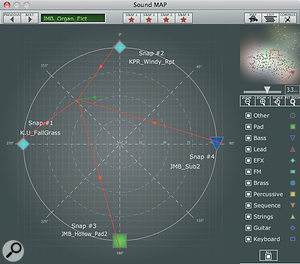 The Compass page provides the means to create new patches that are not close to one another in the representation, but which can be selected manually from anywhere within the Sound Map.

One of the reasons why digital (and digitally controlled) synths caught on so quickly in the 1980s was because they made synthesis reproducible. No longer was a complex sound or effect the unique and unrepeatable product of a given moment. However, nothing in the early days of CPUs and MIDI allowed players to create complex modulation curves within the synth itself, and assign these to parameters that would then change during the course of each note.

Today, Minimoog V2 offers four independent curves that can be recorded from physical knob changes or drawn using a pencil tool and all manner of other graphic options, each of which can be assigned to any one of the modulation destinations. To be honest, this is not for the faint‑hearted, and serendipity is unlikely to yield slick results. But if you plan ahead, the results can be extremely interesting and far more flexible than applying cyclic modulators or contour generators to those destinations.

The final new element is the Sound Map. Far too complex to describe in detail here, this provides an innovative way to display sounds within a three‑dimensional map, and it allows you to choose four existing patches and morph between them, either within the map itself or within a dedicated screen called 'Compass'.

I expected the Sound Map to be a bit of a toy, but I was pleasantly surprised to find myself saving sounds that I stumbled upon. However, don't be misled by the user interface; Minimoog V2 doesn't allow you to morph from one sound to the next as a note progresses, even though it seems on first sight that that should be possible.

Purists may object to Minimoog V2, but they would be wrong. There's nothing here that can't be disabled if you wish to confine yourself to original Minimoog sounds and capabilities, but when you're ready to step beyond the Moog's limitations, the new vocal filter and modulation capabilities allow you to do so, while the Sound Map and automation provide all manner of new ways to use these sounds. Whether you're buying Minimoog V afresh, or obtaining it as a free upgrade to version 1.6, this is all good stuff.

There are numerous pure software synths that claim to respond and sound like a Minimoog but, of these, the only one to rival Minimoog V is (in my experience) the G‑Media Music Minimonsta. This, too, is an excellent emulation that would easily fool listeners into believing that they were hearing the 'real thing', but which — like Minimoog V2 — is also capable of going where no Moog has gone before.

To misquote Nigel Tufnel from Spinal Tap, Minimoog V2 is 0.4 better because it goes up to 2. If it were a breakfast cereal, it would have added nuts and fruity bits, and none of its original wholesome goodness taken away.