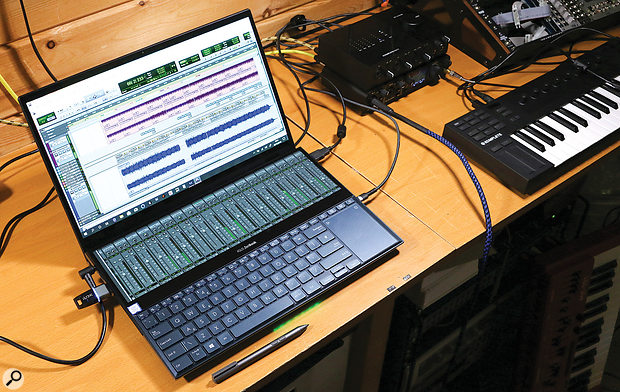 The ZenBook Pro Duo UX581GV has more screens and power than you can shake a stick at. Is it the perfect portable music machine?

This laptop is a sight to behold. You know this is going to be an impressive experience when you unfold the lid and feel the quality of the movement as a slight overhang rotates about the hinge to push the rear up into a comfortable typing angle. The half-screen/half-keyboard arrangement with trackpad placed to the side seems odd at first — but then a screen and a half of 4k UHD OLED desktop beams at you in a gazillion colours, and an involuntary ‘wow’ passes your lips. This is one good–looking machine.

And a quick glance at the ‘Specifications’ box will show you that it’s more than just a pretty face. Current performance benchmarks put it ahead of all current i7 desktop processors and seventh-generation i9 processors. That’s a bit quick for a mobile platform. It also has 45W of TDP heat to get rid of and needs a decent cooling system, which accounts for its reassuringly chunky form.

The keyboard is backlit and has a good feel. Having the trackpad over to the right feels quite natural once you get used to it — assuming you are not a lefty. You also get a digital pen and the most enormous power brick I’ve seen in a long time. This computer is weighty in your hands and solid on the desk. This is not a whip–it–out–on–the–train type of laptop; this wants to sit on a perfectly curated, Instagrammable desk, surrounded by pot plants and a cafetière of artisan coffee.

Out of the box, the Windows 10 installation is unfussy, with only an annoying MyAsus app causing any interruptions. The Resplendence.com LatencyMon software stayed green and pleasingly low for a while, but over time would hit a peak and be declared unfit for real-time audio applications. This is the sort of thing that can usually be cured with a bit of system and power tweaking.

Using the onboard Realtek–based audio drivers, I had no problems getting playback from a range of DAWs and virtual instruments, with the usual 40ms of almost–but–not–quite–playable latency. Audio dropouts would occur from time to time, supporting LatencyMon’s findings. Switching to MOTU’s M4 USB‑C audio interface, I could easily achieve good low latencies, but the occasional dropout would remain. These didn’t appear to be related to CPU load, suggesting a system issue instead. On the other hand, I had a generative patch in VCV Rack running for a couple of hours without a single glitch. Such is the annoyingly inconsistent experience of testing laptops.

The USB‑C port is also a Thunderbolt 3 port, which has the potential for running some quite powerful audio interfaces. I am very happy to report that my Focusrite Clarett 2Pre worked without any bother using a TB2‑TB3 adaptor.

There are two paths you can take with using a laptop for music production. You can relax into the wandering nature of a speed-stepping and Turbo–boosting processor that expands and contracts depending on your plug-in and virtual instrument needs, or you can restrict the speed of the processor for the sake of stability and consistency by turning off Turbo Mode. One gives you the hope of awesome power, the other guarantees the usefulness of moderate power. In either case I recommend running a ‘High Performance’ power profile when using music software, to minimise the potential for glitches in the audio stream.

Using DAWBench 2017, the ZenBook was able to pull off a stable 150 plug-ins even when running at a wafer-thin 16 samples with the MOTU M4 audio interface. In Cubase I could run eight voices on 64 instances of HALion with plenty of headroom. Alternatively, I could run a dozen or so instances of CPU–intensive instruments such as Arturia’s Pigments and Reason’s Europa, provided I eased off on the buffer size. Virtual instruments were perfectly playable at a 128-sample buffer size, even with lots of notes and sustain pedal on. In every case more consistent results were achieved with Turbo Mode disabled.

With Turbo Mode enabled, the machine would be completely fine for quite some time, but then I would encounter the odd glitch when I wasn’t really doing anything. I found that I could force this glitch when I reached out and touched the screen. If I kept my hands to myself, I could work for longer without encountering a problem, but a glitch was always just around the corner. Once I disabled Turbo Mode, all these problems went away.

Some of this is down to the heat. When this went past 60 degrees, the fans would kick in hard and the Turbo speed would plummet from a superficially impressive 4GHz to below the base clock of 2.4GHz until the temperature stabilised. With Turbo Mode disabled, the base clock is not only more stable but the machine also runs cooler and so quieter.

To provide a little bit of a comparison to machines above and below the ZenBook in price, I installed the MOTU M4 on both a desktop PC with an i9-9900K processor running at 4.8GHz and a Microsoft Surface Pro 7 with the i5-1035G4 processor, and ran DAWBench. On the desktop machine all eight inserts were filled across 40 tracks, giving 320 plug-ins at 80 percent CPU. On the Surface Pro 7 I was able to able to achieve a completely stable 72 plug-ins.

It’s going to make your MacBook Pro friends jealous of the size of your touch bar.

The big USP of the ZenBook Pro Duo is the remarkable screen configuration, which is crying out for musical use. The ScreenPad lends itself perfectly to being a mixing console, piano keyboard, set of drum pads or MIDI controller. However, although the hardware is very willing, its usefulness all comes down to how well your software interprets it. 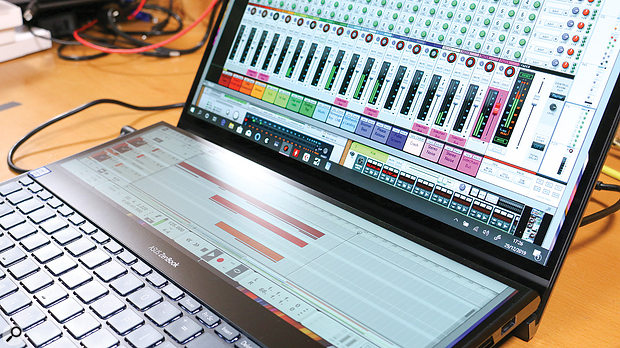 Asus have built in a couple of tools that make the workflow between the two screens fast and groovy. As you grab a window, a little overlay of options appears which lets you instantly throw the window on to the other screen. There’s another button that slides in from the side and lets you swap the windows between each screen. But there’s a big difference in the resolution between the two, and this can make things a little weird as you move windows around. If you drag a window down into the ScreenPad, it will retain its size from the main display until you pass the point of no return, when it pops into a smaller size. The same happens the other way around. So, when stretching between the two screens, it can get confusing as to which way things are going to go.

So, what works? Well, it depends on how the DAW presents itself. ZenBeats (formally StageLight), which is designed for touch, only wants to use a single screen and refused to acknowledge the presence of the ScreenPad. Cubase worked well, because you can have things in different windows. That magic swap button comes into play so you could quickly swap the arrange and mixer windows between screens. In Ableton Live and Reason Studio you can drag the window across both screens and it retains the resolution of the top screen. If you auto-hide the taskbar, that works reasonably well, but you inevitably get a break across something vital.

Bitwig Studio, on the other hand, was born for this device. It can work with multiple screen configurations, meaning you can have the virtual MPE controller keyboard or drum pads on the ScreenPad and the arranger or clip launcher at the top, which is completely awesome. Splitting the Studio One Arrange and Console windows across the main screen and the ScreenPad also works well. The same is true of Pro Tools, but only if you shape the Mix window down to a short and wide mixer; it retains the top resolution and so the faders are full-sized.

Perhaps the best use might come in the form of a touch-based MIDI controller like HiComputer Chameleon or yMIDI Toolbox. Maybe Asus could get someone to create a custom virtual MIDI piano keyboard or drum pads that could be properly sized for the ScreenPad?

The ScreenPad could easily be dismissed as a gimmick, but as someone used to working with touchscreens I found it much more useful, natural and accessible for touch than the main screen. And for conventional non-touch work, it’s a handy extra screen that you quickly absorb into your workflow.

The ZenBook Pro Duo is a fabulously chunky laptop that’s brimming with power, dazzling with the potential of those two screens and equipped with a slightly alarming £3000$3000 price tag.

With the right tweaking it can be tamed into a solid performer, and with the right software it can take full creative advantage of a dual-touchscreen interface. The ScreenPad is a natural place for touch, and its matte finish is much nicer to the fingertips than the squeaky gloss glass of the main display.

With Bitwig Studio it’s a dream machine, Reason handles it quite well and with Cubase and Studio One the ScreenPad makes for a decent console mixer. With other DAWs the display configuration has potential but feels like you’re working hard to make use of something you don’t really need. And for general computing tasks, it’s going to make your MacBook Pro friends envious of the size of your touch bar.

Asus suggest that the ZenBook Pro Duo can run for up to 7.5 hours on its battery. To achieve that you would have to be back on Balanced mode and probably not powering a MIDI keyboard and audio interface. I ran a test with 16 tracks of virtual instruments in PreSonus Studio One Professional while powering the MOTU M4, Komplete M32 keyboard, and an external SSD drive. It managed 1 hour 11 minutes and 25 seconds.

The ZenBook Pro Duo UX581GV is a weighty, premium laptop with desktop–like power and a stunning display configuration. With the right tweaks and the right DAW it can be a very creative and powerful platform for music-making.