The PCI Express peripheral standard is generally good news for musicians, but some audio problems related to this faster interface and certain motherboard chip sets are emerging. We examine the issues.

When I first started using PCs in 1991, most motherboards featured ISA (Industry Standard Architecture) expansion slots. Later on, when the industry introduced the more advanced PCI (Peripheral Component Interconnect) variety, there was a transition period of several years, during which new motherboards provided several of each type of slot, so that users could continue to use their existing ISA peripherals. Eventually, nearly all motherboards abandoned ISA slots altogether, in favour of new models featuring anything up to six PCI slots. This was excellent news for musicians, who could install multiple soundcards and audio DSP cards to provide them with all the facilities they needed. 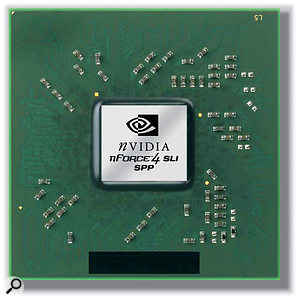 Until recently the flagship chip set for AMD owners, Nvidia's nForce4 is now available in the Intel version shown here, but has unfortunately been at the centre of some problems for musicians owning PCI soundcards.

The new one-inch-long PCI Express x1 expansion slots found in many of the latest motherboards use a high-speed serial buss and provide double the bandwidth of the current PCI slots, while multiple 'lanes' are used to further boost performance of the PCI Express x16 graphics slot, giving it a 4GB/second bandwidth. The vast majority of motherboards that feature this new technology also provide a couple of standard PCI slots for the user's existing devices. The transition period before PCI slots die out on new motherboards could be several years, although this time around it might be shorter, as there are already so many USB and Firewire alternatives to most PCI peripherals.

The transition I've just referred to, however, is being made a lot more troublesome for many musicians because of problems they've encountered with running their PCI soundcards in the 'legacy' slots of some of the first-generation PCI Express motherboards. Although no-one seems entirely sure yet, the audio problems seem to be connected with the x16 high-power graphics capability of PCI Express-equipped motherboards, and are particularly prevalent with Nvidia's nForce4 (NF4) chip sets.

Unveiled in October 2004, the nForce4 chip set initially supported AMD's Athlon 64, 64 FX and Sempron processors and gave them PCI Express features like those of Intel's 915/925 chip set for the Pentium range, as well as the SLI (Scalable Link Interface) feature that allows those with heavy graphic requirements to share the load between two graphics cards. Nvidia subsequently released versions of this NF4 chip set to support AMD's Opteron processor and, most recently, Intel's processor ranges. It is now being widely used, by many motherboard manufacturers; indeed, the nForce4 SLI is currently seen as the flagship chip set for Socket 393 Athlon 64 processors.

However, tests on various PCs featuring this chip set have shown processor overhead that was larger than expected when the PC was running lots of plug-ins, as well as audio glitches unless the interface buffer size (and hence latency) is increased. Some users have reported having to increase buffer size as high as 2048 samples with an NF4 chip set, compared with 128 or 256 samples on a roughly equivalent PC featuring Nvidia's previous NF3 chipset. Although the vast majority of the problems reported by musicians relate to PCI soundcards plugged into the legacy PCI slots on PCI Express-equipped motherboards, RME have reported similar issues with their Fireface 800 interface, so other Firewire interfaces may be affected as well.

Many users suspect that the high-performance 16x graphics card often associated with such systems are somehow hogging the buss, and this hypothesis seems to be confirmed by the fact that replacing such a card with a less powerful model such as Nvidia's 6200 or ATI's Radeon X300 will reduce the problem. In truth, most musicians rarely need such high levels of video performance, and the slower cards also tend not to require noisy cooling fans.

This month, I'd like to officially welcome Mac owners to the PC Notes column, since they will now have even more reason to be interested in its contents. By this time next year, Apple will be selling Macs built around an Intel Pentium processor rather than the Power PC processors of the past. This is partly because they still haven't been able to launch the 3GHz G5 Mac promised two years ago, and also because cooling problems have prevented them from releasing a G5 laptop whose performance rivals that of Intel's popular and powerful Centrino models.

Apple have revealed that every release of Mac OS X over the last five years has been secretly compiled for Intel processors as well as for Power PC (see the Apple Notes column in the last issue of SOS), and that these new Intel-based models will be able to run Windows as well as Mac OS X, although they don't plan to let anyone run their operating system on other Intel-based computers. A Developer Transition Kit consisting of an Intel 3.6GHz Pentium 4 660 computer running OS 10.4.1 for Intel is already available, so that Mac-based developers can get up to speed in re-compiling their code to run on the new machines, and this doesn't seem to be causing them many problems.

For years there have been Mac evangelists who have poured scorn on all PC hardware, so (perhaps unsurprisingly) there's been an outcry from some Mac users about this corporate move, as well as much merriment from some PC users. I've personally worked on so many different personal computing platforms over the years (ZX81, Commodore 64, Atari 400/800 and ST, Amiga, PC) that it doesn't really matter to me what I use, as long as it's reliable when I want to make music (and my PCs nearly always are). I know Mark Wherry owns both Macs and PCs, so his views are likely to be balanced as well, but I'm sure he'll have plenty more to say about this move in the Apple Notes column. However, once the fuss has died down on both sides I sincerely hope that all musicians will forget their previous Mac/PC arguments and just get on with making music.

My advice is to be extremely cautious if you're about to buy a new PC that features PCI Express slots, particularly if it uses Nvidia's nForce4 chip set, and especially if you have several PCI cards that you want to use in its legacy expansion slots. Those who already push the limits of PCI bandwidth, such as musicians with multiple Powercore or UAD1 DSP cards should be particularly wary.

The general consensus of opinion at the moment seems to be that musicians thinking of buying an AMD-based motherboard should probably forego PCI Express altogether and stick with the tried and tested nForce3 chip set and a Socket 939 processor. You needn't be unduly concerned about buying into an evolutionary dead-end, as many of these motherboards should accept more powerful dual-core versions of their processors in due course. 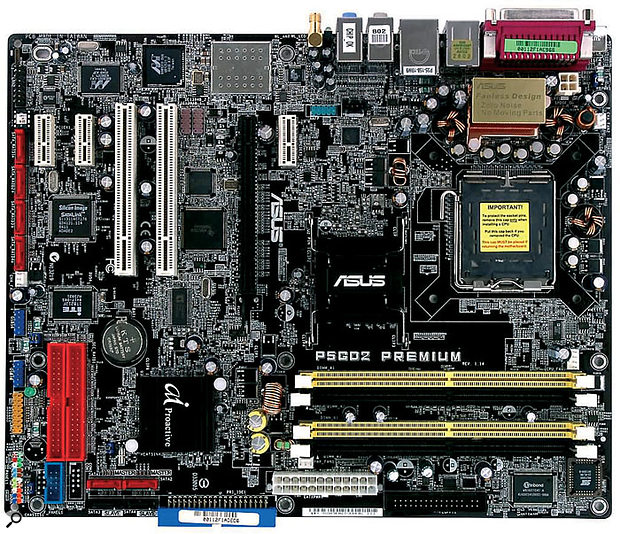 Judging by reports so far, musicians intending to buy or build an Intel-based PC with PCI Express slots may experience fewer problems, but should still specify the lowest-powered graphics card they can find to go with it. Such problems aren't confined to desktop PCs, either — even the latest Centrino laptops feature a PCI Express graphics interface, although the dedicated graphics interface fitted to most of them tends to be less powerful and therefore less likely to cause audio problems. For what it's worth, I didn't come across this issue with the Philip Rees PC I reviewed in SOS January 2005, which used an Asus P5GD2 Premium motherboard, Nvidia's 5300 graphics card and an Emu 1212M PCI soundcard.

The current issues might turn out to be curable via individual graphics-card driver updates — we just don't know yet. If, on the other hand, they're confirmed as a hardware design issue on certain motherboards, there's little musicians can do except take the drastic step of replacing them. Some musicians are hoping that it's a 'first generation' PCI Express design glitch that will disappear as motherboard manufacturers release new models, and are therefore biding their time before buying a new PC. Other musicians are expecting the situation with PCI Express to get worse before it gets better, and some who were about to upgrade anyway are buying or building new PCs featuring PCI slots only, before motherboards featuring them become scarce. Others have already abandoned PCI audio interfaces in favour of Firewire-based alternatives (although, as mentioned earlier, this still may not guarantee perfect results with PCI Express-equipped motherboards). Others are patiently waiting for PCI Express soundcards to appear and (we hope) bypass the problems.

Unfortunately, audio interface manufacturers seem to have, so far, collectively ignored PCI Express, in favour of Firewire and USB 1.1 and 2.0, with some still releasing new PCI-based cards, particularly at the budget end of the market. This is, perhaps, understandable: PCI is now a very mature and well understood technology, and there's also no denying the attractiveness of Firewire and USB interfaces that don't require you to open up your PC to install them. In addition, the number of musicians with PCI Express slots in their PCs (at the moment) must be relatively small. However, unlike PCI, PCI Express specifically supports time-dependent data transfers that are designed to guarantee that data arrives at its intended destination on time, which is ideal for real-time processes such as video and audio streaming. With this in mind, audio interface manufacturers ought to be falling over themselves to support PCI Express. I also suspect that some manufacturers must be secretly working on new PCI Express products, and if I can persuade some of them to reveal more I'll let you know.