As the Mac community looks to Pentium M-based Powerbooks to deliver high-performance, low-power mobile solutions, what if you can't wait until next year and need to purchase a Powerbook right now?

I have to confess to suffering something of a love-hate relationship with Powerbooks. I always regretted not buying a 15-inch Titanium model during its fashionable lifespan, and was eager to see what a successor would be. But at around the same time Apple offered the original 12- and 15-inch Aluminium models, Intel were introducing the Pentium M processor as part of their Centrino trio of mobile and wireless technologies for notebook computers, and it became clear that the 'Power' tag didn't mean quite so much as it had previously.

It was, therefore, a little disappointing when the 15-inch Aluminium model finally appeared: from an aesthetic point of view it was fatter, which also translated to slightly heavier; and the battery life also seemed a step down from the previously desirable Titanium models. With no Powerbook model that appealed to me, I found mobile bliss in IBM Thinkpads with Pentium M processors: great battery life, great performance — what's not to like? Well, ultimately, while it's an obvious conclusion, if you want to run Mac software, the Thinkpad isn't particularly practical; and if you need to have a laptop Mac right now and you can't wait for Pentium M-based Powerbooks, how desirable are the current Powerbook models?

This month I got the opportunity to find out, as I was away from my usual day-to-day regime, didn't have access to my Powermac G5 and ended up using a 12-inch Powerbook for Mac-specific tasks.

Have I Got Specs For You

The last revision to the Powerbook line-up came on 31st January this year. When discussing these then-new Powerbooks in May's Apple Notes, I concluded that Apple had compensated for offering relative few technical advances in power (either in processing or energy consumption) by instead providing more feature-rich Powerbooks that came loaded with almost all previously optional extras as standard. Indeed, for £1199 you can get a 12-inch Powerbook with a 1.5GHz G4 processor, 512MB 333MHz DDR memory, an 8x Superdrive, NVIDIA GeForce FX Go5200 graphics with 64MB of video memory, an 80GB 5400RPM hard drive, and Airport Extreme and Bluetooth 2 wireless connectivity.

Of these specifications, the 5400RPM hard drive in a 12-inch form-factor is a particular highlight, especially for those who want to record and play back a few tracks of audio, or maybe some samples, without always carrying around an external Firewire drive. The speedier drive also makes the system generally faster in areas such as boot time and virtual memory management. Anyone who's ever used a laptop with a 4200RPM drive (as in previous 12-inch Powerbook incarnations or iBooks) will attest that it can be a little frustrating.

The 8x Superdrive is capable of writing single-layer DVD-R and DVD+R discs at 8x, DVD-RW and DVD+RW discs at 4x, CD-Rs at 24x and CD-RWs at 10x. The supplied memory means that you can work quite happily without needing to purchase additional memory straight away in most cases (although the 12-inch PowerBook can be expanded to 1.25GB, and I'd definitely recommend the upgrade, given how cheap memory is these days). The 15- and 17-inch Powerbooks can be upgraded to 2GB RAM, so this may need to be factored into your Powerbook purchasing decision if you think even 1.25GB won't be enough.

Spec-wise, the only thing I think I really miss with the 12-inch is the Gigabit Ethernet port found on the 15- and 17-inch models, especially since Powerbooks are meant to be targeted towards professional applications. I can't say I honestly miss a Firewire 800 port on the 12-inch, which is the only Powerbook model to feature solely Firewire 400, instead of both 400 and 800 as offered in the 15- and 17-inch. The extra bandwidth might be useful if you use your Powerbook as a desktop replacement — but then you'd be unlikely to choose a 12-inch Powerbook in the first place.

As it is, I tend to use my 400 port for either an iPod or a Wiebetech Combo GB portable hard drive (www.wiebetech.com) that powers itself over the Firewire port and has an HGST 60GB 7200RPM 2.5-inch ATA drive. This is the perfect mobile companion, as it's amazingly light, and while it's not quite as fast as a 7200RPM desktop drive it's fast enough for streaming audio files. Another plus for the Wiebetech drive is that it features Firewire 400, 800 and USB connectivity and is supplied with a variety of cables to suit all situations. No Powerbook musician should be without one!

It's been another successful month for the iTunes Music Store, which celebrated the download of the half-billionth song in the middle of July. And to give some idea just how quickly songs are leaping off the digital shelf, when Apple released iTunes 4.9 at the end of June, the press release cited "over 430 million songs purchased and downloaded worldwide." Aside from fuelling even more downloads, iTunes 4.9 added a Podcast directory to make it easy to find and subscribe to Podcasts, audio broadcasts that are published on the Internet by companies and individuals alike (Podcasting has been likened to radio in this respect) and can be downloaded to your portable music player — which is to say, your iPod.

Speaking of the iPod, according to Apple's third-quarter results the company shipped 6,155,000 iPods in the quarter (compared to 1,182,000 Macs) ­ a 616 percent growth over the same quarter last year. And to ensure continued growth towards the all-important Chirstmas season, Apple 'simplified' (the company's word, not mine) the iPod line-up this month, by merging the iPod and iPod Photo models. What this means is that the previous iPod model with greyscale screen is no longer available and iPod Photo is effectively now just iPod — even the U2-branded iPod is now an iPod Photo underneath. The new iPod is available in 20GB or 60GB configurations for £209 and £299 respectively.

In terms of new hardware features, the current Powerbooks feature two additional 'patent-pending' technologies: a scrolling trackpad and a Sudden Motion Sensor. The scrolling trackpad enables you to scroll the current window by using two fingers on the trackpad simultaneously, instead of one, which turns out to be pretty handy, as it lets you scroll windows using far less finger movement than before, without having to move the pointer away from where you're working to access the scrollbar and back again. This behaviour can be adjusted in the Keyboard and Mouse System Preferences pane, where you can set the speed of scrolling, disable scrolling altogether, or disable only horizontal scrolling. While gesture-based trackpads are nothing new — Sony and IBM have had similar ideas — Apple's two-finger gestures are neat compared to the way in which the edges of a trackpad are assigned other behaviours in competitors' laptops. 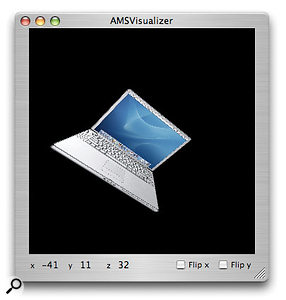 Amit Singh's AMS Visualiser is a cool, interesting, but ultimately pointless application (in the nicest possible way) that reads data from the Sudden Motion Sensor now featured in Apple's Powerbook and iBook laptops and displays the position and rotation of your computer in a 3D space.

The Sudden Motion Sensor (SMS, but sometimes referred to as AMS, for Apple Motion Sensor, or MMM, for Mobile Motion Module) is designed to detect strong vibrations, sudden changes in position or accelerated movement, such as when you move your Powerbook during normal operation, or if you were to drop it. Once the SMS has detected an anomaly in vibration, position or movement, it tells the Mac to park the heads of the hard drive to prevent damage, then resumes normal operation once everything has settled down again. This is obviously quite useful for day-to-day operations (a similar technology is featured in IBM's Thinkpad range), but the SMS can cause problems if you need to read and write large streams of data from your Powerbook's internal drive. Amit Singh offers an interesting page at www.kernelthread.com/software/ams/ describing the SMS and offering some applications to help illustrate how it works.

In use, the 12-inch Powerbook is a handy beast. I really appreciated the large internal hard drive when I started installing Logic Pro 7.1 and Final Cut Studio, and the built-in Superdrive is also neat. In terms of performance, it's pretty much identical to the 1.5GHz 15-inch G4 Powerbook I looked at in November 2004's Apple Notes. The 15-inch is a little bulky, and the 12-inch is marginally fatter, but there's still something seductive about the combination of the latter's feature-set and form factor.

Go Anywhere, Do Anything

No sooner had I finished looking at the 12-inch Powerbook than the web's modern equivalent to jungle drums started beating about an imminent iBook revision. While the rumours of a widescreen iBook proved to be incorrect at this time, Apple did release new iBooks, following the same strategy used for the current Powerbook line-up (ie. provide them with a rich feature-set). All the iBooks now feature 512MB PC2700 DDR memory as standard (which can be upgraded to 1.5GB), ATI Mobility Radeon 9550 graphics with 32MB of dedicated DDR memory, and built-in Airport Express and Bluetooth 2.0 wireless connectivity. The new iBooks also feature the scrolling trackpad and Sudden Motion Sensor. 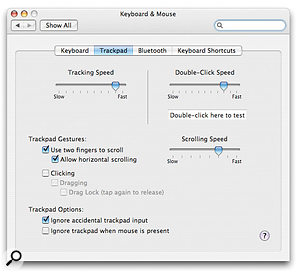 The scrolling trackpad gestures in new iBooks and Powerbooks can be configured in the Trackpad page of the Keyboard and Mouse System Preferences Pane.

There are now two standard iBook configurations available, starting with a 12-inch screen model for £699 that features a 1.33GHz G4 processor with a 133MHz system buss, a 40GB 4200RPM ATA hard drive, a Combo drive and the usual iBook interfaces: a 56k modem, 10/100 Ethernet, Firewire 400, two USB 2.0 ports, a video output and a headphone jack. The 14.1-inch model for £899 offers a 1.42GHz G4 processor, a 60GB 4200RPM ATA hard drive and an 8x Superdrive. In terms of pricing, these new iBooks are pretty good value for money, especially when you think back to the cost of iBooks a couple of years ago in the G3 era. Then again, Apple do now have to compete against aggressive pricing in the consumer and education markets from PC companies such as HP and Dell.

Those seeking a portable Mac for music and audio might be better off saving the pennies (or cents) for a 12-inch Powerbook. While the price difference between the 12-inch iBook and Powerbook is significant (over £300) for a few improvements that may seem minor, they are actually important improvements: a 167MHz system buss instead of 133MHz, a 1.5GHz processor over a 1.33GHz one, and a 5400RPM internal hard drive instead of a 4200RPM model. As I've mentioned before in Apple Notes, for me the 14.1-inch iBook doesn't really appeal because the screen offers the same resolution as the 12-inch (1024x768).

In addition to updating the iBook, Apple also revised the Mac Mini line-up on the same day, and there are now three models, all featuring 512MB memory as standard (the lack of this was a criticism when SOS reviewed the original Mac Mini in the May 2005 issue). They cost £359, £429 and £499 respectively. The upper two models feature built-in Airport Express and Bluetooth 2.0 as standard, and the top-end model offers a Superdrive instead of the Combo model included in the rest of the range.