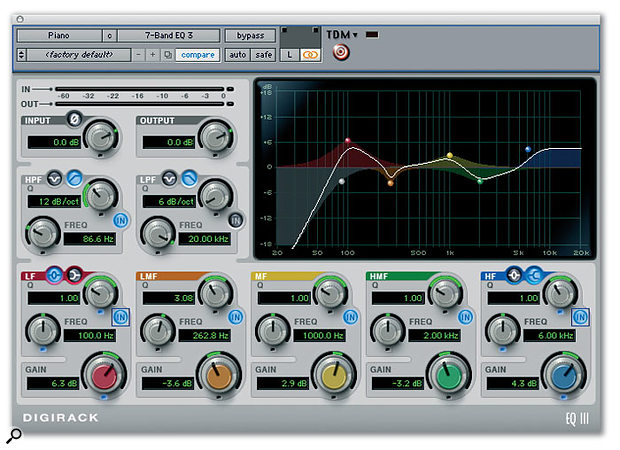 Digidesign's EQ III plug-in has been updated to fix a bug where settings were being incorrectly recalled.

It's update frenzy this month, as Digidesign deal with the move to Tiger and iron out more of the bugs in Pro Tools 6.9.

This month, Digidesign have been very busy releasing updates, the first set of which are for Pro Tools v6.9 on Mac OS 10.3.8 or Windows XP. First, the update to version 6.9cs1 for Pro Tools TDM fixed the following bugs:

Digidesign then announced a further update up to version 6.9cs2 for Pro Tools TDM, which fixed a bug with input gain on legacy peripherals attached to a 192 or 96 I/O. If you have a 192 I/O or 96 I/O, and the interface firmware version is 4.3, you need to run the Digitest firmware updater. If your 192 I/O or 96 I/O has firmware version 3.0, incorrect input gain on legacy peripherals will not occur, and you will not be able to update the firmware. This does not apply to the 96i, which does not have a legacy port. 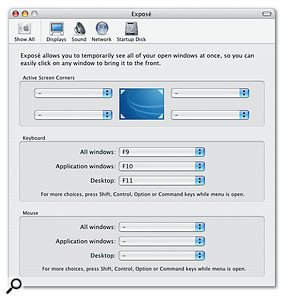 Some of the keyboard shortcuts in Pro Tools clash with the default controls for Mac OS 10.4's Expose features. The latter can be reassigned in the System Preferences window.

Also updated this month is the EQ III Digirack plug-in (shown above). The update fixes the problems with settings being incorrectly recalled which was mentioned last month. As usual, all the updates I've mentioned here are available from the Support/Downloads section of the Digidesign web site (www.digidesign.com/download/).

With Mac OS 10.3.9 (which isn't approved for use with Pro Tools) and 10.4, Apple report that some of their own applications might not open fully or at all if the Digidesign Core Audio driver has been installed. Instead of opening, an application's icon just bounces in the dock indefinitely, or a black triangle appears below the icon in the dock, but the application's windows and menus don't appear. The applications that may be affected are Quicktime Player, iTunes, iDVD, iMovie, Garage Band and Final Cut Express.

If this happens to you, Audio MIDI Setup can usually be used to work around the issue. Apple's recommended solution is to change the default audio device used by Core Audio as follows:

You should now be able to open all affected applications as expected.

Finally, Digidesign have pointed out an Audiosuite bug which affects Pro Tools v4 and above. When you try to use an Audiosuite plug-in on a region, you can you get a error message that reads 'This plug-in only processes 48 channels at a time. The current selection is not a multiple of that.' It was first thought to be a Waves plug-in issue, but then there have been reports that the Digirack EQ III causes a similar problem which Digidesign have confirmed. It can be avoided by closing the Audiosuite window after processing. It seems to only happen if you keep an Audiosuite window open between processes. They have added a further workaround, which is to change a parameter in the Audiosuite window before processing. They are continuing to look into this but, in the mean time, the safe advice is not to have more than one Audiosuite plug-in window open at any one time. 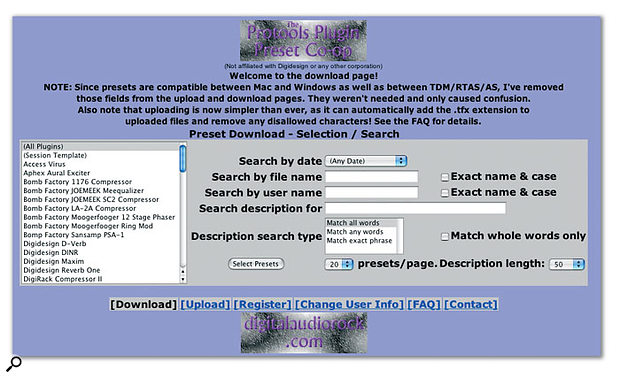 The Pro Tools Plug-in Preset Co-op allows Pro Tools users to share settings both for Digidesign's own plug-ins and third-party ones.

Finally I would like to draw your attention to a useful web site. It is The Pro Tools Plug-in Preset Co-op, which has been set up to allow Pro Tools users to share plug-in settings in the form of plug-in preset files which can be uploaded and downloaded. Preset files are categorised by plug-in, and can have a searchable description including what they are and how they can be used. It has been designed with extensive searching and selecting capabilities making it easy to find the sort of preset you're been looking for.