Audient are British manufacturers probably best known for their excellent ASP and ACS 8024 studio mixing consoles, as well as a host of very well‑designed analogue outboard equipment, including the Black Series modular signal processing rack, ASP510 surround monitor controller, Mico compact mic preamp, Sumo summing amplifier... and much more besides. All of these products boast solid, professional, high‑end performance, while also being attractively priced in comparison to their competition — so while they may not be affordable for everyone, they generally represent excellent value for money.

The most recent addition to the Audient fold is their Zen console. A simplistic description would be that the Zen is essentially a cut‑down ASP8024: it has lost all of the channel EQ, some of the auxiliaries, and (optionally) the mic preamp section too — but some DAW control facilities and moving‑fader automation have been added in. At a basic level, the Zen serves as a very competent, high‑quality external summing mixer, with all the monitoring control facilities you could possibly want, but if the optional mic‑preamp section is installed it can also make an excellent no‑frills tracking and recording console too. However, its real strength lies in the optional moving‑fader automation system, enabling fully automated analogue mixdowns within a sensible budget for the serious project studio.

It's worth noting that the fader‑automation package relies entirely on a DAW system to provide the fader data record/replay facilities, but since most studios use DAWs as the recording platform by default these days, this is actually a very efficient, cost‑effective method. While this approach means that the Zen also offers some simple DAW-control facilities, it's important to understand that it isn't a fully‑fledged DAW controller. It doesn't offer panning control, for example, and certainly isn't intended to replace the likes of a Mackie HUI or a Euphonix Mix: that's just not what it was designed to do. The DAW control features basically boil down to the moving‑fader and channel‑mute automation, and transport controls.

Also worth bearing in mind is that the Zen doesn't have USB or Firewire connectivity built in to integrate directly with your computer, and it includes no A‑D/D‑A converters for the channels: it's entirely analogue in that respect, and you'll still need an external multi-channel audio interface to hook the console up to the DAW. However, a master stereo output A‑D interface is available as another user option.

The Zen is a relatively compact, one‑size‑fits‑all, 16‑channel mixing desk. The channel, group and main faders are all 100mm designs, which (along with large illuminated Safe, Solo and Cut buttons) are mounted on a horizontal panel that includes a plush arm-rest, while the DAW transport controls are located to the right‑hand side. The bulk of the console's controls and metering is arranged on a steeply raked panel rising up behind the faders, making it very easy to see and reach everything. 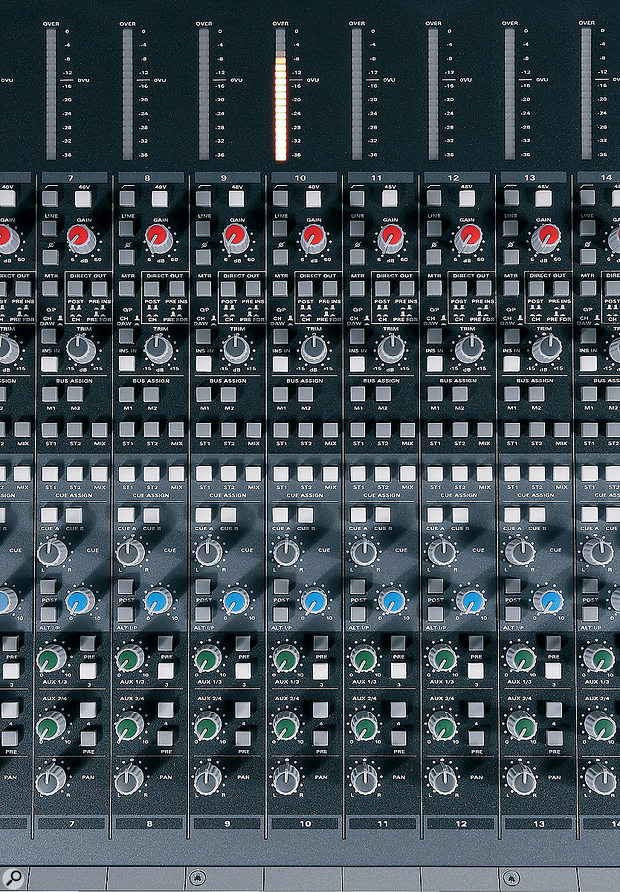 The array of push-buttons on each channel strip gives an indication of the extensive and flexible routing options of the Zen console.

Every input channel features two electronically balanced line inputs ('Line' and 'DAW', both presented as rear‑panel XLRs), and the architecture has the capability to run two separate signal paths through the channel if required, thus doubling the number of available mixdown channels. If the mic preamp option is installed at the top of the channel strip, under the channel bar‑graph metering (adding another XLR input socket and switches for phantom power, a 12dB/octave, 75Hz, high‑pass filter and polarity inversion, plus a 6‑60dB mic gain control), the mic input signal can be selected as an alternative to the line input. The mic preamp is identical to the excellent design used in the larger Audient consoles and outboard products. Each channel also boasts an impedance‑balanced insert send and separate, electronically balanced return (both on rear‑panel TRS sockets), with an 'insert active' button to enable outboard equalisers or compressors to be patched in when required.

In addition, every channel provides an electronically balanced direct output (with a very healthy 27dBu maximum output level), which is intended to feed the DAW when recording. A pair of push buttons allows four options for its source selection: direct from the Mic‑Line input stage; after the Mic‑Line/DAW selector switch and level-trim control (but pre‑insert); post‑insert point; or after the main fader and cut switch. There's considerable operational flexibility in these options, matching the versatility of many high-end consoles, with a variety of practical possibilities including ultra‑short signal paths, compressing 'to tape,' fader‑riding while recording, and so on.

The channel Solo button operation depends on the console's global configuration, and can serve as either a stereo after‑fade or mono pre‑fade listen, or as a true solo‑in‑place system. For the AFL/PFL modes, the pre‑ or post‑fade channel signal is sent to a separate monitor bus and auditioned independently of the main mix outputs, although a nice additional feature, called 'Solo‑in‑Front', allows you to blend a proportion of the main stereo mix in with the AFL/PFL signal, to allow it to be auditioned in context. If the console is configured for solo‑in‑place operation, the main mix bus is monitored all the time, and pressing the channel solo button leaves that channel unaffected while all the others are muted — and this 'destructive soloing' clearly does affect the main mix-bus outputs! Every channel also has a 'Safe' button which can be used to prevent the channel being muted when another channel is soloed, which allows reverb returns to still be heard, for example. Again, these are all typical high‑end console functions.

The 20‑segment bar‑graph meter at the top of the channel strip can be switched to show the signal level either after the mic‑line input stage or going to the direct output. It's worth noting that these bar‑graph meters are calibrated in digital style, with 0dB at the top and ‑38dB at the bottom. A 0VU mark at ‑14dBFS conforms to the EBU standard of 0dBu = ‑18dBFS (assuming that 0VU = +4dBu).

The channel input signal can be panned and distributed to any of two stereo groups, two mono groups, or the main stereo mix bus. It can also be routed to one of two stereo Cue buses and two mono aux sends (switchable to buses Aux 1 or 3 and 2 or 4, each send with its own pre-/post‑fader switching). The stereo cue signal is normally derived directly from the mic‑line input path and switchable pre‑ or post‑fader. Alternatively, it can be sourced from the DAW input instead, if required, and as the Cue send control can also be panned and routed to the two stereo groups and stereo mix bus, this provides the second mixdown path capability. As a result, the console can accommodate up to 32 inputs on mixdown and/or can be operated as a 'pseudo in‑line' console, with dual‑channel (mic‑line) and monitor (DAW‑Cue) signal paths in each channel strip. There's even an input 'flip' switch to swap the mic‑line and DAW inputs between the channel‑fader and cue signal paths.

The two mono groups are equipped with an impedance‑balanced insert send and electronically balanced return, but this time a 'Sum' button is included, which allows the return signal to be mixed (at unity gain) with the send signal, effectively adding yet another input for mixdown and, perhaps more usefully, making it very easy to set up parallel-compression configurations. An electronically balanced post‑fader group output (+27dBu maximum output level) is also provided on the rear panel. The mono group output can be routed and panned across the two stereo groups and main mix bus, and both stereo AFL and mono PFL facilities are provided, along with a bar‑graph meter monitoring the signal level feeding the buses. The two stereo groups have exactly the same facilities (albeit with stereo insert points), except that the output can only be routed to the main stereo mix bus (and rear‑panel post‑fade output sockets).

All four group faders have 10dB of gain in hand, like the channel faders, and the same solo and cut buttons, but lack the channel's solo‑safe buttons because they are immune from solo muting; it would be pointless muting the groups when soloing channels which may well be routed through the groups, of course!

The main stereo mix bus starts out much like the stereo group, with the same stereo insert‑point facilities and sum button (allowing the output of another external mixer to be introduced to expand the total number of mixed signals, if required). The signal is then routed to a stereo bus compressor, which is derived from the ASP8024 console's bus compressor. This has all the usual controls: threshold, ratio (from 1.2:1 up to 20:1), gain, attack and release (with an auto recovery mode), and a gain‑reduction bar-graph — but also a wet/dry control to enable instant parallel‑compression effects to be dialled up. It can also be bypassed, and its inputs and outputs are then made available directly on rear-panel connectors, enabling it to be patched into a stereo group or used for other external signal processing. The mix‑bus signal path continues from the bus compressor to the master output fader (calibrated with unity gain at the top) and then on to the actively balanced main outputs on the rear panel, as well as to the monitoring section and an optional A‑D card. This can generate sample rates of up to 96kHz (192kHz given a suitable external word clock) and output AES3 and both coaxial and Toslink S/PDIF formatted signals.