The Audix Cab Grabber is one of those good ideas that, in retrospect, seems so obvious that you wonder why no-one has thought of it before. Everyone who's ever placed a mic in front of a guitar amp will, I'm sure, have experienced the annoyance that mic stands can cause. Even the short ones take up lots of space, trip up unwary guitarists, and sag in the middle of your best takes. 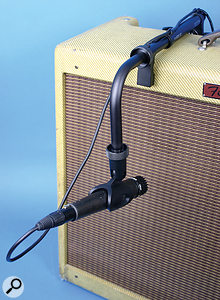 What the Cab Grabber does is eliminate the need for a conventional mic stand in situations where you want to place the mic close to the grille of a guitar cab — situations which, let's face it, crop up pretty often, especially in a live context. In essence, it's a very simple device, consisting of a right-angled metal tube terminating in a standard 5/8-inch mic thread. The barrel to which this tube is attached is extendable and powerfully sprung, with padded brackets at either end. To attach it to a cabinet, all you do is pull hard until the brackets are further apart than the depth of the cab, position it in a convenient place on the top or to the side, and let go. The Cab Grabber then does exactly what the name suggests, holding the cab in a very firm grip (so firm, in fact, that I probably wouldn't use it on a really valuable vintage amp, for fear of marking the Tolex). A large thumbwheel rotates up the thread to meet whatever mic clip you attach to the Cab Grabber, allowing you to fix it in place in a pleasingly solid fashion. A second, at the point where the right-angled tube meets the barrel, allows the tube to be rotated to find the optimum position.

With a standard plastic clip like the ones that come as standard with SM57s, this allows the mic to project about seven inches in from the edge of the cab, which is sufficient for most purposes. Any adjustment of the mic's angle and distance from the speaker must be done by angling the clip itself and moving the mic forwards or backwards within it. It's obviously not as flexible as using a conventional stand, but that's not really the point: the Cab Grabber's raison d'être is to make basic close miking possible without a stand, and that's exactly what it does. (I asked Audix why they'd used a simple metal tube rather than a gooseneck, and they told me they'd been unable to find a gooseneck that would not eventually sag.) I didn't have noticeable problems with mechanical transmission of vibration through the barrel to the mic clip, but you could used one of Rycote's clever Invision clips if that is a concern.

I was a little disappointed to find that I couldn't use the Cab Grabber with my Fender Vibrochamp — it requires a minimum depth of nine inches or so — but it coped perfectly with the larger cabs I tried. At the other end of the scale, I contemplated using it to attach a mic to a kick drum, but it wouldn't quite stretch far enough. However, it does the job it's designed to do very well, and I can imagine the Cab Grabber (£57.50$69) becoming a Godsend for engineers in live venues and studios alike. Sam Inglis

The Cab Grabber is a compact and useful cabinet-mounted mic stand for electric guitar, that is specifically intended for close-miking applications.