Back in the day (October 2012, to be precise) I waxed lyrical about Sample Modeling's solo wind instruments. I'm pleased to say the company are still going strong, though there was a bit of a hiccup in 2017 when a split in the ranks led to the formation of a breakaway outfit, cunningly titled Audio Modeling. A minor legal kerfuffle ensued (details in the box below) and an amicable resolution finally reached: Audio Modeling began selling their own products, adding new instruments to the SWAM range which caught the ear of SOS's editorial team at a recent NAMM show. It now falls to your intrepid reviewer to investigate further... 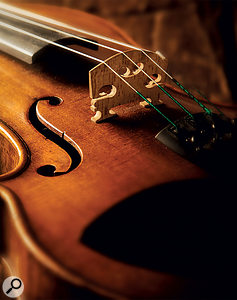 For those who enjoy bewildering acronyms, SWAM stands for Synchronous Waves Acoustic Modelling, a proprietary technology conceived by Stefano Lucato and developed by Emanuele Parravicini. Without getting too technical, it's optimised for acoustic instruments which require continuous control of performance techniques — a violinist gliding from pitch to pitch, a variable-speed clarinet trill, or a flautist gradually introducing vibrato while swelling the volume of a note. Because such mobile articulations are hard to pin down with fixed samples, SWAM introduces physical modelling (note correct spelling) to accurately mimic instruments' real-life behaviour.

The SWAM sound engine runs as a VST, AU or AAX instrument plug-in on PC and Mac systems (see the 'System Requirements' box below). It has no stand-alone version, so if you want to run it outside of your DAW you'll need a separate VST or AU host. If you plan to use it on stage, it's worth noting that Audio Modeling have developed their own Camelot host with live performance in mind. The player software (supplied free when you buy an instrument) comes in two flavours: SWAM-W for woodwinds, and SWAM-S for bowed strings. We'll take a look at Audio Modeling's current range, which divides neatly between those two solo instrument groups. 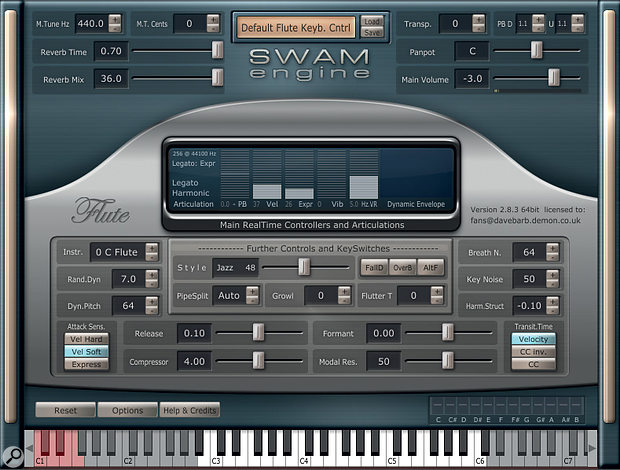 The main page of the SWAM Flute interface.

Rather than giving users dozens of patches to wade through, the makers opted for a single all-in-one instrument containing all possible stylistic and timbral options. Thus, the Flute's 'Style' slider allows you to run the gamut from 'classical' (featuring a pure-sounding, restrained attack) to 'ethnic', whose spitty, octave–overtone note fronts are reminiscent of a Japanese shakuhachi. Between these two extremes are the 'jazz' and 'funk' styles, the first of which has enough attack definition for most purposes and thus serves as an ideal default setting.

I was immediately bowled over by the flute's sheer playability and lovely full, lyrical tone, prompting an extended improvisation which threatened to go on for hours. Noting the ecstatic stream of notes emanating from my music room, my partner wandered in and remarked that although it sounded very nice, it lacked the breathy quality she was expecting. This was easily fixed by increasing the 'breath noise intensity' setting on the interface, after which the flute sound met with unanimous approval from both parties.

Moving on, though its top few stratospherically high notes are of limited musical value beyond entertaining the bat population, I also enjoyed the piccolo, which manages to sound suitably bright and piping while avoiding the hollow, wispy sound in the bottom octave I associate with the real thing. Always delectable in the low notes below Middle C, the alto flute's lyrical higher notes are a good alternative to the main flute for sylvan melodies. The bass flute (an orchestral rarity) sounds sultry and velvety — it contributes its usual fabulous low notes while keeping heart in the higher register, helping to make this flute collection a versatile and musically pleasing package.

I was immediately bowled over by the flute's sheer playability and lovely full, lyrical tone, prompting an extended improvisation which threatened to go on for hours.

I was hoping that the SWAM Clarinet would follow the Flute's example and include the entire clarinet family, but here the only extra instrument is a bass clarinet. While the extremely high upper notes of the main instrument arguably obviate the need for a smaller, high-pitched Eb clarinet, I would like to have seen contrabass clarinet included, if only for its stupendous bass notes. That said, neither are standard orchestral items and this bass clarinet extends five semitones lower than the real thing, so I suppose I shouldn't grumble. 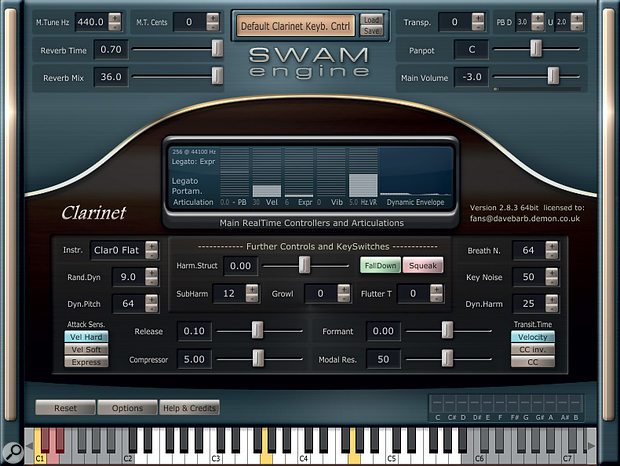 The main clarinet is exceptionally playable, combining a mellifluous rounded tone with a wonderfully liquid delivery: its Vienna-style legato mode (more on which later) works a treat for fast lines, trills and Middle Eastern gracings. The bass clarinet is equally engaging, boasting a fat, rich timbre and a great low register ideally suited for oily, villainous bass lines. Unlike the flute, clarinets can bend notes — the SWAM instrument's glissando range spans a generous 18 semitones, so by strategically inserting an intermediate note at the midway point, you can play the iconic, slow ascending G3-C6 slide heard at the front of Gershwin's 'Rhapsody in Blue'.

Though orchestral clarinet parts are usually played straight, a little vibrato is essential for jazz and folk styles. This instrument's vibrato sounds admirably authentic, but if you want to sound like Acker Bilk (showing my age there), you can adjust its rate to a higher setting. My only small criticism is that I occasionally found the clarinet's key noise a little intrusive, but fortunately you can reduce its volume or turn it off altogether on the interface.

The staple orchestral woodwinds oboe, English horn (that's cor anglais to you and me), bassoon and contrabassoon rub shoulders in Audio Modeling's SWAM Double Reeds package. I initially found the oboe to be a tad more synthetic-sounding than the flute and clarinet, though once I'd adjusted my touch, established a workable dynamic level (via my expression pedal) and added a touch of vibrato, that reservation disappeared.

Tonally, I preferred some of the oboe and English horn's alternative instrument timbres to the default setting, though admittedly the difference is pretty subtle. Both instruments share the clarinet's liquid, fleet-footed legato response, though I did notice intermittent small clicks on descending wide legato intervals for which I couldn't find an immediate cure. The bassoon is top notch, a superb, eloquent instrument, and its big brother contrabassoon (which descends to a stentorian low A0) is surprisingly playable and lyrical in its high register. 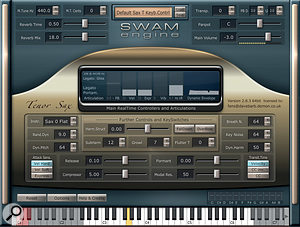 Where it all started: the Tenor Sax, originally released in the Kontakt format (now discontinued), has been spiffed up in the proprietary SWAM format. SWAM Saxophones also includes alto, baritone and soprano saxes.The discontinuation of The Sax Brothers Kontakt library in May 2018 saw Audio Modeling's saxophone family happily reunited as fully fledged SWAM instruments. Although technically different beasts from the earlier Kontakt versions, users need not worry about any adverse musical changes: rest assured that these saxes sound as good as ever, and now benefit from new features such as overblow, temperament (which introduces a controllable degree of upward or downward stretch tuning) and custom microtuning (essential for those who work in non-Western scales).

As mentioned before, the saxes' big selling point is the smooth, fluid quality of their melody lines — frankly, I've heard nothing to beat it. For the alto, tenor and baritone instruments, I refer you to my October 2012 Sound On Sound review, written at a time when they were Sample Modeling products. The compliments flow thick and fast ('ultra-real-sounding', 'tremendously expressive', 'the degree of control is astounding'), and I stand by every word.

Arguably, the soprano sax is the most playable and authentic of the quartet: tonally superlative, it displays fine transitions between attack and sustain, a lilting vibrato and a superb, lyrical legato delivery for all styles of music. Excellent and utterly convincing. With this collection, you'll be on safe ground creating anything from a realistic jazz big-band arrangement to soul/funk/Tamla booting sax parts, and if you need an old school, smoochy late–night R&B sax solo, these instruments are just the ticket.

The success (or otherwise) of a solo virtual instrument rests heavily on two factors: integrity and versatility of note attacks, and fluidity of legato performances. SWAM solo woodwinds score maximum points on both counts — their attacks (determined by playing velocity) range from breathy, tender puffs to emphatic, spitty stabs, and the inter-note legato transitions are as smooth and natural as any I've heard.

On the latter front, I was pleased to see that Audio Modeling's legatos follow the VSL prototype, wherein held notes automatically re-sound when a superimposed note is released. This makes it easy to play realistic trills and grace notes, opening up a world of decorative folk music performance styles. Another advantage is that legato intervals continue up beyond the industry-standard 12 semitones — I would however advise against attempting 15-semitone woodwind trills, otherwise your bandmates will think you've gone mad.

Other useful performance features include keyswitchable falls you can throw in at the end of a phrase, overblow, growl and the perennial flutter tongue delivery, beloved of the classical avant-garde fraternity (all 150 of them), orchestral sample library makers and composers of amusing cartoon music. Along with breath and key noise, these articulations are all displayed on the GUI main page and can be controlled by MIDI CC's.