Audio-Technica's new AT2020 is unashamedly a 'no frills' mic, with basic standmount and a soft zip-up vinyl case. The polar pattern is a fixed cardioid, and there are no switches for pads or filters. Slightly smaller than Audio-technica's other side-entry vocal mics, the casing contains a 16mm-diameter back-electret capsule, which is slightly smaller than the usual one-inch-diameter capsules adopted by most microphone designs of this type. It's a mistake to imagine that smaller diaphragms equate to a less warm or solid sound, though, and this model offers plenty of bass extension, with a full 20Hz-20kHz bandwidth with only a slight dip centred around 70Hz and a very gentle presence hump between 5kHz and 15kHz. It's also wrong to think of back-electret capsules as somehow being second-class citizens, as many top measurement mics are back-electrets, for example. 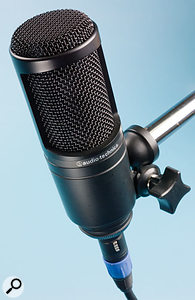 This microphone is extremely solid, weighing in at 12.1oz — so solid in fact that I couldn't find a way into it to take a peek at the electronics! The cast metal is quite thick and chunky, and a tough wire mesh protects and screens the capsule. A secondary layer of finer mesh helps reduce popping but, as always, you should still use a proper external pop shield when recording vocals. The open-circuit sensitivity of the mic is 14.1mV/Pa, which is comparable with other studio vocal mics, though the quoted noise figure is just slightly on the high side of average at 20dB. The maximum SPL is a hefty 144dBSPL at 1kHz for one percent THD, so there's no worry about very loud sounds such as close-miked horns. This equates to a dynamic range of 124dB at 1kHz and maximum SPL. Phantom power is required, and there are no battery options.

Despite its low cost, this mic actually delivers a very mature, believable sound both on vocals and on instruments. As a vocal mic, it displays the kind of lower mid-range warmth that flatters most singers, and combines this with a very subtle presence peak that adds 'air' and clarity without erring on the side of sibilance or harshness. Because the mic doesn't hype the character of the original sound too much, it's more likely to work well with a wide range of singers. Although the noise figure isn't brilliant by today's standards, noise isn't an issue when close-miking voices or instruments. I don't for a moment imagine that Audio-Technica would recommend this mic for recording classical instruments from several metres away, but you might still get away with it if the performance is reasonably loud.

Tested on acoustic guitar, the mic immediately gave a well-balanced sound, and it was very easy to find a sweet spot where the acoustic sound of the guitar resembled the miked sound. There's plenty of depth and clarity, but without that scratchy honkiness that some mics seem to lean towards. I was also impressed with the off-axis characteristics of this mic, with its exceptionally good rear-axis rejection and good rejection of sounds arriving from 90 degrees off axis. This could be good news when working in studios with computers, as keeping the computer noise out of the microphones can be a major headache.

As a low-cost, general-purpose capacitor microphone, the AT2020 is hard to fault other than on account of its noise level. I particularly liked the well-balanced sound this microphone produced, both on voice and on acoustic guitar. It's also a pity the mic doesn't come with a shockmount, but I can understand that Audio-Technica wanted to keep the price as keen as possible, and the included standmount works fine.

Clearly Audio-Technica aren't without some stiff competition, but they have a reputation for good engineering and good-sounding mics, and a bit of reputation goes a long way when you're trying to choose between similarly priced microphones. The AT2020 is built to the same standard as Audio-Technica's more up-market microphones, and I certainly have no complaints about its subjective sound quality. Indeed, for some applications in turns in better results than microphones costing several times its UK price, so it probably doesn't take a crystal ball to predict that Audio-Technica will sell a lot of these over the coming months.

This is a great-sounding little mic that can deliver very professional results in just about any home-studio miking application.