Audio-Technica's latest 'pencil' mic is designed to provide a high-frequency boost. Could this help lift sources out of a busy mix? 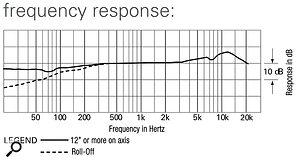 Introduced in 2011, Audio-Technica's AT2031 small-diaphragm, cardioid condenser mic is optimised for use with stringed instruments (both bowed and plucked) and piano. It's designed to provide a subtle high-frequency lift that will bring out articulation and detail and, like pretty much all Audio-Technica mics, it's a back-electret design.

Constructionally, the AT2031 looks much like other Audio-Technica 'stick' mics: beautifully engineered, with unfussy styling and a satin-black finish. The weight is a reassuring but not excessive 134g, and the mic's body is 143mm long and 21mm in diameter. A single switch, recessed into the side of the mic body, applies a gentle 150Hz, 6dB/octave low-cut filter, which may be useful in attenuating unnecessary low frequencies, or moderating the proximity effect when the mic is used close to the source.

Connection is via a conventionally wired three-pin XLR, and 48V phantom power is required for operation. The mic is supplied with an AT8405a stand clamp, a foam windscreen and a soft plastic storage pouch. 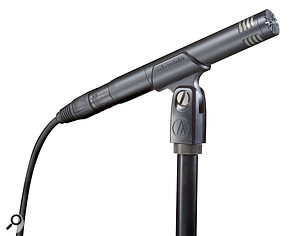 The AT2031 has a reasonably low noise floor (EIN 17dB), enabling it to cope with quieter instruments. Having said that, it can also handle SPLs as high as 141dB. Its open-circuit sensitivity is -34dB, or 19.9mv (ref 1V at 1Pa), which is not untypical for this type of microphone.

The frequency response is quoted as extending from 20Hz to 20kHz, but this tells us very little about the mic's tonality. Indeed, the majority of capacitor mics claim the same figure, and many sound noticeably different, due to small dips and bumps along the frequency axis. A response plot printed in the manual is more informative, showing a gentle lift above 3kHz and a sizeable presence peak (about +7dB, judging by the plot) centred around 12kHz. This is above the region where such a hefty boost would sound harsh, so it should contribute more of a sense of airiness. The off-axis response is nominally consistent up to 60 degrees off-axis, after which the high end drops away more rapidly than the low end, which is typical of cardioid mics.

I put the mic up alongside a similarly priced Rode NT55 as a point of comparison, as I'm very familiar with the sound of that mic. The NT55 has less of a high lift so, quite predictably, the AT2031 had a brighter overall sound, although the Rode, being a little more sensitive, needed less preamp gain. On acoustic guitar, both mics delivered a perfectly usable sound, with the AT2031 adding some high-end gloss that would be particularly welcome when trying to place the part in a mix. There's evidently some musical flattery going on with the AT2031: although the overall sound was believable, the solid lows were balanced by pleasantly shimmery highs.

On hand percussion, both mics produced fine results again, with the AT pulling out more definition and detail — so there's no reason to believe that it wouldn't also make a fine drum overhead mic. Neither mic would be my first choice for recording electric guitar, but miking my combo from around 300mm, midway between the centre and edge of the speaker, produced surprisingly good results. The warmer sound of the NT55 was more to my taste, whereas the AT2031 delivered a creditable American rock sound, with its characteristic bite and edge. A little EQ tamed it nicely, to my ears, so I could work happily with it.

The AT2031 has clearly been designed to impart a definite tonal character, with a brighter and more detailed high end, and it achieves this without adding harshness or stridency. Because it has such a strong character, it won't suit every application, but where high-frequency detail and a lively transient response are needed, it does a great job of adding a touch of gloss. It's also very well made and affordably priced, so what's not to like?

The alternatives may have different tonalities, because of the shape and extent of their respective presence peaks, but the Rode NT55 and the SE Electronics SE1A are probably the closest in terms of price and performance.

The AT2031 is a useful microphone for those occasions when an instrument needs a little larger-than-life sparkle to help it cut through a mix. Audio-Technica have managed this really well by keeping most of the presence boost above those areas of the spectrum that can cause harshness.