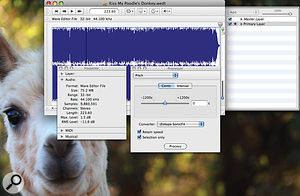 Wave Editor's main waveform display, with layer control in a pop‑out tab, and Inspector and Processor windows. Other useful Processor options include Normalise, Dither and Remove DC Offset. The alpaca is not included.

This morning in the supermarket I bought myself a pack of deluxe clothes pegs. I think it was a good buy at £2.99 for 12. Even when I'm a bit short of the readies, my theory is that it's better to splurge on really nice clothes pegs and, if necessary, economise on the expensive things in life to make up for it.

It's the same with audio gear. Save just a smidgeon on those D-A converters and you can afford some nice software stocking‑fillers. Wave Editor by Audiofile Engineering is a good example. At $79, it's not a trivial purchase, especially if you've already got all its functions in Pro Tools. And anyway, you can get free programs which do more or less the same thing — Audacity, for example. But Audacity is the ordinary clothes peg, while at the other extreme Pro Tools is the executive dry‑cleaning service. The deluxe clothes peg is Wave Editor.

So what's the advantage of the deluxe clothes peg over your DAW? Well, a specialised stereo editing program, if it's any good, will start up faster, run on smaller machines (useful on the road), and offer just the right tools for a quick editing job without the so‑beautiful‑I‑could‑eat‑them interfaces for synths, sequencers and kitchen sinks all screaming for your attention at the same time.

Alternatives to Wave Editor for the Macintosh include BIAS Peak Pro 6 (reviewed in January's Sound On Sound: /sos/jan09/articles/peak6.htm), DSP Quattro (SOS April 2003: /sos/apr03/articles/i3dspquattro.asp) and Rogue Amoeba's Fission (www.rogueamoeba.com). Fission is probably the best alternative for comparison, because it's cheap as chips at $32, although it has significantly fewer functions than Wave Editor. The freeware Audacity (http://audacity.sourceforge.net) is, in my view, clunk city in the user‑interface department, so let's reserve that for the really poverty‑stricken.

For me, the most important fact about any program is whether I can use it without reading the manual. If I have to read the manual, well, then, Wave Editor's manual is terrific, much better than most. But I still don't want to read it. So can I use Wave Editor just by playing, not reading? Yes. But only just. There are a few oddities and gotchas. One you'd better know about is that dragging a file onto the program icon, or using 'Open...' in the File menu, will not open sound files in most of the formats that Wave Editor supports. What? This is an audio editor. What do you mean it won't open sound files? The answer is that to open sound files in most of the supported formats you have to use the 'Import...' command. This opens files in pretty much any sound format, using the Mac's built‑in QuickTime for anything Wave Editor doesn't know how to process itself. Mono, stereo and all the commonly used surround sound formats are supported, and I'm pleased to say that the user‑interface infelicity I've described above will be fixed in the forthcoming version 1.4.5 of Wave Editor, which should be current by the time you read this.

Wave Editor looks simple when you first open it up. But like a good mid-fielder, its apparent straightforwardness hides a wealth of skills. These include a variety of basic sound‑processing options for when you haven't got the big‑gun programs to hand, and a huge range of useful features, such as the ability to set the tags in your MP3 files (and in many other types of files, some of which I didn't realise even had tags).

So what can you do with this thing? Well, it does more or less what you expect, with the emphasis on more rather than less. The main window shows your waveform. In theory, you can have any number of channels, and certainly 5.1 surround sound is handled well. You can layer waveforms, and save the layers in a proprietary file format to work on later — again, an obvious move for a DAW, but something that other mere editors can't do. You can apply effects in real time. You can monitor your peaks using peak‑hold level meters, a left‑right stereograph, and a spectrograph... or all three, which is more fun than watching the hippy visualisations in iTunes. 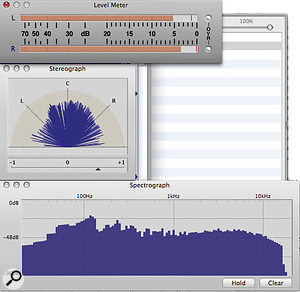 Control is exceptionally easy. Just for example, you can zoom in on the waveform using little zoom bars that are right there in the main waveform window, looking at you all the time. More importantly, Wave Edit makes it easy to do non‑destructive editing, thanks to a wide variety of ways of working with layers and other non‑destructive tools such as smart region labels that save their own effects settings. And there's a whole army of position‑finding labels to keep you sane: plain green Markers, orange Slices, red Regions, blue Loops, and black‑and‑yellow‑striped CD Tracks/Indices. Labels are kept separately for your various layers, and there are tooltips and snap‑back to your favourite places. There are also Handles and Grids... why does this remind me of American football?

If you're not a mousey person, you can use your computer keyboard. Wave Editor comes with its own panels for setting keyboard shortcuts and to tell it what to do when you scroll the wheel on your mouse, and a pop‑up panel that reminds you what other mouse actions do, although these mouse actions are not all configurable. I don't know why they don't use the Macintosh operating system's built‑in keyboard configurator. It's usually a worry when a software company start doing things their own way rather than using the facilities the operating system provides, but in this case I can't see any harm arising, and it's nice to be able to get at keyboard shortcuts easily from Wave Editor's menus without having to go all the way to System Preferences. The options for mouse control are impressive: there are lots of them, and they seem well chosen. 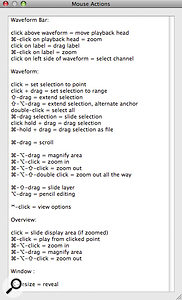 Wave Editor's very comprehensive list of mouse actions.For example, you can Command‑Option‑drag over a section of waveform, and without having to choose any menu commands or any hard work like that, the selection you've chosen will be expanded to fill the window. Nice.

What else can you do? Not much compared to a DAW, but still a hell of a lot. You can move bits of audio around, of course. You can record new audio. You can play back using a sophisticated transport bar with pre‑roll and post‑roll monitoring, with your audio sync'ed to a MIDI track. You can generate a few simple noises internally, including white and pink noise. You can locate peaks in more ways than I've had hot dinners. And you can apply the following transformations: change gain, normalise, invert phase, speed change, pitch shift, reverse audio, remove DC offset (that's thoughtful), fade (segmented linear, quadratic or Bezier), compress (called 'Thresholds'), and resample to change bit depth or dither, using Apple's built‑in algorithms or the proprietary Izotope resampler.

And that's just the built‑in effects. You can also apply any Audio Units or VST plug‑in, a simple phrase that describes so much joy.

Did You Leave The Handbrake On?

Wave Editor is touted as being optimised for speed, as you'd hope that something so streamlined would be. I tried it on a recent desktop with a dual‑core 2.66GHz processor, and also on an old G4, both with plenty of memory. Here are the times for encoding and decoding a 70MB MP3 file (80 minutes of stereo at 128kbps, VBR encoding), compared to competitor program Fission by Rogue Amoeba. If you don't want to read the table below, I can summarise it for you: encoding and decoding using Wave Editor is slow, slow, slow.

I made myself quite a few snacks waiting for Wave Editor to do its thing, I can tell you. Loading files in uncompressed formats such as WAV and AIFF is nothing like as glacial as these times, but it's still a little slow compared to the whizzy Fission. I believe that Fission doesn't do a separate decoding step: it manipulates the audio data in whatever format it finds it in. Perhaps this gives it an unfair advantage over Wave Editor, which converts data into its own uncompressed 32‑bit format. However, as end users we shouldn't have to care about this stuff. No matter why Fission is faster, it just is.

Wave Editor uses the freeware LAME package to do its MP3 work for it, and doesn't add any appreciable overhead to the time it takes for LAME to do its thing. So on the one hand there's nothing wrong with the competence of Wave Editor's programmers; but on the other hand, bringing Wave Editor up to the speed of Fission won't be easy. Back on the first hand, though (can I do that?) Fission doesn't have the wealth of editing features that Wave Editor does. So you takes your choice: incredible speed (Fission) or incredible features (Wave Editor).

Wave Editor is a nice package, with an amazing abundance of options for an editing‑only program, and an exceptionally well thought‑out user interface that puts the options where they're needed, not in your face. I only have one worry: am I really going to use such nice editing facilities if it's a hassle to save my work because it's too slow? That depends largely on whether I need to use compressed audio files. If not, this is a neat package that fits the bill when you want an editor that's simple, but not too simple. 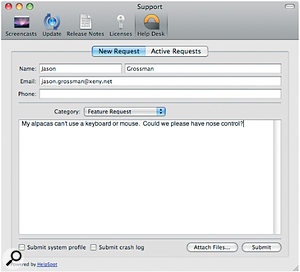 Wave Editor positively encourages you to submit requests for help, or for new features.

Maybe the best thing about this product, and certainly the thing that impressed me the most, is the technical support. First of all, the manual is fantastic. Yes, I know I said I don't like to read manuals. That's partly because I'm lazy and partly because most manuals suck. But this one is a joy. It describes everything, and manages to do it without being boring. It even includes short examples of things you might want to do.

And in addition to all the help that comes with the program, there's another type of support: the program positively encourages you to ask the company's tech staff for help using a built‑in support window. That's pretty amazing for something priced basically as a stocking‑filler.

Wave Editor is a terrific program for anyone who needs a specialised audio editor. It's easier to use than a DAW, not just because it's got a simpler job to do but also because it's beautifully designed for straightforward editing.