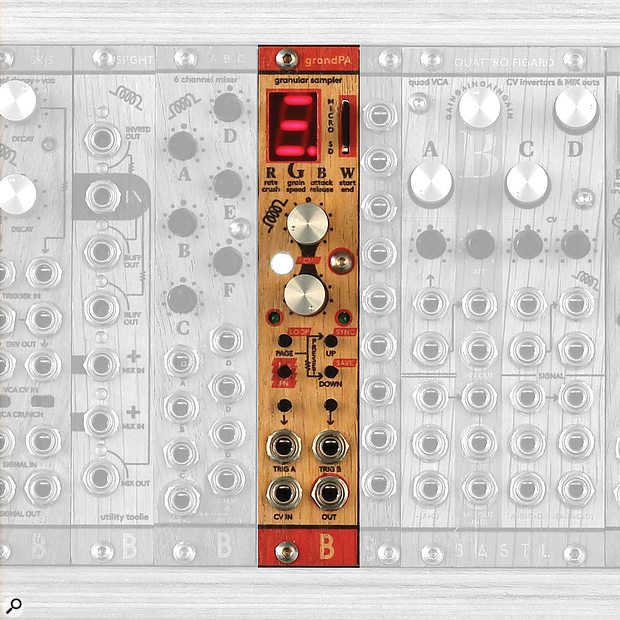 It’s not so long ago that I was gushing over Bastl Instruments’ Microgranny 2, a monophonic granular sampler utilising a MicroSD card as the foundation for recording and manipulating samples, even long ones. It was no surprise to learn there were many requests to rebuild this cute, tabletop box into Eurorack form, and the Grandpa is the result.

I should start by pointing out that, despite the manual’s description of the Grandpa as a granular sampler, it doesn’t actually sample. Samples are read from a card, but in this hardware incarnation there’s no option but to prepare them offline then port them across using a card reader. The samples should be 22,050Hz, 16-bit and mono, although higher sample rates of up to 44,100Hz are accepted.

Having already assembled a varied bunch of samples for the Microgranny 2, I processed a couple more, mainly for the pleasure of introducing some hour-long field recordings and ambient soundscapes into my modular. Given the size of the Grandpa’s display (which can show a single character or a simplifed representation of parameter values) the P0-9 and PA-PZ (WAV) naming standard makes perfect sense. The only extra information offered is a dot that appears whenever a sample is playing at its original rate, when grain scanning is static and other useful situations. A simple key combination instructs the module to reboot and recognise any new samples you may have copied to card, thus avoiding any need to cycle the power.

Having primed the Grandpa with your favourite drum hits, effects, voice captures and even complete backing tracks, you’re presented with an interface that looks like it could be cryptic, but fortunately it’s dead easy to get around. However, there’s no denying this is also a strange-looking beast that doesn’t particularly exude quality. The two knobs and front panel are made of wood and I can’t see how this adds anything to its appeal, especially as the knobs are slightly wobbly. Apparently Bastl are working on metal alternatives, so yay to that!

There are six tiny buttons — and I mean tiny! Fortunately, button combinations to save presets, set a sample looping and sync the granular process to incoming triggers are clearly labelled on the wooden background. The Grandpa has 35 presets — the same number of samples it can address. This is no coincidence: it’s the sum of the display’s alphabetic and numeric characters.

A preset keeps track of the two samples it uses, plus all their parameter values which are set in the four available pages. Repeatedly pressing the Page button toggles an LED through red, green, blue and white. You don’t have to remember what these colours mean either because the panel indicates the parameters for knobby control on each page. Thus, when the LED is red you can tweak Sample Rate and Bit Crush; when green, you’re digging into granular processing, ie. grain size and the speed at which the grains are scanned (either forwards or backwards). The final two colours respectively offer a simple attack and release envelope, and control over sample start and end. Set the envelope to its maximum release and it will act like a hold key.

As you can see, this is quite a lot of sample control from a minimal interface, but strangely enough, it works. Partly, this is due to the implementation of a knob ‘pass-thru’ mode — you must always go past the values stored in the preset before either knob wakes up. This behaviour applies to both samples in a preset, with the tweaks you make always applied to the last sample triggered.

There’s a lot of pleasure to be had from carving up samples into grains and shunting them around and here there’s no interpolation or smoothing between grain jumps. The process therefore generates all manner of clicks and other glitches, hence a bit of filtering can often be desirable. Filtering also helps the bit-crushing process considerably. I’ve rarely used ‘Crush’ in my Microgranny 2 but somehow it has far more appeal in a modular context where so many processors are ready to sweeten or twist the output. This bit-crusher is as dirty and abrasive as ever but it can be exactly what you need to give percussion and drum loops extra bite.

The single CV input (0-10 V) can be assigned to any parameter, with the assignment stored in a preset as you’d expect. Setting it up is a simple process of navigating to the desired page then turning the relevant control while pressing the Function button. While I’d love to have had more CV inputs, the option to externally control sample start, rate, grain size, etc, is pretty darn wonderful.

The Grandpa is monophonic, so only a single sample can play at once, triggered either manually or via the trigger inputs. Interestingly, the audio output is DC-coupled (0-5 V), giving you the opportunity to use the module as a CV source, perhaps with long-running, complex waveforms stored as WAV files.

I originally wondered if having only 35 samples might be a drawback, but it hasn’t worked out that way. The supplied 4GB card still has loads of space even though I’ve added several samples of over an hour and many others of around the 20 minute mark. Given that it offers control over the start and end of each sample, it’s an awesome resource and ever-ready to cough up whatever audio you like and subject it to lo-fi granular mischief! There are cleaner sample players out there and others with more functionality too, but for the money Grandpa takes the biscuit (and probably the humbugs and vintage port). My love continues undiminished for the Microgranny 2 but the Grandpa is equally cool and useful, just in a slightly different way.