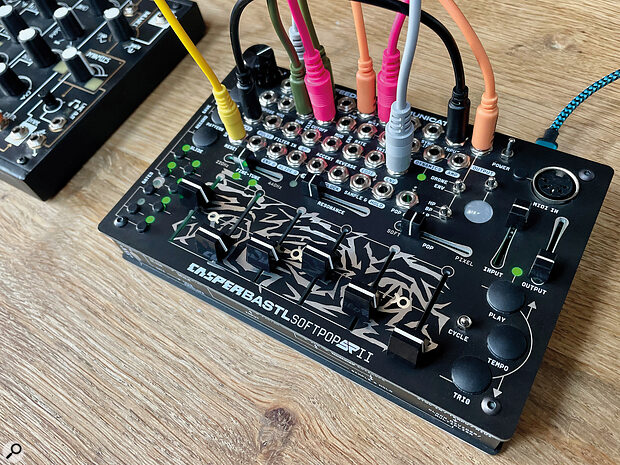 Bastl’s Softpop SP2 reins in the chaos but is still a far from conventional synth.

The Bastl Softpop SP2 is a hyper‑patchable desktop semi‑modular which shares some of the crazed cross‑modulating DNA of the original Softpop, but is way more versatile, tameable and usable. Its defining features include highly performative sequencing, customisable pitch quantising and modulation sourced from sample & hold and the oscillators. Sonically it can serve up classic monophonic bass lines and acid, but also veers off into chip‑tune and generative modular madness.

The SP2 is very recognisably a Bastl instrument (it’s actually a collaboration with Casper Electronics). It has the ice‑cream‑sandwich‑shaped enclosure that looks like it’s slotted together from black, silver‑etched PCBs; however, it feels a lot more grown up than its predecessor — solid, with clicky buttons, throw switches, a chunky metal knob and a dense Eurorack‑compatible jack field. The six main faders are joined by five mini sliders, and the built‑in speaker has been bumped out in favour of a MIDI in port. In photos, the MIDI port serves as a visual reference for how small this thing is. Unlike some previous Bastl boxes, though, it’s not at all fiddly to use on a desktop, and it’s playable when held in your hands like a game controller, twiddling the faders with your thumbs. Power is via USB so you can go mains‑free with a charger pack.

The front edge panel of the SP2 shows an overview of the default patch, and there’s a more detailed version on the bottom showing patch points. The audio path starts with a pulse oscillator whose shape is defined by a ‘triangle’ oscillator running into a comparator (more on why triangle is in quotes in a minute). This feeds into a state‑variable filter, then through a VCA (something the SP1 didn’t have) and out into the world. 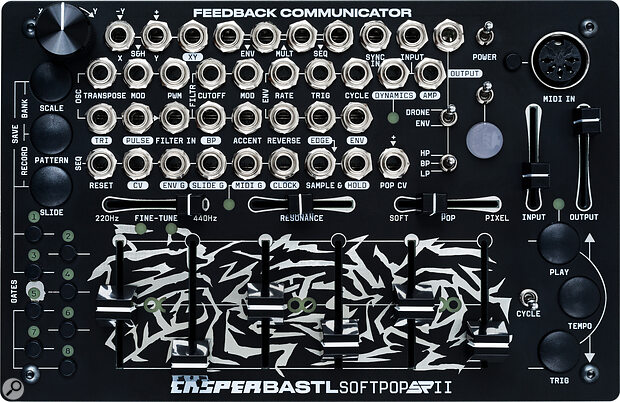 Every surface of the SP2 is covered in diagrams and helpful reminders for the many button combos.

Other than the intriguing business that generates that initial tone, you couldn’t get a more conventional subtractive synthesis scheme. With modulation controls minimised you can achieve a range of ‘classic’ monosynth sounds, and very nice they are too. Looking at the diagram, though, you’ll see that there’s a bunch of modulation in the picture that spices things up considerably, even before you pick up any patch cables.

From left to right the main faders work in pairs, controlling pitch, filter and envelope. The first is the main pitch control, and the second sets pitch mod depth. This mod is derived from a sample & hold circuit which is triggered (by default) by the sequencer. All pitch control and modulation on the SP2 other than the fine‑tune slider is quantised, so the effect of the pitch mod slider is to randomly change notes in your sequence, but always constrained to the current scale.

The next two faders control the filter cutoff and envelope mod amount. Above these, a horizontal slider sets the resonance. The filter has a lovely dusty quality, and can squelch and whistle. It self resonates, which you can draft in as another tone source if you feed it CV from the sequencer. There are low‑, band‑ and high‑pass modes, and the band‑pass gets a parallel output.

The final pair of main sliders set the time and shape of the SP2’s single envelope. The envelope has a simple attack‑release contour, with exponentially curved slopes for a percussive response. The shape control adjusts the proportion of attack and release: fader down gives instant attack, in the middle results in an even rise and fall, etc. The envelope is triggered by the sequencer (unless overpatched) and also has a Cycle mode where it becomes an LFO.

Bastl have set up the Softpop so that it doesn’t take much to steer off the beaten track. The pitch mod is not the only prewired, self‑influencing source of interest/chaos. Above the envelope controls is the Pop slider which introduces audio‑rate mod to the filter from the pulse oscillator. This has a fairly wide range of outcomes depending on the starting tone, the oscillator pitch and also the resonance. For mid to higher notes you get a progressive change as you move the slider, from the natural ‘soft’ sound of the filter, through a varying formant‑type tone, to classic Commodore 64 era pseudo‑noise at the ‘pixel’ end. With resonance up, and especially on the band‑pass, Pop can add acidic stickiness to the filter.