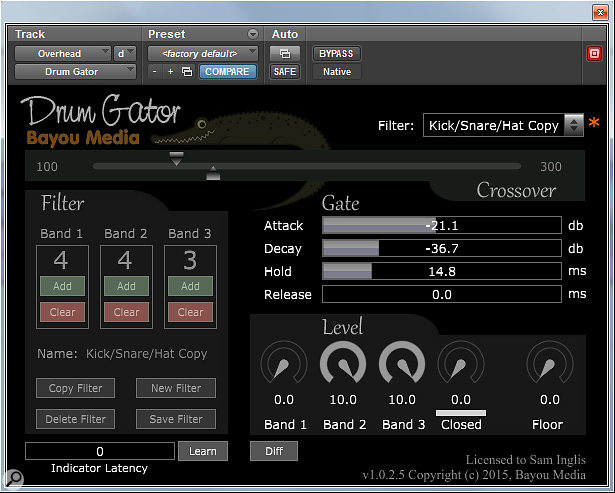 Bayou Media are a new software company founded by plug-in developer Mike Collins, whose first product brings some fresh thinking to the perennial and thorny problem of gating. I’d imagine that most of us use gates most often when working with drum tracks, and as its name suggests, Drum Gator is specifically intended for this role.

Gates are usually triggered by signal level, so setting the threshold becomes a compromise between gating out quiet parts of the wanted signal and letting through loud parts of the unwanted signal. In some cases this can make effective gating using a conventional plug-in impossible, for instance where you want to gate out kick and tom spill from a snare close mic without also cutting out ghost notes on the snare itself.

Drum Gator departs from convention in two ways. First, the gate is triggered not on the basis of signal level but by a transient-detection algorithm which is independent of level; and second, Drum Gator uses sophisticated frequency analysis to discriminate up to three different types of drum hit within the same source signal. So, in theory, it will take a drum track as its input, detect all the transients as they happen, and classify each into one of three bands. You can then simply turn down the dials representing these three bands to attenuate them within the mix; alternatively, you can turn down the Closed dial to attenuate everything else. A further control labelled Floor sets a global limit to the amount of gain reduction applied.

Actually, you don’t have to use Drum Gator in multi-band mode; in Gate Only mode, it operates much like a conventional gate, except that triggering is governed by transient detection rather than raw level. With well-recorded close-mic tracks that don’t suffer too heavily from spill, this is often all you need. For rougher recordings or working on mixed drum tracks and overheads, you have the choice of two multi-band modes. In Spectral Peak mode, the classification of transients into bands is set manually using frequency sliders, but perhaps the most interesting option is the Spectral Signatures mode.

The idea here is that you ‘teach’ Drum Gator the spectral characteristics of the individual elements of your drum track, so that it can ‘learn’ to tell them apart. This is done by setting your DAW to loop around single drum hits until Drum Gator has captured their sonic ‘signatures’, which can then be assigned to the three filter bands — multiple signatures can be added to a single band. A handful of preconfigured signatures are bundled with the plug-in, and on the right source material will give hugely impressive results straight out of the box. For instance, I tried using the factory kick, snare and hi-hat signatures across a drum mix, and was instantly able to use the three band-level controls to radically rebalance the kit, or mute individual elements of it — I can imagine this being an invaluable tool for remixers.

Drum Gator can be very useful in problem-solving roles, too. Provided the drums you want to identify in the track are sufficiently well defined that a signature can be captured, it will generally trigger more reliably and sound more natural than a conventional gate. There are of course limits to what it can do, especially where two or more drums overlap in frequency range, and I think the user interface could be made more intuitive — some controls are disabled in some modes, but there’s no real visual indication to tell you this — but overall, this is a highly promising and very affordable step forward in dynamics processing.