Making Music On The Move By Tom Flint

Synthesized And Modulated Musical Instrument is the full name of SAMMI, which is a free iPhone, iPad and iPod touch app that includes a sequencer, tone generator (labelled Drone) and virtual Theremin. Although the three instruments reside within the same app, they cannot be used at the same time and therefore cannot interact.

The developer is Chris Ayles of Futronica, who set out to provide a set of tools for use by a London-based electronic/ambient/drone project called the Special Effects Department, which I suspect is very much influenced by the work of Brian Eno. Consequently the app’s tools are geared towards making a certain kind of gentle ambient music. 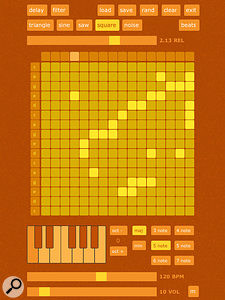 The sequencer is based on a grid with up to 32 steps going across the screen, and notes down the vertical axis. Strangely, there is no on/off button, so the sequencer is constantly running, as indicated by a lighter-coloured square which moves step by step across the top of the grid. Silencing the sequencer is done using either the mute button or the volume slider. Sliders also control the bpm, which ranges from 10 to 200, and note release time. Beats are added or taken away from the grid simply by touching its squares, and it is also possible to drag a finger across them to create a pattern that’s a little more random.

Sound wise, the sequencer is quite limited, but that’s all part of its charm. The sounds are derived from the free Tonfall library and are simply triangle, sine, saw, square and noise waveforms. There is also a rather simple but nice delay that can be applied, plus a filter with a range of band, pass and shelf options.

Many sequencers allow the user to create multiple patterns and place them in some sort of order, but SAMMI takes a different approach that makes it more of a live performance instrument. It works by allowing instant pattern changes to be made from a range of preset configurations. For example, a panel of buttons are used to switch the scale between major and minor and shift it up and down an octave at a time. Then there are buttons which change how many notes appear in the scale, the options being three, four, five (there are two variations of a five-note scale), six and seven. Importantly, the pattern that’s programmed on the grid remains the same — only the notes assigned to each row on the Y-axis change — so choosing different scales while the pattern is playing creates subtle musical shifts. Finally, there is a 12-note mini keyboard which shifts the sequence to whatever note is played.

This may sound a little complicated on paper, but it’s very simple to operate and great for creating mesmerising musical sequences.

Like the sequencer, the drone instrument is immediately active when opened and has its output controlled via a mute button and volume slider. It shares the same waveforms (triangle, sine, saw, square and noise) and the same filter and delay parameters as the sequencer, but adds an LFO for modulating either volume, pitch or filter, plus a 16-step sequencer. Best of all, though, there are four separate oscillators running concurrently, so by programming varying step rhythms and choosing different waveforms, LFO modulations and filter and delay settings for each one, some interesting layered patches can be made.

The app’s Theremin is the simplest of the three instruments. Once open, almost the whole screen becomes a control pad with volume mapped to one axis and pitch to the other. All the user has to do is move their finger over the screen to operate the instrument, although it’s also possible to set the instrument to Tilt, so that angling the hardware controls the sound.

Its tone is based on the same triangle, sine, saw and square waveforms as the other two instruments (noise is not an option this time) and it offers the same delay. Fine tuning is done by narrowing or expanding the frequency range (100 to 15,000) and altering the starting note.

It doesn’t quite have the same wobbly character of a real Theremin, but it performs a similar kind of job. Obviously changing waveforms alters its tone a great deal, but it’s also possible to turn off the interpolation to change the sound from a continuous pitch sweep to a series of beeps!

Settings can be saved as presets for all three instruments, but there are no export options as yet so the audio output of the host device has to be used instead.

SAMMI does have a few bugs: on my iPad 2 running iOS 8.3 it crashed occasionally, but it would be ridiculous to complain given that it’s free. I certainly recommend giving it a try. The Theremin is a must-have and the sequencer may well take you into ambient territory you’ve never visited before. Tom Flint

Yuri Turov’s Xynthesizr is part sequencer, part synthesizer, but can also function as a MIDI controller when used together with other apps and devices.

Its opening page shows the sequencer grid, which is 32 steps across and 22 notes high, and coloured in such a way that it looks more like a panel of Photoshop colour swatches than a typical sequencer. Each of the steps is represented by a square, and each octave by a different colour. Notes within the octaves get darker the lower they are in the scale, and the first row of every bar is darker than the rest to mark its position. Programming notes is simply a matter of tapping a square, or dragging a finger across multiple squares, and those that are activated becomes brighter than the rest.

Cleverly, a two-fingered tap on the screen is used to delete all the notes in an octave, and a three-finger tap removes all the notes from the grid. A second tap with two or three fingers undoes the delete actions. If fewer than 32 steps are selected, the unused steps become dark, so it’s easy to see the active sequence.

There’s no level control for individual notes, but there is a Velocity pop-up panel which enables the user to set the level for every step. This is done by dragging columns up and down and/or drawing in a curve, and is a very fast and easy way to work. 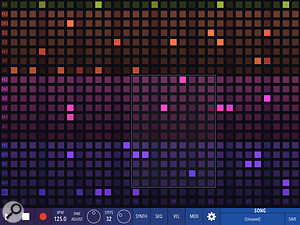 Xynthesizr’s many-coloured sequencer page...Flying in the face of convention, Yuri has placed the app’s control panel at the bottom of the screen rather than the top. The panel contains the transport, bpm and step-number controls, as well as buttons that trigger pop-up pages. These pop-ups include a settings page, preset menus, sequencer controls and all the parameters for the synth section.

The synth itself is beautifully laid out and very easy to use. There are two nearly identically equipped oscillators, each with five pitch settings and five wave shapes, but one of the oscillators also includes fine pitch and tune controls. Amp and filter ADSR envelopes are also part of the synth and there are two LFOs, each offering a choice of five wave shapes and target parameters, such as filter cutoff, the pitch and amplitude of the oscillators and the second oscillator’s detune. In terms of effects there is a delay and reverb, plus an unusual pan control that randomly selects a pan position for each individual note according to the stereo width setting.

Once a sequence and sound have been programmed, more fun is to be had by opening the sequencer’s control panel, where all sorts of dramatic changes can be made in real time. Here the user can choose a scale from a list of presets, or even create a custom scale of their own. It’s also possible to set the steps’ length, to tie consecutive notes together, and even flip the entire sequence! 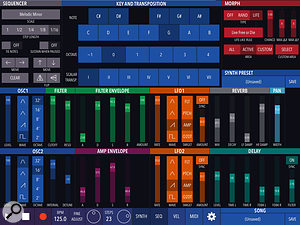 ...and equally colourful synth screen.Another section called Key and Transposition provides three different ways to shift the key of the sequence. The first is by way of a virtual one-octave keyboard; the second provides octave shift buttons (-1, 0, 1, 2, 3 and 4) and the last is a set of buttons that shift the sequence by a fixed number of scale steps.

The final sequencer section, called Morph, is dedicated to generative tools. A morphing option called Rand randomises the sequence within the horizontal and vertical bounds set by two sliders. The second morph option, called Life, uses Conway’s Game Of Life as a means of generating sequence changes, but the user is also given the chance to create their own set of behavioural rules. Impressively, the morphing can be limited to a selected area, allowing a changing sequence to retain certain key characteristics.

In terms of MIDI, Xynthesizr is quite well equipped, even to the point where each of the 22 notes can be mapped to a MIDI channel. Naturally this capability provides much potential for controlling other devices.

As for audio, Audiobus 2 and Inter-App Audio are supported. Output options include AudioCopy, AudioShare, SoundCloud and Mail. Slightly disappointingly, the sent file is an MP4a rather than a WAV, so hopefully future updates will provide a choice.

Overall, Xynthesizr is a very interesting instrument that is fun to play and lovely to look at. In its current version (1.4.1), there’s no way to drag the sequencer grid about to reveal octaves that are hidden by the pop-up windows. This means that programming and note-pattern editing can’t really be done together, which is the app’s only significant shortcoming. The synth section isn’t the most complex of its kind, but it is very immediate and still flexible enough to provide a pleasing range of rather nice sounds. The sequencer works well and lends itself to experimentation, but can also be played more conventionally using its Key and Transposition tools. In a nutshell, the app is easy to use, lots of fun and a easily worth the asking price. Tom Flint