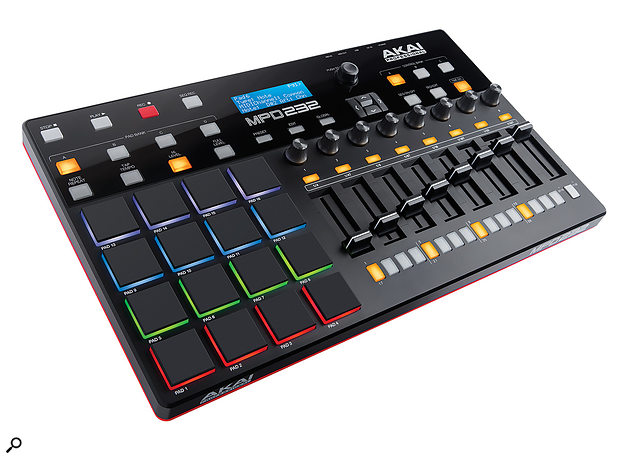 Can new pads and a step sequencer keep Akai’s MPD pad controllers top of the class?

M-Audio’s revival of the Trigger Finger proved there’s still a healthy market for generic MIDI Pad controllers, in spite of the popularity of all-in-one workstation hybrids like Maschine, Push and Akai’s own MPCs. Now Akai have refreshed all three of their MPD models with the new slimline styling we saw recently on their updated APC. As well as the physical update, the high-end model adds a built-in sequencer, and there’s a bundled software package to sweeten the deal. We had the 226 and 232 models on test.

The MPD226 and 232 offer roughly equivalent controls and features to the previous generation, but as with the APC MkII, Akai have rearranged everything to line up the faders, knobs and buttons into a mixer-style formation. The 226 actually loses two faders and two knobs compared to the earlier MPD26, although does gain four programmable buttons. The 32 has lost its Footswitch and Expression Pedal inputs. In addition to two discrete MIDI ports over USB, both models still feature physical MIDI I/Os, which are now connected via the increasingly common space-saving mini-jack adaptors.

The most significant upgrade is the new trigger pad design with the simple, if somewhat tautological, name “Thick Fat MPC Pad”. They are indeed thick, and, what’s more, fat; they’re reassuringly solid, and have a lovely grippy soft rubber finish. They also now feature full-colour backlights. True to their heritage, they really are very sensitive and dynamic. Settings are provided for changing the sensitivity, choosing a response curve, and adjusting how hard the pads need to be hit to reach full velocity. I found them almost too sensitive and had to adjust my playing style to avoid false triggers, but once I’d got used to this I found them really enjoyable and expressive to play.

Of course, Note Repeat mode is available, sync’ed to your DAW if External Sync mode is enabled, and this provides endless fun and inspiration and makes the pressure-sensitivity of the pads especially valuable. MPC-style Swing can be applied, although you have to dig into a menu to find it. If you’re running stand-alone, tempo can be set with a dedicated Tap Tempo button, which is also used for the internal sequencer of the 232.

Turn On, Plug In, Drop Beats

The MPD2 range ships with Ableton Live Lite and MPC Essentials, making sure that new users have some way of making noise with their device. Sound sources come courtesy of Sonivox, with their Big Bang Universal Drums and Cinematic Percussion plug-in instruments. Most SOS readers buying a pad controller will of course be adding it to an existing setup. In my case this is a mixture of Live, Reason and a bit of Pro Tools. I started with the latest version of Live 9, which automatically detected and set up the controllers. 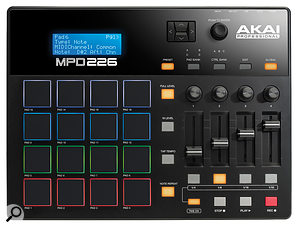 The MPDs can store 30 preset configurations, of which 14 come pre-loaded with mappings for common DAWs and several InMusic Brands virtual instruments. An excellent software utility is provided for editing, storing and loading the presets. Preset 1 is Live, so I was straight in and controlling Live with no setup required. The Live template uses Ableton’s dynamic remote scripting, so clicking on a device is all that’s required to re-focus the MPD’s controls. These are optimised for controlling Drum Rack devices, which enjoy bankable pad control, and Macro control from the knobs. A limitation of Live is that you can’t assign a MIDI source to bank up and down the Drum Rack pad range, but a handy trick with the MPD is the ability to assign key strokes to controls, as well as all the usual flavours of MIDI messages. I mapped the up and down cursor keys to the first two assignable buttons and was then able to bank through all available sounds.

The MPD226 & MPD232 share the same rear-panel connections: an external PSU input, USB port and MIDI I/O on 3.5mm jack sockets. Faders are mapped to Live’s mixer, with the three switchable control banks giving access to 24 tracks. The transport controls map to Stop, Play and Arrange Record. I find Session Record more useful when recording clips, so mapped that to another of the spare buttons. Controls can be set to Momentary or Toggle modes; Momentary proves particularly useful in this case, allowing you to punch in for short amounts of time by holding the button. Sensibly the knobs default to Device Macros, giving you control of the most important parameters on the selected device. 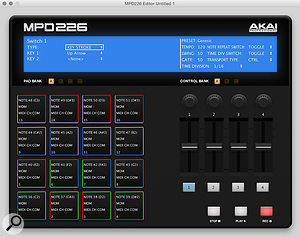 The MPD2 Software Editor. Buttons can be assigned to keyboard commands as well as MIDI.Next up was Reason, which worked great because the existing detailed controller codec for the original MPDs translates near perfectly to the new models. This time all faders, knobs and buttons are focused on whichever device is selected. Unfortunately neither the Live or Reason presets provide a way to play note-based devices outside of the basic 16-pad window — pads within a bank are hard-assigned and can’t be transposed, and the other banks are set up as different MIDI channels rather than extra notes. These days it’s pretty common to work with a pad controller to play synths as well as drums (something pioneered by the MPC, after all), so without a transpose function, you’d probably want to edit the Preset and spread notes over the four pad banks, or create different presets for instrument- and drum-based devices. This is made very easy with the software editor’s Auto Populate tool.

In his recent Beatstep Pro review, Paul Nagle speculated that this may be the year of the step sequencer. Manufacturers certainly seem to be responding to a renewed interest in stand-alone devices that can sequence both software and hardware sound sources. The top-of-the-range MPD232 joins the party with a built-in 32-step, 64-track sequencer. Sequences can be programmed pad by pad in classic X0X style using the 16 buttons along the bottom of the panel. Alternatively you can capture patterns by playing the pads.

Real-time recording is initiated with a dedicated Sequence Record button, while step editing requires you to enter a Seq Edit mode. Tapping a pad selects it for editing, but unfortunately the pads don’t actually play when in edit mode. Akai are looking at changing this, but one wonders whether a dedicated edit mode is needed at all?

As a stand-alone sequencer triggering other synths, all was as expected, but I did have some problems when sync’ing with my DAWs. In External mode the MPD232 can follow MIDI Beat Clock, which is what you’ll want to do to sequence your plug-in instruments like Live’s Drum Racks. Initially, all seemed good, looping in Live’s Session view, and I tweaked my offsets and latency compensation until I could generate sequences in sync and capture them into clips. However, I soon found that stopping and starting, or starting from anywhere but Bar 1, Beat 1 would cause the MPD to get out of step. This was the same and worse in Reason and Pro Tools. Akai believe they’ve identified the cause of this issue, and hopefully will have made progress by the time you read this.

The ultra-sensitive and dynamic pads on the new MPDs should prove popular with even the most serious finger drummers, as will the lighter, slimmer design. Anyone looking for a traditional programmable pad controller for gigging as well as studio work couldn’t go wrong with the 226. The new layout of the 232 makes it somewhat larger and probably steers it towards studio production. The built-in sequencer is pretty basic with no pattern memory, but is a fun extra that can provide a bit of inspiration, and would be useful in a hardware synth setup.

There’s no shortage of controllers with drum pads on the market, but choosing is made easier by the differences in focus between the devices. The Korg Pad Kontrol was a direct competitor to the previous MPDs, and as such is beginning to look dated, but still has a nice twist with its touch pad. If step-sequencing capability interests you as much as direct playing, then Arturia’s Beatstep Pro is probably the way to go. If your priority is size and portability then there’s IK’s iRig Pads, and mini controllers like the Korg Nanopad, or even small controller keyboards with built-in pads like M-Audio’s Code25, but the baby MPD218 is better. If what you’re really looking for is an integrated workstation, you could look to the MPCs or Maschine, or for Live users Push or the Launchpad Pro. Somewhere in between you have M-Audio’s Trigger Finger Pro, which is the most directly comparable alternative to the MPDs. The Trigger Finger has a stronger software package and a more feature-rich sequencer, and is trying to have its cake and eat it as a production workstation as well as a controller. It’s a more rounded package, but the MPD’s more focused remit and better pads maintain its best-in-class status as a generic controller.

If you’re looking for a great all-round pad controller, the MPD226 is the new sweet spot of price versus performance. The MPD232 has even more features, but if you’re really after a production workstation or step sequencer there may be better options.

Everything You Wanted To Know About Studio Headphones.
3 weeks 1 day ago.