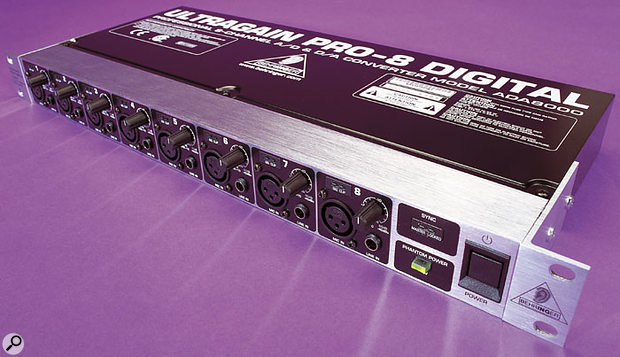 Eight channels of mic preamplification, A-D/D-A conversion, and ADAT lightpipe I/O, all at a remarkable price. Is it too good to be true?

Behringer's ADA8000, or the Ultragain Pro-8 Digital to give it its full name, is a conceptually simple product that should interest anyone who uses ADAT connectivity within their system. Its mains-powered 1U rack format houses eight mic/line preamps with phantom power, and these feed an oversampling delta-sigma A-D converter, which in turn sends eight channels of 24-bit digitised signal out of the back panel via an ADAT lightpipe connector. These preamps use the same Invisible mic preamp circuitry found in the newer Behringer mixers, and my experience of them so far has been favourable. Phantom power is switchable globally, so the preamps may be used with active DI boxes or capacitor mics that need a 48V power source, and each of the channels has a rotary gain control (with up to 60dB of gain) plus a pair of LEDs to show signal present and clipping. The line input is on a balanced TRS jack and mic/line input selection is accomplished simply by deciding which socket to plug in to.

The unit also features an ADAT lightpipe input that feeds a D-A converter, where the analogue signals emerge as electronically balanced XLR outputs on the rear panel. There's a word-clock BNC input to allow control from a master clock source, and a slide switch on the rear panel sets the unit to master or slave mode (with a choice of ADAT or word-clock sync) at a choice of 44.1kHz or 48kHz internal clock rates. I would have preferred this switch on the front panel, where it would be more accessible, and I'd have liked more digital status displays, though I don't know where they could have put them.

Other than the mic/line preamp connectors and controls, the only other front-panel features are a mains power switch, the phantom-power switch, and LEDs to indicate master/slave status and sync lock. There's no sample-rate indicator on the front panel, though, which is mildly inconvenient.

However, the only important practical feature missing is a means to route the eight preamps directly to the eight analogue outputs, as at this price I'm sure there are countless non-ADAT users who could find a use for eight decent mic preamps in a rack. No mention of this limitation is made in the manual, and no suggestion for a workaround is provided, but the obvious solution is to use an optical cable to connect the ADAT input and output ports together. This works fine, and though the signal is making an unnecessary trip through the converters, the signal quality is subjectively very good. If a MkII version is due any time soon, might I suggest some form of switching — a DIP switch on the rear panel for example — that could be used to route some or all of the preamps directly to the line outputs without going via the converters?

To the left of the XLR analogue output connections on the rear panel is a BNC word-clock input, and a choice of digital synchronisation options is available from its adjacent switch.Photo: Mark Ewing

I'm glad to say that the line inputs only need to see a signal level of +6dB with a gain setting of +10dB to register a digital full-scale reading, so you don't have to drive huge signal levels into the thing to get your digital record meters up to a healthy level. On the other hand, the maximum line input level is +26dB, so if you do happen to have signal sources that deliver very hot levels, it can handle these too.

The dynamic range of the system is quoted as 103dB nominal, and the frequency response is 10Hz-21kHz at a 48kHz sample rate. The analogue circuitry of these preamps goes rather higher than this — it's simply the sample rate of the converters that imposes this limit. There are also no noise figures in the spec, though I don't think the manufacturers are hiding anything, as there's no audible noise when working with capacitor mics in a typical close-to-medium-distance studio-miking situation. Subjectively, the mic amps compare well to those used in better project studio mixers, and though they may not qualify as esoteric, I have no qualms about their quality and would be happy to use them in any routine application. Even if you have one or two up-market stand-alone mic preamps to handle your main inputs, a unit such as this is still ideal for those situations where you have to mic a drum kit or record several musicians playing together.

In my own studio, I plan to use an ADA8000 to utilise the ADAT input port on my MOTU 828 interface, so that I can have access to more mic and line inputs over and above the existing analogue inputs. The tests I've done so far confirm that this works perfectly, with no fuss, provided that you remember to set the 828 to its ADAT optical sync mode. The ADA8000 would also be useful in conjunction with an ADAT recorder for very simple live recording, though you'd still need a simple eight-channel line mixer to provide a meaningful headphone mix for monitoring.

If price were no object, I'd say the ADA8000 should have more detailed metering, its rear-panel sync switch is difficult to access in most rackmount setups, and there really should be some way to send the preamp signals directly to the line outputs. I might also say that having XLR line outputs is overkill on a unit of this kind where most users would probably prefer to use TRS jack cables to connect with the back of their patchbay. Having said that, price clearly is an issue, as the unit costs less than most single mic preamps in the UK, yet it does what it sets out to do extremely well. I've already bought one to add to my system, and its subjective performance is as good as from units costing several times the price. It will also save me acres of rack space!

The ADA8000 is such a useful and nicely presented piece of kit that you have to do a double take when you see the price. A useful addition to any system, with free ADAT sockets!