A small preamp with a deceptively classy sound.

Behringer's little Tube Ultragain MIC100 is one of the least expensive mic preamps I've used to date, yet it includes tube circuitry, and integral limiter and a decent LED level meter. Housed in a folded steel case, the MIC100 has both a balanced XLR mic input and an unbalanced, high-impedance instrument input to suit guitars and basses with either passive or active pickups. Its mic amp stage is based around a 4580 low-noise amplifier chip and the 12AX7 dual-triode tube follows this to add a little warmth. I'm always a bit suspicious of tubes run at low voltage, which this one is, but the designers have resisted the temptation to be unsubtle, and the overall sound is surprisingly neutral. 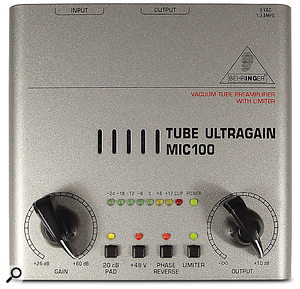 The preamp has buttons for a 20dB pad, phase inversion and switchable 48V phantom power (all with status LEDs), and balanced outputs are available simultaneously on TRS jack and XLR. There are also two controls with traditional chicken-head pointer knobs. One of these sets the amp gain over the range 26-60dB, while the Output control provides a means of matching the output level to whatever the preamp is feeding. The latter has a range from fully off to +10dB of additional gain, so the maximum available gain through the unit is 70dB. An eight-LED meter monitors the output signal, where the top LED is a Clip indicator. A further green LED shows that the unit is powered up.

As if this weren't enough, the unit also includes a limiter, which works at a fixed threshold when engaged. This comes between the preamp Gain and Output controls, so using a high Gain setting and a low Output hits the limiter hard, while using a lower Gain setting and a higher Output setting has the same effects as raising the limiter threshold. Used as a safety net, which is its primary purpose, the limiter operates extremely smoothly, though it isn't fast enough to prevent brief overshoots.

If you deliberately push it into limiting all the time, using, for example, a guitar signal, the result isn't dissimilar to a guitar compressor pedal set with a fast attack and a medium release time. Indeed, this pumps quite musically and could be nice as an effect on guitar or bass. The only downside is that the manual neglects to say anything about the limiter other than that it exists, and there's no limiter LED to show when limiting is taking place.

The written spec for this unit omits any mention of a noise figure, though in practical studio tests with a capacitor mic, noise wasn't an issue, even when recording a violin from three feet away. The frequency response is 10Hz to in excess of 40kHz (±3dB), and the XLR output can deliver up to +26dBu into 100kΩ before clipping.

It's difficult to describe exactly how well a preamp works, but I tend to have three mental categories, and into the bottom one falls those preamps that really don't cut it at all — the sort of thing some multitrackers or early digital mixers were fitted with. Next up are the ones that don't cause any problems in normal studio use and you can generally forget about them and just get on with the job. At the top of the tree are the really esoteric preamps which, in combination with a good mic, sound silky, smooth, pristine and generally wonderful. They also tend to cost several hundred pounds per channel!

Despite its laughably low cost, the MIC100 falls into the second category, and if you don't push the tube or the limiter, it sounds clean and lively with no obvious noise. I used a Sennheiser MKH-series capacitor mic to test it with speech, mandolin and violin, and in all cases, it turned in the kind of performance I'd expect from the preamps found in good analogue mixers or voice channels costing up to £300 or thereabouts. If you push the limiter and tube a bit harder, the warmth aspect gets a bit artificial, but it's still usable in the right context.

A decent phantom-powered mic preamp at this UK price would already be good value, but one with a tube and a limiter as well is just silly. The quality is good enough to handle typical project studio recording tasks with ease, and if you're working with a soundcard or other device that either has no mic inputs or only has poor ones, the MIC100 is a great cost-effective solution that will get the job done in a certain amount of style.

Cheap and cheerful it may be, but the Tube Ultragain MIC100 is capable of surprisingly good results.