Bereich03 are small manufacturers of audio outboard gear, based in Munich, Germany. When I say small, in fact they currently only produce one device, and their main business is not gear but audio production. The designer, Michael Heilrath, felt he lacked something to impart analogue saturation to his digital recordings and this, the Density harmonic saturation processor for the API 500‑series 'Lunchbox' system, is the result. 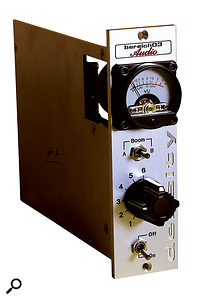 There's little to say about the build quality that you can't judge from the main picture. Suffice it to say that everything is up to decent professional standards and, like so many bits of boutique gear, you get quality 'name' components on the circuit board — Burr Brown op-amps, Wima capacitors and so on. Other than the on/off byass switch, there are only two controls on the outside. One, a toggle switch, governs the saturation curve (bass boost, mid‑to‑bass lift and linear) and the other, a chunky knob, allows you to determine the amount of saturation. So from a user point of view, it really couldn't be simpler — unless, I suppose, they'd omitted the warmly lit, vintage‑look VU meter. Inside this device, though, you have access to a couple of jumper switches that allow you to increase or decrease the input and output levels (‑16db to +8db). There's also a preset pot for meter calibration.

But what does it actually do? I received a pair of these for review and, as suggested in the brief but useful manual, I hooked them up to my DAW as an external plug‑in and ran various sources through them: drums, bass, distorted guitars, and so on. The manufacturers don't suggest that the Density is intended as an analogue tape emulator — rather, it's simply about generating some pleasing harmonic distortion and saturation. Certainly, there are no transformers or inductors. Nonetheless, the sound at first put me in mind of some of the better tape emulators out there, such as the Rupert Neve Portico 5042, so I lined it up alongside a couple of those and some 500‑series preamps and compressors, to provide reasonably familiar points of comparison.

The best way I can describe the sonic character is pleasantly thick and warm, in a similar sense that I'd apply those words to the Portico 5042. As with all such devices, the harder you push it, the softer‑sounding things get — but, as the name suggests, it can be pushed quite hard before you start to lose any real solidity, and it does some really pleasing things en route. In particular, I enjoyed what happened to bass guitar and bass synth sounds, which came out sounding satisfyingly rounded. I was also able to tame some annoying fizziness in distorted guitars, and loved what happened to snare drums. Try as I might, I wasn't able to achieve the same sound using plug‑ins, and while the Portico and the Sound Skulptor STS offered a similar sort of analogue‑ness, they also sound rather different.

I'd advise exercising a little caution to anyone using a pair of Densitys on a bus. They could certainly have a place there if used subtly, but if you've tracked or mixed sources through them already, it would be easy to overdo things. For tracking applications, one of these would make an ideal character‑imparting partner for a clean‑sounding mic preamp, though, or for a DI'd instrument.

My only real criticism is that setting levels can be a little fiddly. Heilrath has attempted to compensate for the gain automatically at the output level, and while that's useful, it's not 100 percent successful (although, to be fair, he acknowledges this in the manual), which means that it's hard to confidently A/B compare different settings. But that's a minor point: the Density is all about the vibe, and you have a DAW and converters for metering in any case. This processor sounds good, and, as these things go, the price is far from being exorbitant — so I'll happily give the neat little Density the SOS thumbs‑up! Matt Houghton

Thanks to KMR Audio for the use of a Lunchbox during this review.