Making Music On The Move 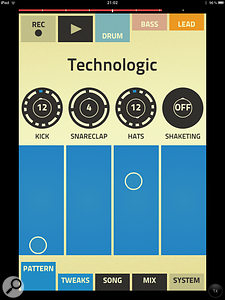 Figure is an iPhone app with its focus on instant music-making. Notable for being the first iOS outing from Propellerhead, its instruments are lifted straight from Reason's Thor synthesizer and Kong drum designer. At the moment there's no iPad-specific version, just a '2x' box to expand the simple graphics.

This is one of those 'no musical knowledge required' apps, the idea being that a two-bar tune consisting of drums, bass and lead can be rustled up by anyone. A Kaoss pad-like interface means that Figure is as welcoming as a warm fire and slippers.

To get started, first select Drums, Bass or Lead, then swipe sideways through the available patches. That done, you can play individual notes by tapping the screen or, alternatively, trigger notes in any of the 16 preset patterns by holding down a finger. Pattern density is illustrated by a graphical wheel and you can swap to a new pattern at any time — even after recording. 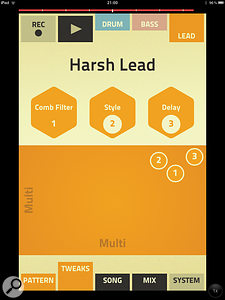 Each of Figure's synth patches can be adjusted in the 'Tweaks' page.Via tabs along the bottom, you can switch neatly from pattern recording to the mixer screen, to parameter tweaking or to song-level settings such as key, tempo and scale — no wrong notes here! To further minimise complication, the tone-adjusting parameters are pre-selected for every patch and served up on an X-Y axis. Up to three pairs of parameters can be controlled simultaneously, and the results captured by hitting the record button. Beware using too many fingers or you risk triggering the iOS5 'app swipe' function, which is something to avoid, because Figure stops playing when in the background.

So what of the sounds? Happily, they're big and chunky, the drums, in particular, exceeding expectations. There are 13 drum kits, with names such as TR-BOB, Studio, Old School and Glitch, and four drums in each kit. Some drums have an alternate sound at each end of the pad (for example, hi-hats). The 32 bass and 46 lead patches are all contemporary and usable, especially with some tweaking, and often they include effects such as delay to add extra polish. For a final finishing touch, the mixer bundles in pumping side-chain compression too!

Figure's main limitations are its lack of any form of synchronisation and its inability to export the songs you create. Nor can you store more than one song internally, but at the asking price of 69p99c it's still a fun little app to jam with and I surprised myself by returning to it again and again. Go Figure. Paul Nagle 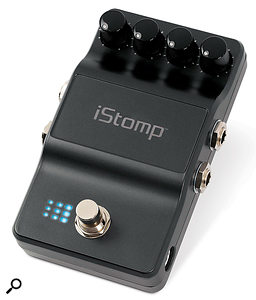 The iStomp has broadly the same footprint as a normal guitar pedal, although the body is a little shallower.

It must be at least 20 years since I read of the imminent demise of the individual guitar effects pedal: the new breed of digital multi-effects, with their greater versatility and programmability would kill them off within a year or so, we were told. It doesn't seem to have happened yet, however, and, if anything, the individual pedal market is healthier than ever, with the proliferation of boutique, small-scale designers.

There's obviously something that we like about individual, dedicated boxes: this one does this, that one does that — you know where you are with such a setup. When you want something different in your armoury, you take one of the pedals off your board and buy another one to go in its place, perhaps to do a different job, or the same job, just differently. Guitarists are in their sixth decade of working that way, and many of us have got a cupboard full of temporarily discarded pedals to prove it.

TC Electronic, with their TonePrint range launched last year, introduced us to the idea of an individual effects pedal to which new programs can be downloaded, but Digitech have now taken this concept to its next logical stage: their iStomp units can be reprogrammed to be any type of pedal. Using an iOs device (iPad, iPhone or iPodTouch) and the supplied 'Smart Cable', you can download any pedal 'personality' you choose into your iStomp's 'brain', otherwise known as an AudioDNA2 DSP chip.

The hardware is a simple black box, shallower than most pedals, with a footswitch and four control knobs, as well as two pairs of quarter-inch jacks, permitting full stereo in and out, if you wish. Power is via (a supplied) external 9V DC adaptor only, with no battery option, as the specified current requirement is 150mA. The control knobs have no markings, as their functions can change entirely, depending on what pedal type has been downloaded. 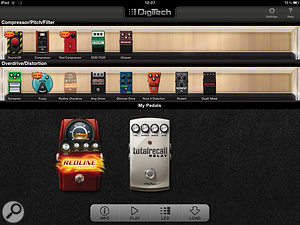 Digitech's Stomp Shop app, showing the pedals available to buy at the top and those supplied free with the iStomp at the bottom. 'Pedals' are downloaded from Digitech's Stomp Shop app, which offers a range of classics and original designs, costing up to £6.99$8.99, according to complexity and whether there is a third-party licence involved. Although downloading a new pedal overwrites what was there before, you can always restore a previously purchased pedal without having to buy it again. Stomp Shop also offers audio demos of the pedals and the ability to download a time-limited trial version, so you can try new pedals with your own amp and guitar setup.

The hardware ships with the distinctly low-tech solution of a set of stickers to identify the control functions. A small screen would obviously be nicer, but I guess that's a price-point trade-off. If you happen to be using multiple iStomps, you can decide on the colour of the On and Off LEDs of each.

Two effects are downloadable free of charge to get you started: the Redline Overdrive and Total Recall Delay. Both are surprisingly good, the delay in particular showing that the iStomp is based on some good, solid audio engineering, with clean digital conversion, low noise (101dB signal-to-noise), and plenty of input headroom (maximum 7.8dBu). It joins the T-Rex Replica on the very short list of pedals that can sit quite happily in the loop of my favourite Mesa without clipping. Even better, and unusual in a pedal-type delay, it offers 'dynamic delay', with the dry signal attenuating the repeats by a user-set amount until you pause playing and allow a tail to come through.

In short, this is not a 'me-too iDevice': this is a really useful concept, well realised via good-sounding hardware, which makes me wonder why it is restricted to iOs devices. Why not Android too, and Macs and PCs? Nice though the iStomp is, if I didn't already have an iPad, I'm not sure I'd get one just for this. A digital audio interconnect, so users of multiple iStomps need only pass through an A-D at the start of the chain and a D-A at the end, as opposed to both for every pedal in the chain, would also have been nice.

Those few quibbles aside, Digitech's iStomp is well conceived and well realised, and definitely goes on my recommended list. Dave Lockwood 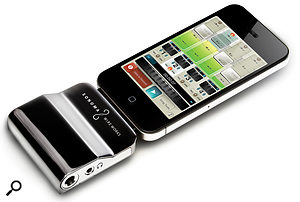 The GuitarJack 2 plugged into an iPhone running Sonoma's FourTrack app.

The GuitarJack Model 2 is a premium guitar interface for iOS devices that allows you to connect a guitar to a true high-impedance input and benefit from all of the processing power an iOS device has to offer.

The moment you unpack the GuitarJack 2, you can tell it's in a different class to most iOS guitar interfaces. While the iRig and Peavey Ampkit are good products in their own right (and a lot less expensive than Sonoma's offering) the GuitarJack Model 2 is made of metal and finished with a dark silver shine, which is much nicer than the plastic housings of its competitors.

The Model 2 version is designed for iPhone 4 and up, iPad 2 and up, and the latest iPod Touch models, and plugs into the dock connector. The previous Guitar Jack (Model 1) is precisely the same in form and function, except that the layout of pins in the dock connector allows it to work with earlier Apple devices.

On the right-hand side, there's a full-size quarter-inch jack socket for your guitar (which can be switched to high or low impedance) and a 3.5mm headphone socket. On the left-hand side, there's a 3.5mm microphone input. This means that you can record using a vocal mic as well as a guitar input, if you can find a nice mic with such an output connector.

Upon plugging the GuitarJack into my iPhone for the first time, I was offered a link to the App Store, via a dialogue box, where I was subsequently prompted to download one or all of the apps designed for use with the GuitarJack and my device. There are two free apps and two paid-for offerings to choose from overall, though the GuitarJack is also compatible with many third-party iOS apps. 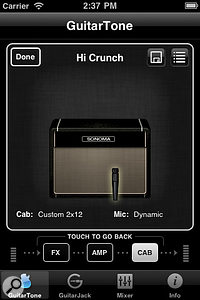 Sonoma Wire Works' GuitarTone app in action. Sonoma offer paid-for recorder apps for each iOS device — StudioTrack for the iPad, and FourTrack for the iPhone and iPod Touch — plus the free GuitarTone and Taylor EQ for both; these last two provide amp simulation for electric guitar, and tone sweetening for acoustic guitar respectively. GuitarTone also allows access to all settings for the GuitarJack 2 hardware, including input selection and gain. Taylor EQ is the simpler of the two apps, giving the user six satisfying acoustic guitar models to choose from, as well as a six-band parametric equaliser. There are no in-app purchases available in Taylor EQ, but that certainly isn't the case with Guitar Tone, which provides a vast number of amp, mic and cabinet models through in-app purchase.

The models in GuitarTone are pretty familiar, based on the usual suspects: Fender Tweed, Vox AC15 and AC30, Mesa/Boogie Triple Rectifier and other popular amplifiers, while plenty of cabinets and mics are also represented. Everything does a good impression of its real-life counterpart, considering, and I'd be happy to use the app for live performance or demo recording.

I did come unstuck with the hardware a couple of times, although it was more Apple's fault than Sonoma's. The jack connection is incredibly sturdy, much more so than Apple's wimpy dock connector. The unnerving result is that when you try to unplug your guitar, the GuitarJack often frees itself from the iOS device before it relinquishes your jack lead! Also, as with many accessories, the GuitarJack wouldn't fit while my iPhone 4 was in its third-party protective case.

I wouldn't mind the dock-connector weakness so much, but for the fact that trying to remove the jack lead resulted (at one point) in the naked iPhone flying to the ground, my in-ear monitors being yanked from my head and me being left holding a GuitarJack dangling on the end of a cable, while praying that the glass on the phone hadn't cracked. In other words: yes, I'm clumsy, but you need to take care if you expect the dock connector to hold any weight.

What makes this unit really stand out, though, is the sound quality: using its own A-D and D-A conversion and high-quality input circuitry, the GuitarJack presents a crisp, clean sound, which has a lot more life and vitality than that of most iOS guitar interfaces. If you're serious about playing guitar using an iOS device, the GuitarJack 2 is certainly the nicest portable solution I've yet tried. JG Harding